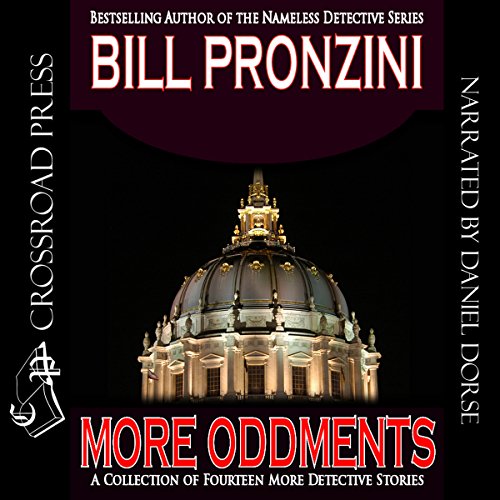 More Oddments features 14 more detective stories featuring characters such as Fergus O'Hara and the "Nameless" Detective. The stories included in this collection are:

What listeners say about More Oddments

Another Audible offering from an author, I'm quite fond of but have neglected somewhat in the past few years. Pronzini has written around 45 mysteries in his San Francisco set, Nameless PI series. It's a series I like and I was bouncing along in 2015/16 at a pace of one a month and got side-tracked at around the dozen mark after reading Nightshades. Don't know why to be honest. Here he showcases his skills in the short story format and there's a few I really liked, a few that were ok, and a few that weren't especially memorable. Top bananas..... Prose Bowl, the finishing piece in the collection is frantic, pacey and tense...... two writers competing under pressure in front of a global audience to pen a novel/novella from scratch, like two boxers going hammer and tongs at each other for twelve rounds ..... word count is critical, penalties exist for repetition and other writerly sins. It shouldn't really work, insofar as it sounds totally preposterous but it does. Opportunity..... two cop partners, one skint and ill and deferring an operation and keeping his condition from his wife and his boss, go after a perp and come back with a corpse and a case full of cash. Opportunity, trust between partners and temptation I liked the ambiguity of the ending. One of those Cases has Nameless on a domestic investigation. An unhappy wife suspects her husband of playing away, Nameless investigates and it's not what she thinks. I liked it without ever being blown away. In the others, we have...... Chip - a gangster, his son and boarding school - ok A Craving for Originality - a hack writer wants to spread his wings - alright I Didn't Do It - a man down on his luck, a cheating couple, a thick wallet, a blow to the head and a confession - irritating Angel of Mercy - a Civil War era abortionist is taken to task - undecided Quicker than the Eye - a kind of locked room mystery with a magician/illusionist, his manager and his assistant - enjoyed Connoisseur - nouveau riche, fine wine, envy and resentment - liked it Smuggler's Island - family secrets in small town community - enjoyed Under the Skin - friendship, bravery and cowardice - thoughtful A Taste of Paradise - a fleeting holiday friendship and some regrets - indifference Fergus O'Hara, Detective - historic Civil War tale, San Francisco, St Patrick's Day, gamblers, Pinkertons, a steamer, a conman, some missing gold - nice twist, but annoying narration with the faux Irish accent Mrs Rakubian - subject ???? - forgettable Like every other collection I've read in the past - a mixed bag. 3 from 5 Read - (listened to) July, 2020 Published - 2001 Page count - 238 (6 hrs 22 mins) Source - Audible purchase Format - Audible

Not a s good as his other collections

Enjoyed his other collections better. Daniel Dorse did a good job narrating. I was given this free review copy audiobook at my request and have voluntarily left this review.