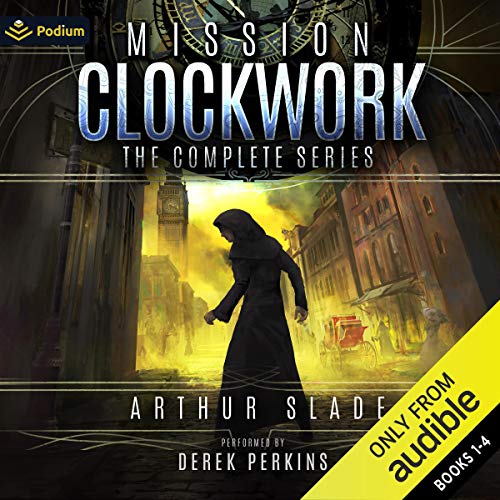 By: Arthur Slade
Narrated by: Derek Perkins
Try for £0.00

He's the greatest spy of the Victorian era, but he's facing his greatest challenge....

Almost since birth, Modo has been rigorously schooled as a secret agent. His master, a British Lord, took advantage of Modo’s unique shape-shifting talents, training him to morph from his unsightly, hunchbacked-self into anyone he liked. He's ready to take on Britain's numerous enemies. But can he survive his new partner, the quick-witted Octavia? And, more importantly, will the two of them be able to defeat the nefarious Clockwork Guild? It will take every ounce of skill, guts, and luck for the pair to succeed.

Includes all four novels: Mission Clockwork, The Dark Deeps, Empire of Ruins, and Island of Doom. In development for the big screen and more than 100,000 copies sold worldwide!

What listeners say about Mission Clockwork: The Complete Series

The books are engaging and interesting with influences from the Hunchback of Notredame and Dr Jekyll and Hyde, and dr Frankenstein and the monster. A little predictable, but nicely written so that they end up being entertaining anyway. I liked the two last books better than the first two.
The narrator isn’t that good at voices..so distinguishing between who is talking is a bit hard if there isn’t some kind of accent being used.
Otherwise a good read.

Ggood for younger audiences. Author does a good job of weaving the stories together. full of action. Reader had a good voice with appropriate inflection.

wonderful performance and a thought-provoking story about our relationships and how the way we look affect them.

so entertaining truly awesome. sad it ended. great reading. well written. wish to get future books in the series.