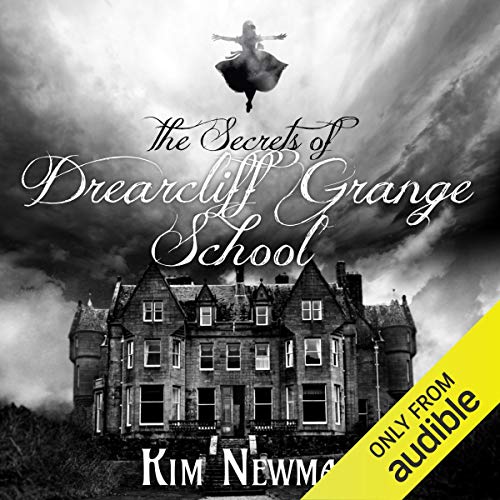 The Secrets of the Drearcliff Grange School

A week after her mother found her sleeping on the ceiling, Amy Thomsett is delivered to her new school, Drearcliff Grange in Somerset. Although it looks like a regular boarding school, Amy learns that Drearcliff girls are special, the daughters of criminal masterminds, outlaw scientists and master magicians.

Several of the pupils also have special gifts like Amy's, and when one of the girls in her dormitory is abducted by a mysterious group in black hoods, Amy forms a secret, superpowered society called the Moth Club to rescue their friend. They soon discover that the Hooded Conspiracy runs through the school, and it is up to the Moth Club to get to the heart of it.

Kim Newman is a well-known and respected author and movie critic. He writes regularly for Empire Magazine and contributes to The Guardian, The Times, Time Out and others. He makes frequent appearances on radio and TV. He has won the Bram Stoker, International Horror Guild, British Fantasy and British Science Fiction Awards and been nominated for the Hugo, World Fantasy, and James Herbert Awards.

What listeners say about The Secrets of the Drearcliff Grange School

I enjoyed this immensely and don't care that technically it's meant to be YA. Amy's alienation at joining a new school late and the casual tortures - physical and psychogical - that girls inflict on each other as she tries to fit in is convincing. She soon discovers that she, like some of the other pupils, is an "unusual" with odd powers that she must explore and master. In this universe unusual powers are acknowledged and, in a few cases, celebrated but there are dark plots afoot.

I do appreciate the gung ho adventurous spirit of the girls of Drearcliff and their distinctly odd teachers. The girls do not hesitate in setting off to rescue a friend held captive by masked criminals, or stop another girl having her face cut off, or launch violent physical attacks on any other rotters including dastardly prefects.

It's not quite as jam-packed full of cultural references as Kim Newman's other books but there's enough to enjoy spotting. Not exactly sure what age it's aimed at but I would have LOVED this book from about 11 onwards.

Joan Walker gets the tone of a 1920s boarding school story just right and sounds as if she's enjoying herself too.

All in all it's tremendous, exciting fun.

I couldn't finish this book. The narrator was so irritating with her awful accents, intonations and speeds, I found it impossible. Half way through I still struggled with the flatness of the characters. The story ambles on, but seems to be pointless and very much overshadowed by the weak characters and dire narration. Nit for me, thanks.

I’ll be honest and say it took me three attempts to get into this which is reason enough for someone not to enjoy it. I really didn’t like the narration at all at first. The for some reason it just ‘clicked’ and now I only wish there were more books I like to read that are narrated by Joan Walker. In a way, her narration almost makes the story spookier which I love.

The story itself was pretty good for the most part. It doesn’t quite get 5 stars from me as it seems to get a little disjointed towards the end but that’s just my personal opinion. I love that the main characters are all female particularly as there are also no relationship lines or typical ‘male viewpoint’ writing of them. The fact they are girls is almost incidental though Kim has still managed to capture the interaction between female school-mates rather well I’d say.

Another corker from Mr Newman

It's brilliant. It's young adult which just means it's not unnecessarily graphic and there are no awkward sex scenes. Ripping story, brilliantly told. More please.

Are you an Unusual?

Would you listen to The Secrets of the Drearcliff Grange School again? Why?

No - though I've thoroughly enjoyed I would likely not need to listen again.

LOVE the narrator's voice and compelling characterizations! Pure magic, as intended for the story.

Which character – as performed by Joan Walker – was your favorite?

I did not single one out. Outstanding distinctions between a multitude of characters. You know the character speaking based on inflection and nuances.

No - I really enjoyed it but no extreme reaction.

Ok, the story is so amazingly detailed it takes keen attention to follow the various characters and their interactions. I see that as a positive, as opposed to some Dickensonian drudgery.

I especially liked the talents of various unusuals. Instead of clubbing the reader over the head with obvious distinctions, talents and peculiarities are malleable and diffuse. Clever structuring for the story which encourages the imagination to wander.

Not the best story, but kept my attention and the narration is completely worth it.