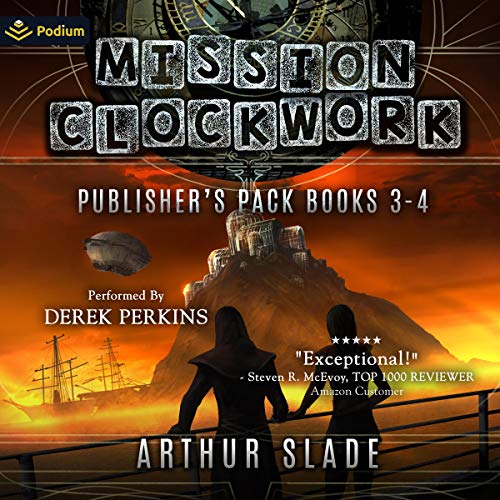 By: Arthur Slade
Narrated by: Derek Perkins
Try for £0.00

Who dares look upon the God Face?

While Modo has spent a quiet winter recovering from his adventure in the dark deeps, talk is swirling around London of ancient Egyptian ruins in the midst of the Australian rainforest. A temple bulges with riches but also contains danger: the infamous God Face. No one knows what the God Face is or what it is made of, but it is rumoured to be a powerful weapon; anyone who looks upon it will be driven mad.

Modo’s next assignment? Go to Queensland in Australia, and discover the truth behind the God Face. He won’t be alone: Octavia and even Mr. Socrates will be accompanying him, as well as Mrs. Finchley, Modo’s beloved caregiver from childhood. But hot on their trail is the Clockwork Guild, with a brand new weapon: mechanical birds with sharpened metal claws and poisoned beaks.

In his greatest adventure, the shape-shifting, masked spy Modo has a much more personal quest: to find his parents before the Clockwork Guild does. There is something in their blood - his blood! - that his enemies want to use to create an unstoppable army. When the Clockwork Guild find Modo's parents first, Octavia and Modo chase them across Europe and North America to the Island of Doom. Joined by memorable characters from the first three books - some lovable, and some terrifying and evil - the two spies dash toward a thrilling conclusion.