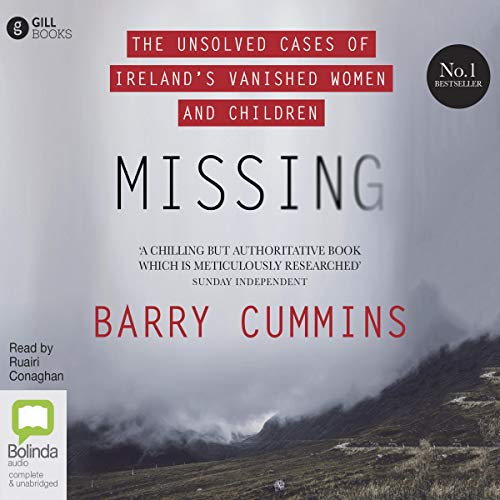 By: Barry Cummins
Narrated by: Ruairi Conaghan
Try for £0.00

From 1950 to the present day, there have been almost 900 long-term missing people in Ireland. The equivalent of a vibrant village, all gone, vanished without a trace.

Where did they go? Are they dead or still alive somewhere? How many have been murdered? How many killers have got away with their crimes?

RTÉ journalist Barry Cummins has reported on the unsolved cases of Ireland’s missing for decades. In this new edition of his best-selling book, he examines the latest leads and developments of Ireland’s most high-profile missing cases, including the women who disappeared under eerily similar circumstances in the 1990s and whose bodies have never been found.

Written with the assistance of the gardaí and the families concerned, Missing is a comprehensive and shocking account of the cases that have in turn fascinated, puzzled and horrified the Irish public. It also examines the possibility that there may be a serial killer out there who has gone to extraordinary lengths to evade justice, leaving open the possibility that they could strike again.

What listeners say about Missing

The narrator's pronunciation of place names was, at times, questionable. Otherwise a well researched book.

Very well researched and added a lot of new information on an already well covered subject. Unfortunately the butchering of the pronunciations of some of the place names mentioned took from the enjoyment of the book...surely this could have been checked before it was finalised....Athy and Chapelizod were two notable ones. Other than this distraction I would wholeheartedly recommend this book

The mispronounced place names were the only detractors from this powerful book. The stories of Irelands missing should be compulsory learning for everyone on this small island.

This is a thoroughly researched and well written book let down by the narrator who failed to carry out basic research into pronunciation of common Irish place names and words, including the name of one of the missing women. How disrespectful to her.

intregging... where are they gone....

loved it.. heart touching type of book, honesty makes me wonder why it happens

I thought the narrator was good. A very thorough insite in how these kinds of horrible crimes play out in real life and society....& how horrendous it is for the families... a lifetime sentence of loss, suffering plus often mystery/confusion (what actually happened?) and feelings of guilt/torture from the "what ifs...?" .

Also, no big surprise it took too long to get a specialised task force together to look into these suspected abductions and murders (mainly) in the 90s. Ireland has a long record of neglect of women's needs, rights, support, protection and safety.

However, I WAS heartened at just how thorough a lot of the searches were and how long cases remained open or active and basically how much certain Gards (police officers) cared. Very interesting that the Garda (police) wanted/asked for more funding, focus, officers and special task forces dealing with these crimes.

Also good to know that modern technology is making it so much harder to commit such terrible crimes. The fact that I was in my 20s in the 1990s left me with a feeling of "and there by the grace of God go I".