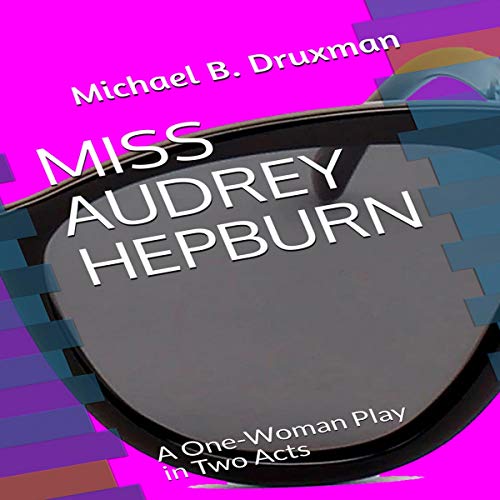 By: Michael B. Druxman
Narrated by: Emma Riches, Simon Gutteridge

Audrey Hepburn was not your usual movie star. She was the highest paid actress of her day, yet she never took a formal acting lesson. A child of war, and the daughter of a Fascist sympathizer, she spent her last years helping children of other wars.

An Academy Award-winner for her first major film role (Roman Holiday), Hepburn continued her storybook career with such classic movies as Sabrina, Funny Face, The Nun's Story, Breakfast at Tiffany's, Charade, My Fair Lady and Wait until Dark. Her two marriages ended in divorce.

Michael B. Druxman’s one-woman play, Miss Audrey Hepburn, is set in 1990. It finds the semi-retired actress in her home in Switzerland, filming a television commercial for UNICEF. It's not going well, and during a break, she ponders her life and the "ghosts" that still haunt her.

Emma Riches' performance as Audrey Hepburn is a really well-observed characterisation. A pleasure to listen to!

A very calming listen, with an insightful look into the iconic life of Audrey Hepburn. The play is beautifully read by Emma Riches, who brings Audrey Hepburn to life so naturally; you feel as though you are sitting in the room with her. An instant connection with the character is formed through Emma’s charm and decorum. Seamless musical transitions and very eloquently read. This play was a pleasure to listen to and I would highly recommend it.

Transported to a calmer time

“The most important thing is to enjoy your life. That’s all that matters”. This was a lovely story that was communicated well. There was a real sense of escapism which I thoroughly enjoyed, especially in these strange times! A joy to listen to.

Emma Riches gives an engaging performance as Audrey Hepburn in a play which gives an overview of her life and work. Charming

This one-woman play is written by Micheal B. Druxman in a way that makes you feel like you’re having an intimate conversation with Audrey Hepburn herself. Emma Riches’ portrayal is a great impersonation of Audrey; clear, enchanting and, along with perfectly apt atmospheric sound effects, faithfully brings her to life.

A brilliantly written insight into one of the greatest icons in theatre and television. Utterly charming and very believable. Emma Riches' fantastically nuanced performance truly brings her to life.

I never knew what an interesting life Audrey Hepburn had and this play by Micheal B. Druxman was such a lovely way to find out some of it! A really enjoyable listen with lots of fascinating tidbits from Audrey's career and life. The performance really brought Audrey to life and was beautifully voiced by Emma Riches - it felt like Audrey was talking just to me! Occassionally there were times when the story felt a little abrupt changing from one anecdote to the next, but overall it really didn't matter as each anecdote was an interesting insight into what made Audrey who she was and the voice performance from Emma was so accurately Audrey that it made up for the few awkward story jumps. Would definitely listen to all over again!

A beautifully performed insight into a lesser-known side of Audrey Hepburn. Interesting content and accurate portrayal.

I enjoyed Emma’s performance in this as she carries us through the years of Audrey’s career and personal life. I felt I learnt a lot about Audrey I didn’t know and it was insightful coming from ‘Audrey’ herself. A calming hour, thank you Emma!