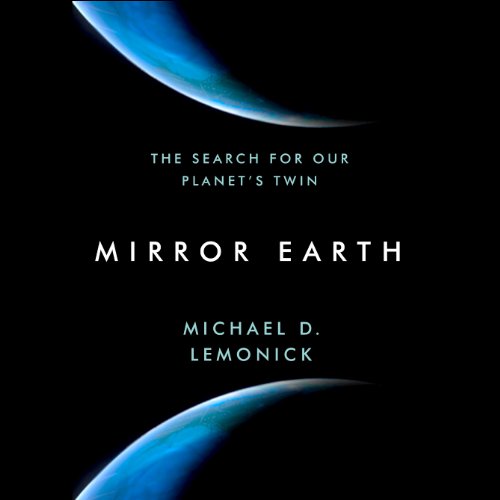 The Search for Our Planet's Twin
By: Michael D. Lemonick
Narrated by: Carol Schneider
Length: 8 hrs and 30 mins
Categories: Science & Engineering, Science
1 out of 5 stars 1.0 (1 rating)

In the mid-1990s, astronomers made history when they detected three planets orbiting stars in the Milky Way. The planets were nothing like Earth, however: They were giant gas balls like Jupiter or Saturn. More than 500 planets have been found since then, yet none of them could support life. Now, armed with more powerful technology, planet hunters are racing to find a true twin of Earth. Science writer Michael Lemonick has unique access to these exoplaneteers, as they call themselves, and Mirror Earth unveils their passionate quest. Geoff Marcy, at the University of California, Berkeley, is the world's most successful planet hunter, having found two of the first three extra-solar planets. Bill Borucki, at the NASA Ames Research Center, struggled for more than a decade to launch the Kepler mission - the only planet finder, human or machine, to beat Marcy's record. David Charbonneau, at Harvard, realized that Earths would be much easier to find if he looked at tiny stars called M-dwarfs rather than stars like the Sun - and that he could use backyard telescopes to find them! Unlike those in other races, the competing scientists actually consult and cooperate with one another. But only one will be the first to find Earth's twin. Mirror Earth is poised narrate this historic event as the discovery is made.

What listeners say about Mirror Earth

if you're actually interested in this subject, stay away from this book. constantly goes off topic, all about name dropping an he said, she said. full of pointless information, she said I liked ham on my sandwich she said, but he said that you never. it's pointless, not scientific at all.

Who would you have cast as narrator instead of Carol Schneider?

If you could play editor, what scene or scenes would you have cut from Mirror Earth?