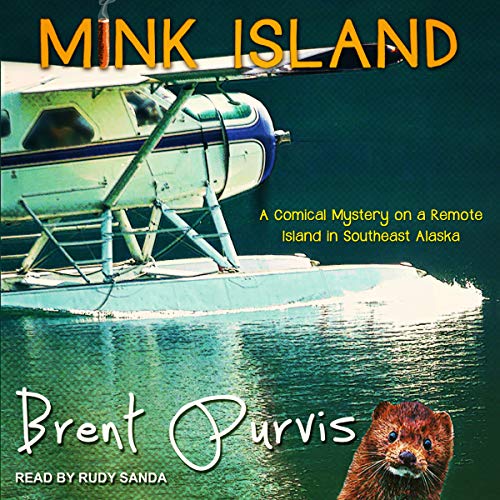 Imagine living on a remote island, only accessible by boat or floatplane. What if you were stuck on that island with a killer at large, surrounded by a horde of outrageously loony inhabitants?

Jim Wekle's first day as a trooper on an island in Alaska could have gone better. It was raining, the coffee was bad, and within hours of stepping off the seaplane, he found a bikini-clad girl floating in a kelp bed.

As Jim investigates who might have put the bullet in her back, he stumbles across a uniquely diverse and extraordinarily hilarious batch of island inhabitants. Puffing on his imported cigars, Jim soon learns that no one on the island is more unique, diverse, or hilarious than his unlikely counterpart: a man simply known as Kram.

What listeners say about Mink Island

People seemed to like this book, so I took a chance and bought it. It sort of meandered, without much purpose, around a murder on an island in Alaska with supposedly colorful and fun locals. Part of the "funny" story was the absolutely hilarious (I'm being sarcastic) tale of a toy poodle being snatched and killed by an eagle. Couldn't stop laughing, especially at the part where the elderly pet owners were made fun of at a memorial service for their dog. The reader was awful: He mispronounced common words (interpretate?), and I just couldn't take his voice any longer. In addition, the author might want to sit in on a fifth-grade grammar class on sentence construction.

This book might have gotten better if I'd been able to listen to it for more than 20 minutes, but I'll never know.. Can I please have my money back?

This book needs an editor

I have to say I liked the story and the characters a lot, and I’ll certainly listen to the other books in the series. That said, I did find the numerous grammatical and syntactical errors distracting. I hope for better as the series progresses.

the NARRATOR lacked personality would be much more interesting with exciting performance to make interesting.

Great first book in a series.

I enjoyed the story. The narrator grew on me after a while. I think the character development was good leaving me wanting more from this set.