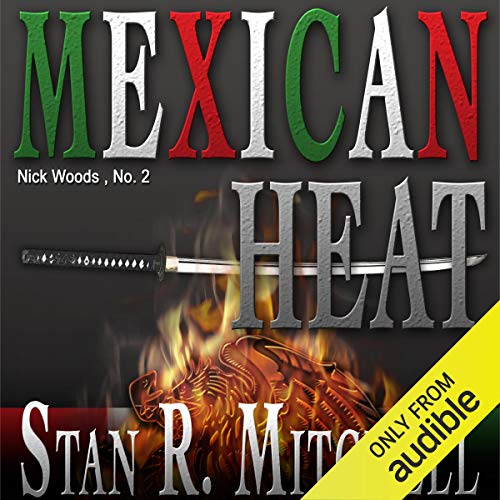 Nick Woods is tired of waiting. America's greatest sniper has spent the better part of two years up in the mountains of Montana, waiting for the government to double-cross him and try to come get him. He has good reason to be wary. The government has betrayed him twice already, but Nick's a hard man to kill. And just waiting in isolation, with his wife Anne gone, and his paranoia at dangerous levels, is killing him, day-by-day. And so Nick ventures out. Carefully, like Nick does everything. But what Nick doesn't know is that the Mexican government stands on the verge of complete collapse.

A brilliant madman has united the drug cartels into a deadly alliance, and the Mexican president holds a perilous grip on power. Now, Mexico's leading businessman - a multi-billionaire who owns much of the country - is about to exit the country, selling off his businesses and taking his capital out of the country. Such a move would lead to an exodus of other businesses and just like that, America would face one of its largest catastrophes in recent times: a third world country on its borders, run by a drug cartel whose reach spans from South America into deep within the United States. America has already sent special forces to deal with this cartel, but that proved a catastrophe. The country needs Nick Woods again, and it needs him now.

What listeners say about Mexican Heat

Would you listen to Mexican Heat again? Why?

Stan R Mitchell is a top author who will thoroughly entertain you and draw you into a detailed world with Mexican Heat!

This story builds upon the last book without making it required reading. You can just as easily dive into this book without reading the first. The pacing is fast. I enjoyed listening to an action movie in my mind.

Mitchell has really found his stride in Mexican Heat. The characters, not just the lead but the ancillary ones as well, are detailed and have enough depth that you are interested in them and can actually see them as real folks.

Mitchell has a skill that I rarely see in modern action fiction. He successfully balances an effectively paced story with enough detail and background that you don't feel spoon fed but also don't feel like you missed a page somewhere.

His development of Nick in this book is superb. I'm hooked and you will be too.

As I've said in a review of book one in this series, if you enjoy Mark Greaney, especially the Gray Man series - you'll LOVE this series. Give it a try!

Nick Woods, but let's not forget our ninja either...

Jay never fails to embrace a story and bring it to life with effective dialog voicing and solid vocal rendering. His involvement in this series is a real coup.

Not that I can reveal here without spoiling the story for others.

BUY THIS BOOK! You will not regret it.

The ending is amazing, you won't believe it but you will love it!

Writing is fantastic, storylines and characters are real life! The series is off to a great start! Looking forward to book number #3! Jay Snyder once again crushes it.

Mexican Heat is the second novel in the Nick Woods series. The first book in the series is Sold Out which is outstanding. In analyzing what I liked less about Mexican Heat there are two factors: 1. The situation is simply not credible. 2. While most action thrillers have a lot of testosterone, Mexican Heat is excessive. The third novel in the series, Afghan Storm, gets better reviews so I may give it a try. Stan R Mitchell has real potential as an action thriller writer, but he needs to try to avoid the excesses of Mexican Heat.

I cannot recommend this book.

Enjoyed the adventure. Nick didn't disappoint . Looking forward to the next book in series,

Typical good mercenaries vs bad mercenaries. A little passion, and everyone has a sad relationship story, but our hero manages to get lucky, in between all the blood letting, gore planning, and machismo.
The story moves right on along, the reader does a great job with annunciation all the way through the story. Not a great read but good for an over night story that has some interesting moments and it is delivered well

Story is weak and full of plot holes

This story lacked a lot. It seems to skip important details but repeat other, less important details. I listen to a lot of books in this genre and didn't like this one. Not sure if I'll finish the series or not.

First book better but this shifts Woods to an awkward leader. I like the personal mission better. Still a good revenge thrilling ending.

Not much story here. Not helped by characters who are a thin representation of every action genre cast - lone man with integrity, government agents with no integrity, beautiful woman who can shoot, really bad drug lords, really bad politicians. Really good guys win. Lots of stuff with guns and explosions in between. That's it.

I listened to the first book in this series and thought it was pretty good. This book was a huge huge disappointment. This book is not a page turner, isn’t really about Nick Woods, and is not filled with lots of good guy action scenes (heck in the whole book there are only 2 ops for SSS). This book is dominated by stories about ‘the Butcher’ and is full of graphic barbaric action. I totally enjoy many series in the genera (Reacher, Rapp, Kyle Swanson, Pike Logan, John Rein, and Quin) but this book is way off course with so many graphic detailed barbaric scenes. One scene would be enough to get the point across or less detail and hint at how brutal the cartel and the Butcher are but this novel is dominated with the villain’s action and very little action by the good guys. I forced myself to keep listening and kept waiting to hear SSS go on the offensive and take it to them - to be the heroes but the scenes never came. Nick only stepped up at the end - briefly. I rarely out right don't recommend a book but in this case - I do not recommend this book.

Great performance by Jay Snyder. I love the story line. For all Mark Greaney fans, you will very much appreciate Stan’s story.