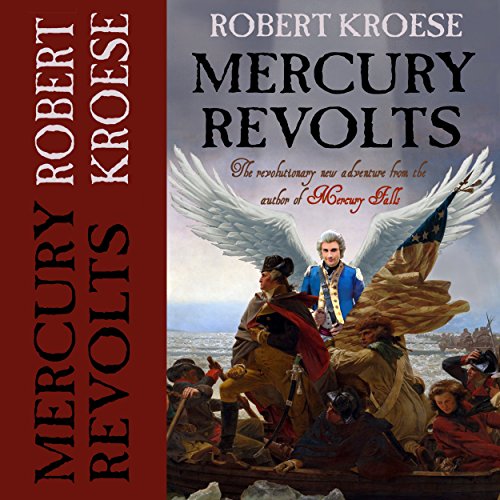 By: Robert Kroese
Narrated by: Joel Bezaire
Try for £0.00

After a lowly software tester named Suzy Cilbrith uncovers evidence of a vast government conspiracy, she turns to a fringe reporter named Eddie Pratt for help. Far from dismissing her wild claims, Eddie reveals that things are even worse than they appear: the US government has been infiltrated by angels, who are attempting to bring about Heaven on Earth - no matter the cost.

Only one angel knows the secret to exposing the cabal: the rogue cherub known as Mercury. But when Mercury learns who is behind the cabal, he realizes he's going to need a lot of help. Old enemies become allies, old friends become bitter enemies, and as competing plots for world domination unfold, it isn't always clear which is which.

What listeners say about Mercury Revolts

What did you love best about Mercury Revolts?

The plot, quirky sense of humor and utterly entertaining characters made this a great listen.

Would you be willing to try another one of Joel Bezaire’s performances?

Absolutely not. Mr. Bezaire had best look up how to pronounce words before he attempts to narrate again. Within the first 30 minutes, I heard at least 4 mispronunciations, which pulled me out of the story and snapped me back to reality. This continued throughout the story, reminding me to write this review each time.

Also truly annoying was the poor production. There were distractingly long gaps between chapters that, invariably, made me check to ensure my phone hadn't paused. Additionally, sometimes in those long pauses, I could hear the narrator sigh (in which case I didn't have to check if my phone was paused at least). Someone scrimped on production and narration in this audiobook.

is the narrator chewing gum?

this is too painful to complete, the narrator has something in his mouth, i wish they wiuld have kept the narrator,from the first 3 books, the voices are painful as well here.

Such a fantastic series!

Such a fantastic series and the narrator was great! The main character, Mercury, is a thrill to follow and I am very eager to start Mercury Shrugs!

First of all, I hate it when a perfectly good narrator isnused for three cinsecutive books, and is yhen replaced by a narrator who seems to be working overtime to try and compemsate.

Worse though is tbe fact that there are obviiusly huge chunks of data missing from the overarchimg storyline. “ Mercury Rests” seems to be missing from the Audible offerings and there mustve been a ton of info we series readers missed out on. Where is Christine? What made Michael/ Michelle turn from good to bad? And all kinds of other plot points seem to be drastically different- but loyal Audible liateners are missing out. I just dont get this? Why make MOST of a series while leaving it incomplete?

While Robert Kroese’s stories are always entertaining, the narrator himself does only a fair job; however, the editing is horrible. You can hear the narrator taking breaks, etc and several words are not pronounced correctly... sigil for example. For the record, it is pronounced si-jul or si-gel, not si-gull. The reader’s pacing is even off. These issues are more to do with the editor than either the writer or reader. Should have stuck with Brilliance rather than whoever published this one.

The narrator, there are times when he's not bad, but there are also times when I skipped whole chapters because I didn't want to hear the way he voiced certain characters.

Who would you have cast as narrator instead of Joel Bezaire?

Kevin Stillwell would be my first choice. Roger Wayne or Nick Podehl would also be good.

Wish there was more then the same old sitcom style story. It has potential but is t completely there.