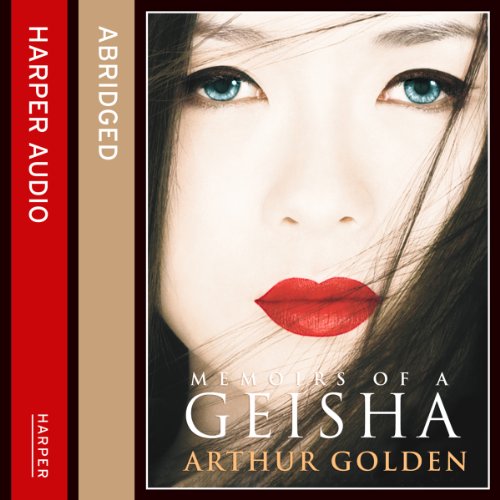 Memoirs of a Geisha

By: Arthur Golden
Narrated by: Noriko Aida
Try for £0.00

In Arthur Golden's poised and beautifully written debut novel, Sayuri tells the extraordinary tale of her life, evoking a quarter of a century of Japan's dramatic history, 1929 through to the post-war years.

Her story encompasses her childhood in a poor fishing village, before taking us, as she was taken at the tender age of nine, into the formal but intimate world of the geisha, a world supposedly of eroticism and enchantment, but also one of exploitation and degradation. Later, when the war has forced the closure of the geisha houses, Sayuri tells of her redemptive struggle, penniless and hungry, finally to forge her own freedom, on her own terms.

What listeners say about Memoirs of a Geisha

half of the book is missing!

This book is my all time favourite. I've read it so many times that I've had 3 copies of it. I thought it would make a nice change to listen to the story at night whilst going to sleep but I'm very disappointed. So much of the book has been cut. Not good at all.

Noriko Aida tells the story beautifully but the story has been chopped until there is virtually nothing left.

Memoirs of a Geisha

A tear-jerking, funny account of an innocent young girl whose life is turned upside-down when her poor fisherman father is unable to cope with having two young girls and a dying wife and sells her to be a Geisha Girl. This story is fascinating and shows what a hard life these poor girls had after the betrayal of their father. One sold as a prostitute and the other a Geisha. Well worth the read/listen. I have now also bought the book to read!

I've read this book over and over again and was excited to listen to it, but almost all the story is cut out and is abridged in a terrible way, so disappointed, how could you make such a wonderful book last just under 3 hours?
Butchered, which is a shame because the narrator tells the story in a beautiful way :(

Beautifully written, and as its performed by a japanese person only made it feel that much more real. Although its a wonderful story, it is still sad to hear the inaccuracy that geisha sell their bodies, this is not true at all! I highly recommend everybody read 'Geisha of Gion' by Mineko Iwasaki. She was the most famous geisha in Japan and was interviewed by the author of Momoirs of a Geisha (although, their conversation was to remain completely anonymous). This book is basically an exaggerated telling of Mineko's life, I highly recommend gettingher book and truly leaning about the life of a geisha and the incredibly life she lived!

This was my first audio book so I have little to compare it to however I enjoyed it so much that I have upgraded my shuffle to a Nano so that I can listen to lots more!

The narrator's accent added to the realism of the story that moved along at a slow pace, allowing you to take in each stage of the main characters life. The attention to detail transports you into another world from which you view the life of a little girl as she is torn away from her family and taken to a city far from home. Here she slowly developes into one of the most important Geisha of her time. You are given an insight into her sense of duty, her hardship, her anguish, her survival and ultimately her feeling of self-worth that finally leads her to love and happiness.

This is far from a love story but is a factual dialogue about Japanese life in former times.

Try it - you won't be disappointed.

Note that this is abridged

Having read the full book some years ago, I found that this abridged version cut out quite a significant part of the story. I would certainly recommend the full version.

What a disappointment, this recording loses everything that is magical about the book. Even the film which is half the length of the audio book captures the essence of the story more than the audio book. Audio books should be exactly the same as the written book, no one is asking for an abridgement version. We don’t listen to audio books to get through a book in a shorter time but enjoy the actual book in a different way. This is my favourite book but the audio version is terrible.

Gives you hope that maybe, wishes and dreams can be made real and miracles given

I didn't realise this book was shortened until reading the reviews, but did have my suspicions given the relationships seem to lack detail and depth and things like the war, or everyday geisha activities seem glossed over. It did give me a taster though and I'd like to read the full book, and the narrator is lovely...might just watch the film.