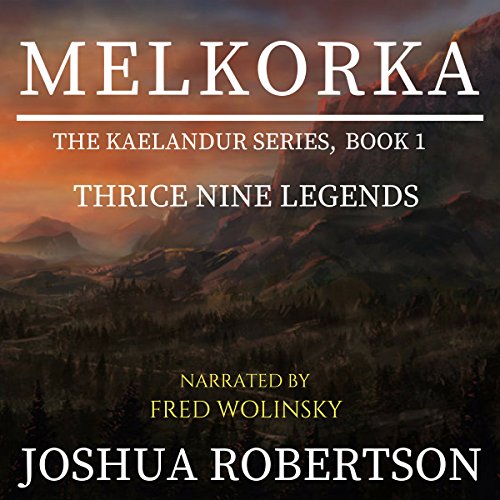 Branimir is a slave to the mighty Highborn. Unwittingly, his masters forge a copper dagger capable of destroying the Ash Tree. Drawn along on the quest to remedy the mistake of his masters, Branimir becomes the most unlikely of heroes in an inimical world of magic and mayhem.

What listeners say about Melkorka

I did enjoyed it quite a lot. The story itself was interesting even thought some things were not explained but maybe they are in second part. Narration was really good with plenty of different intonations. Characters were interesting and had their own differences. It was easy to get involved with some of them and feel emotuon when something happens to them. Would recommend it.

I enjoyed the story, the author's style never disappoints, but I just could not handle the narration. I may just read the novel to get a better appreciation for it.

This is an interesting and complex epic fantasy but DARK and violent in a largely pre-bronze age world where multiple cognizant species vie for supremacy and religious fervor plus magic threaten them all. I had the joy of listening [AUDIO] to wonderfully differentiated characters as they developed in this saga start. Being the first, this book stands alone and ends in a logical place, completing the current chapter. Of course if you want to find out what happens next . . .

This book was an interesting one. The pace is very slow, especially at the beginning. There are a lot of characters to start it off, and it's hard following who is who, especially being the style of dark fantasy that it is, where a lot of those characters don't survive. Though, the audio makes it a bit easier to follow than the eBook. By the end, I believe two of the original cast of I have no idea of how many, actually survive. The plot is thick, but hard to follow until near the end of the book when the pace picks up drastically. The kras are a fun species, and I wish to know more about them. The cost of magic is very interesting, each time magic is used, the user ages. Therefore, becoming an old man even if they're only in their twenties, simply because they used too much magic. It was a decent read, but I believe a little too dark, by that I mean, the people who die, you're only up to lukewarm in liking them. I believe it would do much better to know them better, make the reader more invested, so their death has a darker tone and more emotional for the reader, like how Game of Thrones does it. With so many deaths happening, you as the reader, decide to not invest deep in any of the characters, because you don't know how long they'll last.

The narration is a bit annoying to me. I've listened to hundreds of audiobooks, many hundreds. Two parts of the narration bother me a bit, one, is the narrator starts the sentence strong and then slows down on the last few words of each sentence, which when this is done for every sentence, it becomes frustrating. Also, the Kras' voice is way too high pitched. It's squeaky, and therefore annoying. I understand the change of voice for such a small character, and his voice being a much lighter tone than the others, but it was overdone. When I changed the narration from &quot;normal&quot; to &quot;fast&quot; on my device, it helped. The story is good, the narration isn't as good as it could be. Overall, I enjoyed the book.

Very engaging and full of surprises.

Reader Review:
Fred Wolinsky isn't exactly my cup of tea when it comes to Narrator voices.

The Good:
Wolinsky was able to give each character a different and identifying voice which made dialogue easy to follow throughout the story.

Though it took some chapters for me to get use to his voice and the way he narrated, it did end up growing on me.

The Bad:
It took a few chapters for me to get adjusted to his voice. Though a lot of the characters voices I felt were matched to the characters perfectly, there were some that were off.

I wish he had more emotion in the dialogue during intense scenes. Also, durning action narration, I wish he amped up more as well.

Over all the Narration gets 3 of 5 stars.

The Story:
It was an excellent story through and through and because of it, I stayed interested enough to get use to the narrator.

The Good:
I thoroughly enjoyed the main POV character, his struggles, his thoughts, his growth, and his adventure.

There were some very dark and surprising twists in both the 2nd and 3rd acts of the book that grabbed my attention and by the end it left me wanting more.

The Bad:
A bit heavy on metaphors.

Story gets a 5 out of 5 rating
Overall it gets a 4 out of 5.
I would buy the audible version of book two with the same narrator if Available so I can listen to it as I work. (I am a driver.)

Melkorka: The Kaelandur Series, Volume 1, my third read/listen from author Joshua Robertson. Well-written & enjoyable fantasy. Fred Wolinsky’s quirky voices & narration made the 9-hour 39-minute tale pass quickly, although the book seemed longer due to the detail written into it. I look forward to Dyndaer The Kaelandur Series, Book 2). I was given an Audible copy of this book & am voluntarily reviewing it. (RIP Marley January 20, 2014 - July 24, 2018).

Melkorko by Joshua Robertson and narrated by Fred Wolinsky is an audible book that was given to me and the review is voluntary. This is an adventure in a strange and intriguing world where there are Highborn (magic users) and creatures like look little read demons called grias. I hope I spelt that right. The story is from one of them, his point of view. All grias are slaves. Plenty of fantasy adventure here but I really didn't LIKE anyone. I sort of liked the main character but not a whole lot.
The narration was fairly good but when he did the grias voice it was a bit annoying.

Joshua Robertson write and creates an amazing world! It is written from the point of view of Branimir. He takes a while to grow and begin to shape to become a terrific character! The writing brings everything to life! It is a world that will remain with me for a long time! I can't wait to read the next two books! Fred Wolinsky, the narrator, does a fantastic job of bringing this world to life!

The story just draws you in

an unlikely warrior, a world in peril, and riddles at every turn keeps your attention to where you have to find pitt what's next and just what does that old man mean by what he said.