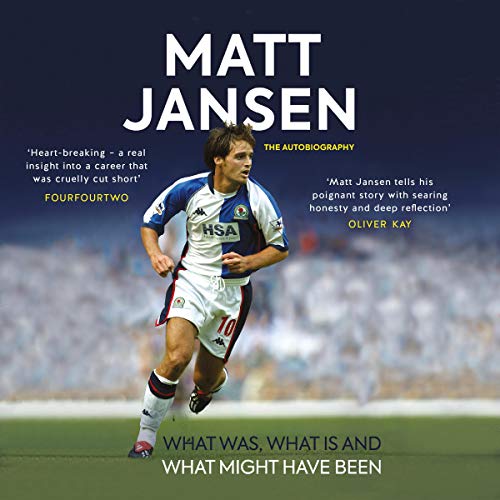 By: Matt Jansen,Jon Colman
Narrated by: Matthew Hall
Try for £0.00

What do you do when the world is at your feet...and then suddenly it isn’t?

Matt Jansen had it all. He was young, quick, audaciously skillful and, at the turn of the millennium, regarded as one of the most intelligent attacking talents in English football. His potential seemed boundless.

After bursting onto the scene with Carlisle United in 1997, Sir Alex Ferguson tried to lure him to Manchester United, but foreseeing only a bench spot at Old Trafford, Jansen instead opted for Steve Coppell’s Crystal Palace.

In 1999, he moved to Blackburn Rovers, and after blasting them back to the Premier League in 2001 and scoring in the 2002 League Cup final victory over Spurs, he was widely tipped to be part of England’s 2002 World Cup squad - but coach Sven-Goran Eriksson had a last-minute change of heart and instead selected Martin Keown.

While England battled it out in the Far East, Jansen took a holiday to Rome. He and his girlfriend were on a moped when they were hit by a taxi. Matt suffered a brain hemorrhage and slipped into a coma for six days.

He survived and, astonishingly, he was back playing for Blackburn just four months later. But while his body may have recovered, his mind had not. In the shadow of the accident, he was unable to recapture the instinctive genius or the bullet-proof self-confidence that had previously defined him.

This was a hidden breakdown - nothing that could be picked up by a fitness test or fixed on an operating table. As Jansen’s career as an elite footballer slipped away from him, he started to discover more about what had happened to him and how he could recover not only as an athlete, but as a person.

With insights from a range of contributors, including Graeme Souness, Sir Alex Ferguson, Sam Allardyce, Sven-Goran Eriksson, Lucy Jansen, and Professor Steve Peters, this is the astonishing story of a career destined for the stratosphere, cruelly snatched away by the vagaries of fate.

What listeners say about Matt Jansen: The Autobiography

An interesting tale for those with any interest of football. You don’t need to be a huge follower of Matt or his playing clubs to find this a fascinating book.

A totally honest and poignant story of Matt’s life . Most sports autobiographies are embellished and ego driven . This isn’t one of those . Best sports book I have listened to . Truly inspirational. I don’t use those words lightly .

Even though a huge football not much into footballers autobiographies, matt s is a must read / listen to account of what could or might have been

The book was an interesting read.
As the book progressed, the theme was very much how he would have, could have and should have, but was mentally stopped. I was wanting a bit more from his time at the clubs, but he was clearly detached from it after the accident and the focus was on mental health rather than the football.
Id recommend reading it and i enjoyed it. Fair play for giving such an honest and moving account of your life in football.