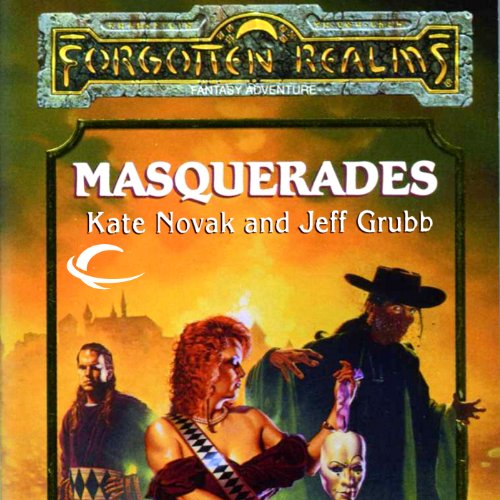 By: Kate Novak,Jeff Grubb
Narrated by: Marty Moran
Try for £0.00

When her hometown is overtaken by the Night Masks crime syndicate, Alias joins forces with the saurial paladin Dragonbait and the halfling bard Olive Ruskettle in a quest to free the town merchants from their underground overlords.

What listeners say about Masquerades

please take out redos and errors.

narrators errors and redos not taken out of the media. chapter 2 most prevalent for this. good story othereise.

Some chapters have not been edited properly but OK if you can get past that.

Would you try another book from Kate Novak and Jeff Grubb and/or Marty Moran?

Yes, for Grubb and Novak, Maybe for Moran.

Would you be willing to try another one of Marty Moran’s performances?

Maybe, but only for a good story. He coughs and repeats himself suddenly in the middle of part 1. Very poor quality control. I wish they had used Kristin Kalbli, who read Grubb & Novak's Finder's Stone trilogy - she does a much better job then he does and is great as Alias (which she pronounces properly). He isn't horrific, just sub-par for this book. And the editing was poor.

I am so disappointed in this narrator

I liked the story. I hated the narration. It is disappointing that they've allowed this narration to stand.

The story itself is a good addition to the Forgotten Realms books, and continues with characters from Azure Bonds and the rest of that trilogy. Buy the book or ebook instead. Pay a middle school student to read it if you need an audio version, and you'll be better off.

What other book might you compare Masquerades to and why?

There is an earlier trilogy by Kate Novak and Jeff Grub starting with Azure Bonds about these same characters, which should give a strong indication about whether you would enjoy this story.... though it has a better narrator.

I would think twice about buying any book narrated by Marty Moran. The earlier books about Alias by Kate Novak and Jeff Grub had a different, far better, narrator. This book's performance is clearly completely unedited, filled with throat clearing, coughing, stuttering, and missed words. He changes his pronunciations of names frequently. Early in the book, there is one sentence in which the switch to past tense trips him up so thoroughly, that he restarts the sentence four times trying to complete it. In others, he clearly hasn't read the sentence through before, and is surprised by a conjunction, the ending of the sentence, or misreads the genders of the pronouns and starts over again when he gets to part of the sentence which makes it obvious he has mistaken which character is addressed. Obviously nobody listened to this before its release, and even the narrator didn't care enough to be sure they deleted the repeated sentences. Even aside from any skill in narrating, it is just complete lack of attention which would allow stuttering through sentences three or four times to be release without even trimming that part of the recording. I have never heard a worse book narration.

Was Masquerades worth the listening time?

Masquerades is worth listening to only if you have no time to read it yourself.

Make this book one you read instead. It's a good book, but a horrible audio recording.

NOT a bad read

Maybe they’ve gone back and done some editing, but I only noticed 1 or 2 spots in the entire performance that were not fluid. I wish the producers would have informed the narrator of certain names’ pronunciations or the gender of a particular minor character from another novel, but without that important direction, I don’t fault the narrator. Worst thing is that I was so worried about how bad it was supposed to be that I didn’t let myself just listen right away.

Starting in chapter 2, there was no editing to the narration. The narrator kept clearing his throat and kept stoping and repeating because he didn’t use the right inflection the first time. Just overall disappointing.

The narrator is so terrible that it makes it too difficult to listen to the story. He mispronounces the name of the main character and there even instances where he stops reading to clear his throat or wet his lips before repeating what he read beforehand and then continuing on. This audio book does not do justice to the beloved characters of Alias, Dragonbait, and Olive Rustkettle mainly because of the narrator.

Bad editing completely ruins a couple of chapters. I also like the narrator less than the preceding trilogy, although he is not horrible, it's just distracting when they switch narrators for characters you have come to love. The story is not bad, but lacks the flair of the Azure Bonds trilogy.

What made the experience of listening to Masquerades the most enjoyable?

I really loved the story and characters! This was a great book (having read the hard copy) and was excited to be able to listen to it during my drive to and from work.

editing was a mess. coughing and clearing his throat plus he repeated sentences like he was practicing. He apparently didnt even take time to listen to the other books with these characters to get in idea for consistency in pronouncing the names. Instead of Alias he calls her "Al-ius" etc...

The production company should pull this book and clean it up before selling any additional units.

something unexpected this way comes

Would you try another book from Kate Novak and Jeff Grubb and/or Marty Moran?

The characters in this novel are well established after multiple prior story lines. Your impressions will remain unaltered. Dragonbait is as endearing as ever. Alias is, well, Alias. It helps to recall that for all the skills she has, she was born, ahem, yesterday.

What was one of the most memorable moments of Masquerades?

The betrayal is one of the most memorable moments in Masquerades and it brings a needed edge to the tale.

Overall the narrator had fine delivery. Beware. The production of one chapter is completely unedited. You hear the narrator coughing, clearing his throat, and rereading sentences to change inflection.

This is a great follow up to Azure Bonds. If you loved the characters in that book, this is a great book to listen to. I find it hilarious that the producers forgot to edit chapter 2 and you can hear the narrator do multiple takes and fumble words lol... so great