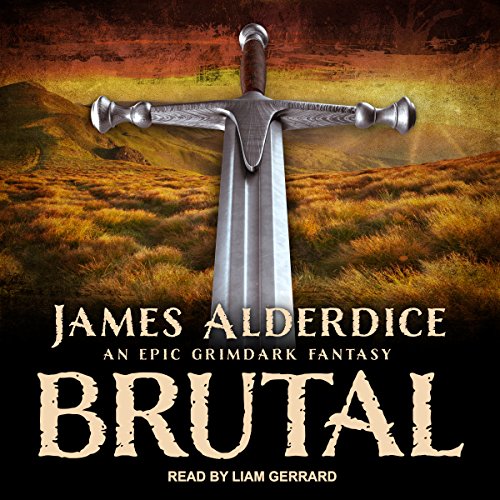 He has no name. His past is a mystery. His future is etched in blood....

The Sellsword knows an opportunity when he sees one. When he rides into the border city of Aldreth, he can tell that the power struggle between two feuding wizards needs a solitary spark to ignite into all-out-war.

As he sets the corrupt paladins and demonic adepts against each other, he's not surprised when the blood begins to flow....

But after the alluring duchess catches his eye, the Sellsword puts himself in harm's way to protect her and the innocent people of Aldreth. To save the noble few, spells and blades won't stop the Sellsword from leaving a swath of righteous carnage in his wake....

What listeners say about Brutal

A Fistful of Brutal

Maybe it’s Tolkien’s popularity that is to blame. All the cookie cutter stories of elves and orcs, and wizards with goofy hats. Or maybe it’s all those damn multi-novel epics that require twenty-plus years of an author’s life to complete. Or it could just be the genre’s tendency towards “it happened because f--- you it’s magic, that’s why!” plots. Whatever the reason, the point is: I avoid fantasy like the plague. And that’s precisely why I was interested in reading James Alderdice’s Brutal. At its heart, the premise of Brutal can be summed up in one sentence: One day a lone mercenary wanders into the wrong frontier town. It could be Deadwood. It could be Tombstone. But this is the age of high-adventure, a time of sword & sorcery and men of legend. So the place is Aldreth—a mining town so infamous it’s come to be known as simply, “All Death.” And our hero, a sellsword, is the Man with No Name. And as the blurb on the back of the books says, this “Sellsword knows an opportunity when he sees one.” Supposedly, Robert E. Howard once said his epic-tales of Conan were related to him by the barbarian himself. That one night alone at his typewriter, Howard felt the shadow of Conan standing over his shoulder with a large axe, commanding Howard to, “Just stay there and write, and if you don’t do exactly what I’m gonna tell you, I’m gonna cleave you down the middle.” While reading Brutal I got the distinct impression Robert E. Howard was standing over the shoulder of author James Alderdice with an axe…or possibly a six-gun. One part Conan, one part Clint Eastwood (or possibly Toshiro Mifune); Alderdice’s Sellsword is the archetypal gunfighter set within the trappings of pulp adventure. Now THIS is a breed of fantasy I can get behind! Here there are no multi-chapter arcs about high-council meeting or hobbits walking from place-to-place. No flowery language aping Middle English myths. No ancient prophecies awaiting to be fulfilled. Hell no! This is a story about a man, his sword, and him getting s--- done. The writing is punchy. The pacing is fast. And we don’t need a stinkin' appendix and map to understand the story. Even better is the collection of oddballs, outlaws, and scheming hucksters our hero must deal with. In short, Brutal is everything fantasy is lacking today. Possibly has been lacking for the last thirty or so years. My only real criticism of the book is how closely it mimicks the narrative of Akira Kurosawa’s samurai-classic, Yojimbo (or Sergio Leone’s homage Fistful of Dollars). If anything, Brutal reads as homage to both films—which it probably is. That is not a bad thing. That said, my own familiarly with Kurosawa and Leone’s work meant I was all-too-aware of what would happen next at several points in the story. Then again, that’s typical of any homage. Not to worry, though. By the end the narrative completely abandons Yojimbo plot and veers in an absolutely unexpected direction.

You know the old Western movie trope of the man with no name riding into a border town with two gangs feuding over control of the city, and going out and cleaning house? Well, James Alderdice takes that old trope of many a Clint Eastwood movie, places it in a medieval type setting, then proceeds to turn the whole thing on it's head and make it his own! This leads to the creation of a unique, brutal, dark and at times humorous story with an interesting collection of characters.

The book starts out with the man who becomes known as Sellsword attacked by bandits on the way to the small city of Aldrith. He dispatches them like the boss he is, although his horse falls off a cliff during the fight. Shame, it was a good horse. He then travels on foot towards Aldrith, and discovers the city, although it has a Duke, power is actually split between two warring wizards. There is also a group of dark cultists in the mix, as well as a dark version of the kingdom's religion stirring the volatile mixture of power politics.

Arriving at the Duke's manor, Sellsword finds the Duke gone, but does meet the Duchess. Receiving a note, the Duchess leaves suddenly. It turns out The Duke was murdered, setting off a chain event of actions as people, including the Duchess, scramble for power. Sellsword starts to approach each party offering his services. This leads to some epic fights, as Sellsword goes and proves his worth to the various parties. The best, and both most hilarious and gory, example of this is when he goes to the local casino run by one of the wizards and asks to see the wizard. when told no, he tells the guards to disarm themselves or he will. all six of them then rush him, where he proceeds to disarm them by removing all their arms! This type of dark humor runs throughout the book. He also runs into the town Paladins, basically the constabulary, who are corrupt and work for the highest bidder, and has several run ins with them.

This is the mix the Sellsword has to deal with, as alliances shift, plots are hatched and tensions boil to the breaking point as each side jockeys for the ultimate power in the town, with an unseen menace over it all providing even worse danger. With some epic city battles, betrayals on all sides and shocking revelations, the plot rushes forward headlong into the final confrontation that will determine the fate of the city!

This book has everything I look for in a fantasy book. Its dark tonally, with just enough humor to keep it from becoming brooding. The setting is well drawn out, reminding me of classic hives of villainy and scum like Lankhmar and Sanctuary without being a knockoff of them. You really get a feel for the city, feeling as though you are right there on the streets. The characters are all very well written, from the mysterious Sellsword to the Duchess through all the other supporting characters. The villains, of which there are several, are some of the best I can remember in recent memory for a small scale story that isn't world shaking. The reasons behind their actions are reasonable in their own minds, and actually make some of them even a bit sympathetic. Sellsword, though, is the star of the show. He is a mystery, but you can piece together the mystery of his identity with the clues you're left. He is definitely one of my favorite characters in recent memory.

I had never heard Liam Gerrard narrate before, but I was extremely happy to discover him. He has an excellent range, and he really brings the various characters to life. He uses a variety of tones and accents to differentiate the characters, and he has excellent pacing on the narration parts. I am definitely keeping an eye out for his work in the future.

Overall, this is one of the top stories I've read in the last couple years. I would rank it up with Nicholas Eames's Kings of the Wyld, Ed. McDonald's Blackwing and CT Phipps Wraith Knight as my favorite reads of the last year. Definitely a recommended read!

I loved this book and would highly recommend it! It keeps you engaged the whole time, so it’s difficult to pull away from it. I vote for a Brutal 2 to come out! :-)

I wanted to imagine this powerful intimidating killing machine but instead I got nameless village boy #3.

It’s not my usual genre, but I enjoyed the characters. It was an interesting mix of fighting and philosophy. This book is definitely for Conan fans.