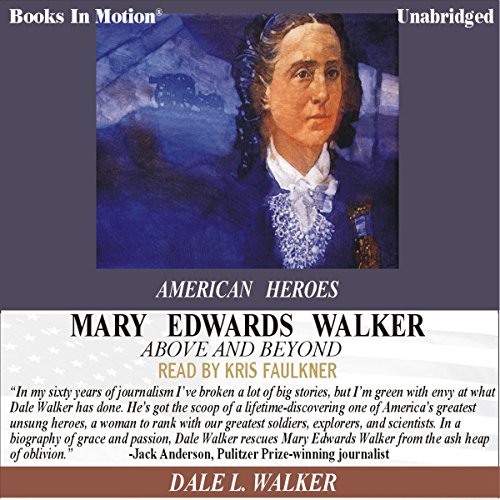 Mary Edwards Walker (1832-1919) defied the conventions of her era. Born and raised on a farm in Oswego, New York, Walker became one of a handful of female physicians in the nation - as well as a passionate believer in the rights of women. She campaigned for women's suffrage and against traditional male-dominated marriage vows, and any issue involving the sublimation of her sex. From the outset of the Civil War, Walker volunteered her services as a physician. Despite almost universal opposition from army commanders and field surgeons, Walker served in the many bloody theaters of the war. She was captured by Confederates near Chattanooga in 1864 and served four months in a Southern prison hell-hole, where she tended the prisoners of war. In 1865 she became the only woman in American history to receive the nation's highest award for military valor, the Medal of Honor.
©2005 Dale L Walker (P)2006 Books in Motion

"A thorough overview of one of history's most enigmatic heroines." (Publishers Weekly)
"Kris Faulkner keeps an even pace and varies her accent and voice enough to keep the biography moving and interesting." (AudioFile)

Biography of an unusual and fascinating American woman who was a medical doctor during the American Civil War--the only recipient of the Medal of Honor. Turned away at every try, she volunteered and persisted to become a war surgeon and was thwarted by male MDs who did want a woman in that role. There is little written that survives on her, she did not write a diary for instance, so was the author factual? From the author's conclusions, I learned a lot about 19th century USA while listening to this audiobook.