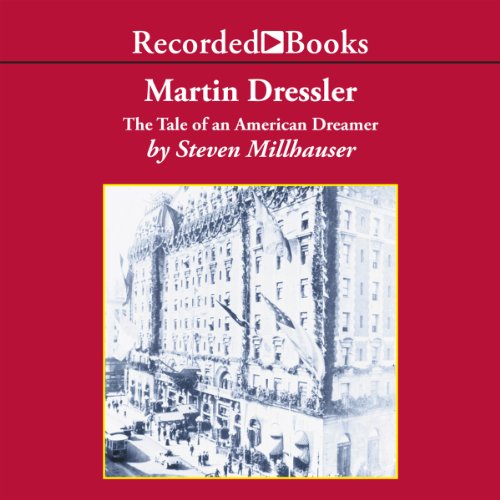 By: Steven Millhauser
Narrated by: George Guidall
Try for £0.00

The American Dream is a theme so compelling it resonates throughout our culture. In Martin Dressler, Steven Millhauser creates a young man who, in dedicating his life to it, becomes a symbol of that dream. Powerful, lyrical, finely crafted, this best-selling book won the Pulitzer Prize, was a National Book Award finalist, and was a New York Times Notable Book of the Year.

Martin Dressler, son of an immigrant cigar maker, believes he can achieve anything if he works hard enough. At the turn of the century, he rises from the shadows of his father’s shop in New York City to become a powerful entrepreneur and builder of hotels. But, as he contemplates this land of almost limitless opportunity, his plans grow impossibly grand. Through the curve of Martin’s spectacular rise and eventual downfall in the business world, his tale remains a uniquely American one. Martin may not always control an empire, but he will always be able to dream.

What listeners say about Martin Dressler

It Builds a Great Foundation

What does George Guidall bring to the story that you wouldn’t experience if you just read the book?

He's one of the greats.

You should go into this knowing that it's a period piece. Millhouser is pushing against the Naturalistic strain of the literature of a century ago, and he infuses it with a sense of the fantastic. Martin's ambitions as a builder -- and his successes -- give this a haunting beauty, and there are absolutely parts of it to savor.

Just as Martin loses interest in his own creations, however, Millhouser seems to sour on his own novel. I recognize that's part of the beauty in the conception -- this America invites us to dream things larger than the world can accommodate, and it's high art to gauge the course of our best such dreamers -- but it's nevertheless disappointing to find as little retrospective insight as we do.

This is the world's okay-est book. It's not bad, it's well written, the prose is clear and concise, and the narrator does a superb job. I would also say the description of the turn of the century New York is also fun. However, there isn't much conflict in the story. Martin Dressler seems to coast through life having every dream and desire fulfilled, and he wants the whole world.
The final chapter almost makes the whole book worth it, almost.

I have to ask myself, if I could trade back the time spent listening to this novel in turn for the memory of it, I dont know if I would. I feel indifferent about it.

That said, Steven Millhouser is a fantastic short story writer, and I would direct anyone who want to read him there instead of here, sadly.

a great story of American Enterprise