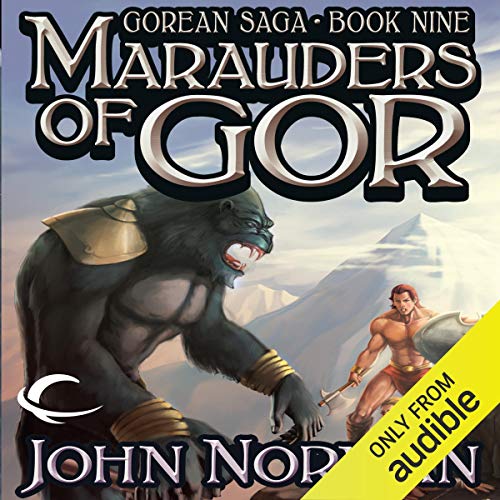 Former earthman Tarl Cabot has been struggling to free himself from the cruel control of the Priest-Kings of Gor to no avail. As he pits his strength against such a formidable enemy, a terrible beast appears from the mysterious northern lands, bearing a token of the demise of Tarl's once-beloved woman Talena. The missive is a sign of defiance and disrespect from his enemies, meant to humiliate him and force him to challenge them in response. To gird his weapons and set out on a mission of vengeance against those who sent the beasts means Tarl must jeopardize his fortune and position as a wealthy slave merchant.

But he is no longer practical and calm as he was on Earth. He must conform to the social codes of Gor, where the only way one can avenge wounded manhood is to respond with all one's might!

What listeners say about Marauders of Gor

Favourite of the series

So glad all the series is here, will try to get through them all eventually, this is by far my favourite

slow start but picks up.

a very slow start but as it goes on the pace dramatically improves. over all I'd say another glorious piece to the world of Gor.

When I was a teenager, I truly loved these books. As I listen to them now, I remembered that there were spots that I skipped over because John Norman has this thing about telling you the same thing over and over and over.... Now they just seem monotonous. Female slaves rape rape rape... little bit of action... Female slaves rape rape rape (but always the woman truly and deeply desires this treatment.) The manliness of her man, and the womanliness of herself over take any rational thought she might have. I guess when I was a teenager, just the word "breast" and the thought of a naked woman was enough to capture my attention... Now, not so much!

Too much emphasis on subjugation of females. Wow... They are slaves.... I think if he took one and fully developed her as a real woman and a companion to Tarl, this could have really been a good series. Realistically, I can't think of any real woman who would be raped repeatedly and willingly submit to and deeply desire her rapist, unless she had been physiologically damaged. There is way too much discussion about this and not enough emphasis on the action. Carl Tabot seems, at points to have deep loyalties, but when it comes to women, these can change in a flash. There has yet to be a woman in this series that he has stayed loyal to.

Maybe just for nostalgic reasons. They would need to perform the "Hollywood transformation" and make a lot of changes in the male - female relationship realm. Maybe have Tarlena actually become Tarl's companion in his adventures.

Ralph lister like the other books did a great job...please keep up the great work

Use it you won't regret it!

Great book. My favorite of the series. Tarl finds himself again, after so long of not really knowing who he is.

cant get over this guys voice.

Struggled to be brought into the scene with the english gentlman reader...
a book about barbarians slavery warriors... made me feel like getting a cup of tea... not what i needed... i have read the books myself and thoroughly enjoyed them...

waste of a credit.

Has Marauders of Gor turned you off from other books in this genre?

Would you be willing to try another one of Ralph Lister’s performances?

I might have enjoyed this book in print, where I could scan sections that I found inactive. As an audio book, there are too few events to keep me engaged.