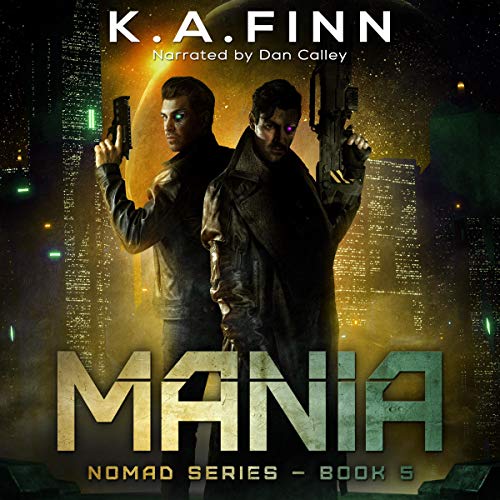 Gryffin uses his unwanted cybernetics to make the Nomad a group you fear. They travel the Outer Sector, taking what they want until they encounter an enemy. He’s forced to do something he never thought possible - protect the very people he was intent on harming. Soon, those who were once friends can no longer be trusted and Gryffin’s authority as Captain of Ares is questioned.

Brayden is in hell, accepting he’ll die on the moon keeping him prisoner, his years there leaving scars, both hidden and visible. Resigned to his fate, he’s given a chance at salvation, but there’s a catch. Destroy the cyborg project once and for all by hunting down the sole survivor.

What happens when these brothers prepare to go face to face for the first time in nearly two decades? Will their bond be stronger than those they’ve forged while apart or could the truth destroy them both?

Mania follows them as they fight their own demons and strive to find who they were always meant to be.

What listeners say about Mania

Circumstances right now prevent me from writing an extensive review. I will update my review as soon as I am able.


This continuation of the Brothers Gryffin and Brayden’s journey in life takes a drastic flip putting them both in a situation in which neither are prepared. Both are scarred and both need one another but are they strong enough to do what they must?
Mania is a fast-paced, action-packed sci-fi thriller. The world-building and what I can assume are callbacks to previous books, were spot on for how I would imagine the characters living. For not having listened to the previous books, I was not lost, and I was instantly hooked.
KA Finn is gifted with imaginative story-telling skills. Not only is Finn excellent at world-building, but also gifted at character development and building intense excitement as well.
Dan Calley’s wonderful narration provided an interesting and riveting story. Calley does a great job of humanizing the characters throughout the book. His voice was perfect and gave each character an appropriate voice.
There were no issues with the audio production or quality of this book. It was clear and crisp.
Disclaimer: This Audiobook was provided free of charge by the author, narrator, and/or publisher in exchange for a non-bias, honest review.

I totally enjoyed this awesome addition to the Nomad universe from the imaginative mind of K.A. Finn. Brothers Gryffin and Brayden are physically and psychologically damaged; they have been tortured, manipulated and betrayed. Their story is captivating, emotionally moving and provoking. The settings in which this story takes place are well-suited to the characters and provides additional realism. This fast-paced, exceptionally crafted, suspenseful story was well-plotted and adeptly revealed. The narration by Dan Calley captured the depth and emotion of the characters. I was provided a free review copy of this audiobook and an voluntarily leaving this review.

Mania, the fifth book in the Nomad Series, is brilliantly written and wholly engaging. The premise, world-building, and the characters in the series are incredibly captivating. Quite a bit happens in this book; it's surprising how much is packed into five and a half hours. The storyline is a fast-paced, thrilling sci-fi adventure with non-stop action and suspense. Gryffin gets control over his implant, full command of Ares, and redirecting the Nomads. Brayden is imprisoned under brutal conditions. He is broken out and given a second chance in exchange to end the last surviving cyborg, the Nomad leader. The story takes us back to how brothers' paths are crossed, which is fantastic. Excellent narration by Dan Calley. He continues to bring the characters to life, humanizing them while emulating personalities and emotions. Mania is a highly entertaining, suspenseful listen with quality narration; I savored every second of it. I'm definitely recommending this audiobook.