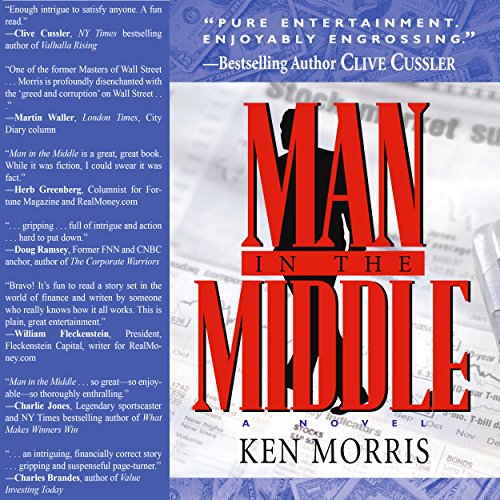 Man in the Middle

A natural contender for trading stardom, 28-year-old Peter Neil buys into the game of wealth-creation with such unbridled enthusiasm that he nearly gets sucked into the patent amorality of one of the world's most successful hedge funds. He's well on the way to becoming a Wall Street legend, but he has more obstacles than he's bargained for - a simmering romance, a persistent SEC agent, a long-buried secret, and a deep-rooted conscience. Together, these hurdles conspire not just to derail Neil's ambition, but to place his life, and the lives of those he cares about, in mortal danger. Neil is faced with a seemingly insurmountable task: how, as one reviewer puts it, to survive his "trek through the piranha-inhabited waters of high finance". The object of this game is no longer to come out on top - it's to come out alive.

Reviewers call Man in the Middle "an insider's foray into the cutthroat, rip-your-face-off culture of big-time global trading and corporate misconduct", "offering up a smorgasbord of insider trading, murder, and protection money". Ken Morris, whom the London Times dubbed a "Wall Street trading legend" and a "big-time master of the Street", is that insider, acting as tour guide through the treacherous trails of the financial jungle. Nearly 20 years at the top of the world's financial markets have made Morris an expert among experts, with a unique, finely-honed flair for storytelling. He's destined to become one of the day's foremost thriller writers - an "early John Grisham - at his best - with the investment world instead of law as the backdrop".

No other novel to date has successfully placed the listener so far inside the inner workings of today's capital markets - or made it so understandable and gripping.

What listeners say about Man in the Middle