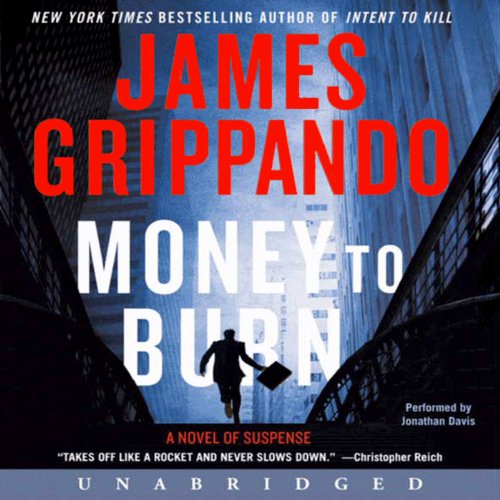 When Michael Cantella, superstar investment banker, becomes the victim of identity theft, it sets in motion a series of events that ultimately exposes shady dealings in the world of high finance and brings it crumbling down. Narrator Jonathan Davis delivers a performance that is full of tense excitement that complements the story's fast-paced action. Characters come to life through subtle changes in Davis's voice. A weakness is that long pauses at the close of chapters bring one out of the moment. However, Grippando's action-packed story and Davis's consistent narration quickly re-engage the listener.

In this timely stand-alone thriller ripped from the headlines, New York Times best-selling author James Grippando, whom the Wall Street Journal calls “a writer to watch,” explores a world in which the destruction of financial institutions and the people who run them can occur in a matter of hours-perhaps even minutes.

At 31, Michael Cantella is a rising star at Wall Street’s premier investment bank, Saxton Silvers. Everything is going according to plan until Ivy Layton, the love of his life, vanishes on their honeymoon in the Bahamas. Fast-forward four years. It’s the eve of his 35th birthday, and Michael is still on track: successful career, beautiful new wife, piles of money. Reveling in his good fortune, Michael logs in to his computer, enters his password, and pulls up his biggest investment account: Zero balance. He tries another, and another. All of them zero. Someone has wiped him out. His only clue is a new e-mail message: Just as planned. xo xo.

With these three words Michael’s life as he knows it is liquidated, along with his investment portfolio. Saxton Silvers is suddenly on the brink of bankruptcy, and he’s the leading suspect in its ruin. Michael is left alone, framed, and facing divorce, with undercover FBI agents afoot, spyware on his computer, and mysterious e-mails from a “JBU.” Embroiled in corporate espionage, he’s desperate to clear his name and realizes that several signs point to his first wife, Ivy, as a key player. But what if Ivy has come back from the dead, only to visit on Michael a fate worse than death?

With echoes of The Firm, James Grippando’s newest thriller takes readers to the inner circle of Wall Street, illustrating the very real dangers of what Warren Buffett called “financial weapons of mass destruction."

What listeners say about Money to Burn

Well written and read, this novel is perfect for Audible fans. It seems like nonfiction, given what has transpired this century.

And it’s one of those rare novels where I felt like I was in the story as well. It’s plot is nothing like The Firm, as I had read in some description, But it is a great read

I would highly recommend this book! I kept me spellbound from beginning to end. I couldn't wait to get in my car to see what would happen next.

What other book might you compare Money to Burn to and why?

I might compare it to "The Partner" by John Grisham It had that "cat and mouse" thing going.

Which character – as performed by Jonathan Davis – was your favorite?

When you think you have nothing to lose.....

I think this book was different than other James Grippando books. I LOVED it. He just keeps me interested ALWAYS. Another home run!

Good listen from beginning to the end!

What did you love best about Money to Burn?

I don't love anything about a book. I like it and this is a good one. The characters were balanced and this book had an ending that was consistent with the entire story. He did not have to resort to a long explanation of facts not presented earlier in the book in order to make the ending work. Although the ending was not predictable, it was logical. Good job.

What was one of the most memorable moments of Money to Burn?

The frustration factor on the hero's cooperation in the destruction of his own reputation.

Have you listened to any of Jonathan Davis’s other performances before? How does this one compare?

This was my second listen to Jonathan Davis and I like his performances. I will include him in my searches for a good listen.

yes, but long enough to enjoy over several days - and I could stop listening for a day and remember the story line when I picked it up again - It takes a solid story line to permit a break in the listen without confusing the characters when started again. Didn't have to rewind this to get back into the story.

Money to burn, but not time to burn

This is my second book by Grippando. Solid, strong characters. References to New York and New Jersey were right on. I love the suspense. I also really liked the narrator. I kept listening to find out what happened to Ivy (his first wife), Michael's money (who took it, how and why), who was destroying Saxton Silvers, why was someone wanting to kill Michael,. I enjoyed listening to how his life changed after his 35th birthday party. I could not fathom how his second wife (his high school friend Mallory) became such a b***h so quickly with so little information. The reader/listener found out why later.. There are also some surprises when unknown relatives are introduced midway through the story. The connections between the numerous characters keep this story interesting.

While this story is very mysterious and suspensfull, it at times, dragged abit for me because I am not into Wall Street or financial thrillers. Please don't say it is my fault for purchasing the book. I like the author and this story is very good. The financial stuff is just a background setting. I felt that if I was not driving my car and listening, it would be a waste of time. Some of the descriptive paragraphs lost me. It seemed that Grippando may have understood this as some of the paragraphs were very complicated and information was presented in "teaching" mode. Good background information to have, but I just wanted to the story to move on so that I could hear what was happening to Michael, his grandparents, Kevin, and Ivy. If reading this myself, I would have skipped over the financial parts. However for those who know the terminology and understand the machinations of this arena, it will be appreciated.

The deceit, disappearances, tortures, murders, money issues, peeks into rich people's lives made this story is a very good read/listen.

Not for Jack Swyteck fans

When an author has a long series of books featuring one main character I usually enjoy reading their non-series books. In this case, it seems that there is less character development of Michael than there is in the Swyteck books. Michael is much less likeable than Jack, And the story line is not very believable. The author seems to be trying to cash in on all the upheaval on Wall Street, but didn't find a good story to tell. My advice is to take a pass on this one.

I felt like Michael's father throughout much of this listen. I really didn't want to learn about all the ways that people can make money in the stock market, legal or not. And this is another one of those books where, with the possible exception of Michael's father, it's hard to find a character whom you like. With that said, Grippando probably told this story as good as it could have been told and, predictably, it turns out the way most of us would want it to turn out. Like much fiction, some of the twists and turns strained credulity, but that's not necessarily a bad thing. Listeners familiar with life on Wall Street will probably enjoy this book more than those with just a passing knowledge. I've met Grippando and I like him. I'm patiently waiting for him to knock my socks off with a really great novel. Money to Burn isn't it.

This book was full of suspense. I loved all the twists and turns. The plot, which takes place in the current financial crisis was unpredictable. The author tells a great story almost entirely without the use of the kind of foul language that detracts from a good story. The characters were interesting with the narrator making them even better. My time at the gym flew by. This is a great listen.

When you find yourself rooting for the bad guys, when you've said, "Oh, come on!!", for the fourth time, when you can recite the next sentence before the narrator says it, you know it was a mistake.
But you've spent your credit and the drive to work is still there. You convince yourself the the book is so bad it's actually entertaining. It's reassuring, in fact; you could have been, or even still could be, a novelist who could at least extrude a result like this. Maybe you'll even try it after all.
So you continue to listen with a superior smirk, the future novelist, learning by exception. How hard could it be?

I enjoyed this book --it kept my attention. I found it a little confusing when it discussed finance and investing-but was worth listening.

Nice Work Hurt by the "Love makes you dumb" Trope

Points for solid plotting and narration and special bonus points for not bogging down too much when explaining Wall Street terms, but we're supposed to be talking about a very smart guy . . . who suddenly starts making very stupid moves because LOVE. I get that the circumstances are supposed to cloud his judgement but there's a big difference between muddled thinking and no thinking at all.

Not quite beach reading because of the financial explanations but not quite a serious thriller because of the character lapses and occasional descent into useless technical descriptions but I made it all the way through and wanted to hear the ending, so a solid effort.