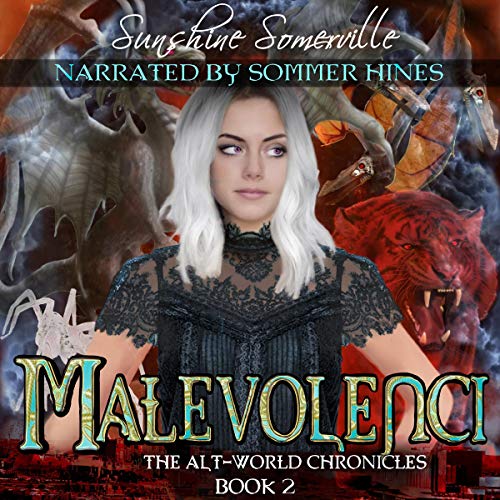 By: Sunshine Somerville
Narrated by: Sommer Hines
Try for £0.00

Traveling for work is brutal, especially when your job is hunting demons. Fortunately, Esme’s magic is now limitless. Together with Owen’s team, Esme battles malevolenci across the country, closing rifts along the way. But why aren’t the demons attacking at full-strength? Esme knows she must learn more about the enemy, but her investigations only lead to further mysteries.

Meanwhile, Owen has his own problems. While he rules from the road, the paranormals within the Order grow restless. The jinn are dabbling in civilian politics. The fairies demand an impossible return to their home world. Rebel vampires claim the Capiti healers are slaves. Age-old tensions rise, and civil war is looming. One thing might unite the Order - telling them how close they truly are to losing the war and what that will mean for the alt-worlds. But should Owen break eighty generations of secrecy? If the paranormals rally, Esme’s power will give them a shot at survival. And, if they find the malevolenci’s weakness, they could defeat the demons once and for all. How much hope dare they have?

With old friends, the queen mother, and unexpected allies joining the fight, Esme and Owen search for answers in ancient texts, dark caves, and blood memories… But some things are meant to stay buried. Uncovering the truth about malevolenci might win the war, but will it tear apart everything the Order believes?"

What listeners say about Malevolenci

Malevolenci, the second edition in the Alt-World Chronicles, is brilliantly written and wholly engaging. The world-building is phenomenal, and I was thoroughly fascinated by how Alt Worlds came to exist. I love the storyline, it's well-plotted, engaging, entertaining with loads of twists and turns. The characters are wonderfully-developed and utterly captivating, I was thoroughly intrigued by them. I'm totally invested in the series, and I can't wait to find out what's next.

An outstanding performance by Sommer Hines, she captured the nuances of the characters, emotions, and animation, literally breathing life into the story. Overall, Malevolenci was a fabulous listen and very entertaining, one I'll highly recommend.

I was given this book free for an honest review .

Esme and Owen are searching for clues to an old prophecy and trying to keep the demons at bay.
Loved this book and looking forward to book 3 especially due to the cliff hanger at the end of this book,

This sequel continues the story seamlessly from book 1, delving into the creation of the Alt Worlds and the truth is truly earth shattering for Esme and Owen. Their world is on the precipice of civil war, Rowan has been murdered, and an Original has returned! This book was a mind twister, and I can't wait to find out what's next in book 3. Sommer Hines narration was wonderful and expressive.

Seriously there better be a book 3 coming soon because the ending sucked...The book its self was sooo good...just like number one...but the ending...seriously cliffhanger much? ugggg

This series just keeps getting better! I loved the back story that happens and that ending?! Gah, I didn’t see that coming! I loved this audio book! Can’t wait to see what happens next! The narrator also did another a great job!