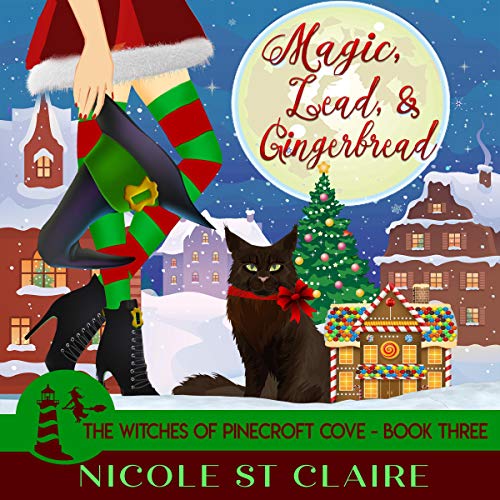 By: Nicole St Claire
Narrated by: Stephanie Murphy
Try for £0.00

The holidays start with a bang, when a cooking show judge is murdered in the Pinecroft Inn kitchen!

Christmas comes early, when word arrives that the Pinecroft Inn’s annual gingerbread house competition will be featured on the most popular cooking show in the country. But when a shot rings out in the dead of night and one of the show’s judges is found murdered in the inn’s kitchen, Tamsyn must figure out what happened before her beloved Aunt Gwen is thrown in the slammer.

As if the present isn’t complicated enough, there’s trouble brewing in the Roaring Twenties when rival bootleggers go to war, and Lillian’s caught in the middle. Has Tamsyn finally stumbled upon the motive for the flapper’s death?

The answers require another trip to the past, but this time, she won’t be traveling alone, at least not if Noah has anything to say about it. Is it Tamsyn’s magic that lets him journey along, or is the mild-mannered doctor hiding some secret powers of his own?

Working two cases nearly a hundred years apart would be a strain for any witch, but Tamsyn’s perseverance just might pay off when a clue from the 1920s leads to a breakthrough in her aunt’s case. But will Tamsyn’s revelation be enough to convince the authorities of Aunt Gwen’s innocence and bring the judge’s true killer to justice?

Don’t miss the third book in the Witches of Pinecroft Cove series of paranormal cozy mysteries!

A taste of the past

I really enjoyed this book. I like cosy witch mysteries and this one is definitely included in that group, although it is slightly different from the norm. Like most witches new to there craft Tamsyn doesn't know what type of witch she is but here is where it gets interesting and the author gives her character a twist, Tamsyn can see ghosts and travel in time in. This leads Tamsyn to not one but two murders to solve. This works really well and I like how the author switches between the two. This is book three in the series and so far my favourite, each book is a stand alone so you can enjoy this one without listening to the other's but it helps if you know the characters. The mystery (both of them) was interesting and kept you guessing. The cast of characters was fun, although a did think a lot of people could see a cat who was meant to be a ghost cat. Off to start the next book to learn more about the mystery surrounding Tamsyn mother and to see how her relationship with the hunky doctor develops.
Tamsyn isn't sure what to expect for her first Halloween after learn she is a witch but she certainly wasn't expecting to come down and find the room decked out for Christmas. It seems her aunt's gingerbread competition has been chosen to feature on her aunt's favourite cooking show. Three groups of contestants get to cook in the inns kitchen for the show showing off there skills. Representing the inn, Tamsyn is paired with the islands doctor. Measuring out the right amount of flour proves to be the least of Tamsyns worries when the host is killed and her aunt is arrested for the murder. At the same time Lillian, Tamsyn's ghost room mate is herself being haunted by a ghost, which is causing her powers to act up. It seems the ghost is not happy that she was killed and her murder was never solved. Tamsyn will have to literally walk in her shoes to travel back in time and find the clue that we stop the ghost from burning the inn down and what about her aunt, how can she prove to the hopeless police that she is innocent. can Tamsyn find the time to solve two murders and bake an award winning gingerbread house.
I liked the narrator and thought she did well giving each character there own voice.
I was given this free review copy audiobook from audiobooksunleashed and have voluntarily left this review.

Loved this book from start to finish great storyline
I was given this free review copy audiobook at my request and have voluntarily left this review.

This book has been in my virtual pile for awhile and I’ve been reluctant to start it because there are so many of hers that have been really disappointing. However, this was a nice surprise! I enjoyed the characters, the bits of magic, the magical things (won’t give it away) that are new (to me anyhow). It was a satisfying mystery that was completely solved by the end. There is an enticement to go to the next book, but it isn’t a true cliffhanger. I started with this book, which isn’t the first in the series, and I presume this has been an ongoing arc. Will definitely go back and start from the beginning. The narrator felt a bit too bright for me. I would have liked it a bit more mature and a little less “holly happy”. But she in no way wrecked it. I was given a free copy of this book for review but this in no way effected my opinion.

The only thing she knows is that she is not a kitchen witch but has no idea what to study to learn more. A baking show comes to town and the self-entitled judge winds up dead. Let the sleuthing and more humor ensue! But wait! There's another murder to solve when time-travelling to the flapper era! Excellent read.
Narrator Stephanie Murphy gives realism to each character and has a pleasant voice as well!

With a popular food show host dead and her aunt as the prime suspect, Tamsyn has her work cut out for her to solve the murder.
Opinion
Loved it! The story was cute and the narration was wonderful. I particularly lived what we found out about Noah and then Tamsyn at the end.

So much fun to read

I loved this book as well as the 2 previous"Tamsyn " books and can't wait for the next one! These "cozy" mysteries are so much fun to read.
The narrator did a fabulous job bringing all the characters to life!

I love this series! Works great as part of the series or as a stand-alone. Love Tamzen and her cast of characters. This story didn’t disappoint!