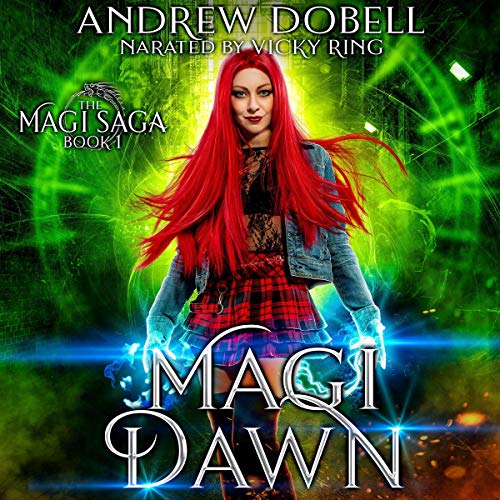 By: Andrew Dobell
Narrated by: Vicky Ring
Try for £0.00

Dragged down an alleyway. Attacked by a creature of nightmare. You discover magic is real, lethal, and you can use it. What would you do?

Amanda-Jane Page is just an ordinary girl struggling to make a living on the streets of Manhattan. When she discovers she has the potential to be a Magi, she’s drawn into a hidden magical civil war.

Her mysterious link to an ancient artifact discovered in the Egyptian desert draws her into a race to control its power. Finding others like her, together they must stop the dangerous and powerful dark Magi, led from the shadows by the mysterious witch Yasmin.

Amanda must learn the ways of magic to stand a chance against the forces arrayed against her. If the artifact fell into the wrong hands, it could change the war and mean victory for the forces of evil.

Amanda must accept her magical heritage and stand against the darkness in this gripping urban fantasy thriller!

What listeners say about Magi Dawn

Amanda-Jane Page was find it hard to make a living on the streets of Manhattan until she is dragged down an alley and attacked by something out of a nightmare , that’s when she finds out magic is real and she has magic.
She finds out she has potential to be a Magi and is drawn into a hidden magical civil war . She has a link to an artefact found in the Egyptian desert which draws her into a race to wield its powers, there she finds others like her who must all work together to stop a powerful Dark Magi a witch known as Yasmin.
I enjoyed listening and I am looking forward to more in the series.

I absolutely loved this book. The storyline kept me interested throughout the whole book. And the narrator was amazing. I usually don't say that about a narrator, but she made this story come alive. Would definitely recommend this story

Magi Dawn (The Magi Saga #1), my fourteenth read from author Andrew Dobell and the first book of The Magi Saga.Well-written and entertaining. I was given an Audible copy of this book & am voluntarily reviewing it. I was impressed and enjoyed the vocal variety & inflections of narrator Vicky Ring. The book was so good my family has taken to listening to it over watching television. I look forward to reading more in this series. (RIP Marley January 20, 2014 - July 24, 2018).

Well I really enjoyed Vicky bringing Amanda to life and will be looking forward to her next performance.