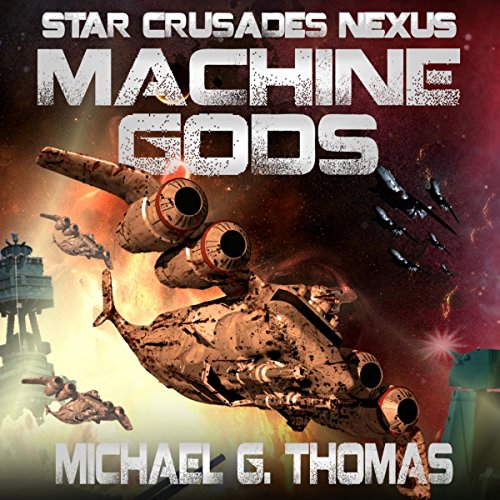 By: Michael G. Thomas
Narrated by: Brad McDowell
Try for £0.00

Machine Gods is the second book in the epic new series set in the Star Crusades universe that chronicles humanity's first steps away from Alpha Centauri and beyond.

After decades of war, the Alliance reached the Orion Nebula and discovered the advanced but shattered remnants of the T'Kari. People and ships are diverted to this rich area of space to continue its exploration and exploitation. At the same time a secretive faction of the T'Kari, known simply as the Raiders unleash attacks on any ships or facilities left unguarded, be it human or T'Kari.

A special operation against a Raider ship by elite commandos led by Spartan from the APS Corporation is the catalyst for something much greater. The simple operation quickly leads to disaster as the ship vanishes through an unknown Rift with Spartan and his team still onboard. With this disappearance, the T'Kari offer information that will change the lives of both races forever, the location of the mysterious star system known as Helios. This almost mythical central nexus is used by all known sentient beings to travel through the stars.

A grand expedition of civilian and military ships is formed to travel to the most important location in the Galaxy. Little do they know that something terrible and violent awaits them, something that has waited centuries for this very moment of weakness. If the Alliance military fails, then a darkness will fall upon Helios and every world connected to it, a darkness that will leave entire planets barren and sterile.

Star Crusades Nexus is a classic work of realistic military science fiction set against the background of the Centauri Alliance's expansion into the Orion Nebula. Also available is the prequel series, Star Crusades Uprising, that is set two decades earlier and covers the events of the Great Uprising that brought humanity to the brink of destruction.

What listeners say about Machine Gods