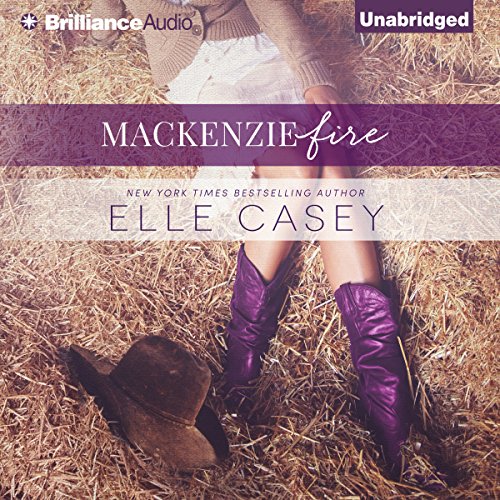 Still bitter about his failed engagement and life on the family ranch, Ian MacKenzie has been cranky for nearly three years. His brother Mack's married bliss hasn't helped, and now his pregnant sister-in-law's airhead best friend is coming for a visit.

Candice arrives to help with the new baby, even though it means swapping her Louboutins for snow boots and her flat irons for flannel. She's far from prepared for the freezing cold and she certainly wasn't expecting the sizzling heat of her attraction to a certain green-eyed cowboy. Ian may be rude and infuriating, but he looks sinfully good in those jeans of his.

The two clash at every turn, but there's one thing they can both agree on - if they do give in to their undeniable chemistry, then it's just a fling...because he's a country boy and she's a city girl, and their zip codes are on opposite sides of the map.

initially I doubted I'd continue , but

initially I doubted I'd continue , but the cheesy storyline became pleasantly entertaining.loving and tasteful.

I'm only at chapter 20, so not yet finished and I will finish it, but it's now starting to be a bit ridiculous!


Candence, the lead female, is in a situation with Neil, the lead male where they are confronted by a cougar. She has a gun, but doesn't really know how to use it. He tells her to give it to him (he's a cowboy), so can save them. She says no and then gets attacked by the cat (she knows that it's about to do so). To me this is Totally unacceptable and implausible. Who would be so silly? So I'm starting to withdraw from the novel, because I'm a mature listener, not a teenager...

I may add to this review when I finish the book, but only if it picks up from here on in.

Love the story of both people,the way the story twist a mbps d turns fabulous ending

love the story the creator's, it made laugh at some points . The narrator made the believable. well written

The main character was so annoying, I could not finish. She kept going on so much about her hair, makeup and clothes and referring to Oregon weather as the arctic Circle. I am someone who actually live in the northern most part of Montana, and am used to real winter. This book was too much ridiculousness to spend too much of my time on.

This was just as good as the first. Funny and cute story with great narration!

Better Than The First - If Possible.

I waited to read and listen to this book when I knew I had time to just sink in and appreciate everything Casey. And I did. I loved her spunk, her wit and her strength. There was no one more perfect for her than Ian and he was a cute cowboy! 🤠
I adored how he became his true self with her. The banter was hilarious and special. I know I’ll be back to read this one again. I miss being in their world already.

The narrator was prefect getting inside Casey’s head and expressing all her mannerisms and quirks. Loved it!

This was silly and cute. It's a fun storyline that I felt didn't go too overboard. It was enough to make me laugh and enjoy the antics the main heroine kept getting herself into. I think the narrator really added to my overall enjoyment of the book. She did such a good job of adding something more to the characters. I highly recommend going the audiobook route with this book. ***Borrowed on Kindle Unlimited.

The first book was good, but this one was so much better due to all the laughing I was doing. Good romance, characters, and fantastic narration made this a fun and even lighthearted listen. Recommended!

I usually don't like screwball comedy in my romance; my preference is for more angsty stories. But if you're looking for a little lighthearted fun, this is a good choice. The author made the heroine pretty klutzy, a bit of an airhead actually, lol. But by the end if the book, she redeemed the heroine & made her more believable. Jmo!

Loved this series and book!

This was a fun romp with wonderful characters and funny and touching story! I Greatly enjoyed! I highly recommend this book ant the previous one!

Loved this two book series. Found myself laughing out loud at times. Highly recommend; you won't be disappointed.

Love me some cowboy

Being a city girl myself and wanting to be a country girl I kind of envy this couple.

This was such a fabulous story. I absolutely died laughing at Candace and her way of thinking. Ian one my heart with his shenanigans and spirit.
This was a wonderful follow-up to Elle Casey's Shine Not Burn novel, but can be read as a stand-alone (although together the full laughable story, I recommend reading or listening to both).
Elle Casey has become one of my go-to authors for heart-warming romance with a bunch of dirty and a whole lot of laughter thrown in the mix. Her writing reminds me of what fictional romance is supposed to be about: the imagination, the escape, and the enjoyment of finding a happy ending.
The narrator chosen for this story was perfect. the accent, the inflections, and the overall presentation was spot on.