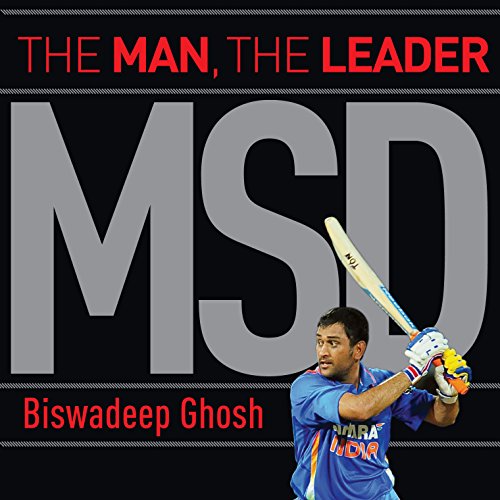 MSD: The Man, the Leader

By: Biswadeep Ghosh
Narrated by: Shriram Iyer
Try for £0.00

The most inspirational story in Indian cricket is that of Mahendra Singh Dhoni.

Generations will remember Dhoni for hitting the spectacular winning six for India in the finals of the 50-over World Cup in 2011 against Sri Lanka, but it is the hope he has given to many aspiring cricketers across this nation that is his true legacy. Born in the lap of poverty and having battled against unimaginable adversities, Dhoni's rise from being just another small-town boy to captain of Team India is a case study in B-schools. With grit, guts and matchless self-belief, Dhoni led India to an ICC World Twenty20, an ICC 50-over Cricket World Cup and an ICC Champions Trophy triumph as well as the number one ranking in Tests. Although he's had his fair share of disappointments, for MSD failure has been yet another motivation to work hard and succeed.

MSD: The Man, the Leader unveils Dhoni's struggles during his growing-up years, analyses his career as a cricketer and captain par excellence and reveals his innate leadership abilities by speaking to luminaries from different walks of life, including Harsh Goenka, Vineet Nayar and Dhanraj Pillay, in a jargon-free, easy-to-read style. Replete with examples of Dhoni's strong personality and inspiring leadership, and marking one decade of his entry into the Indian cricket team, MSD: The Man, the Leader will reinforce the belief: yes, I can.

What listeners say about MSD: The Man, the Leader