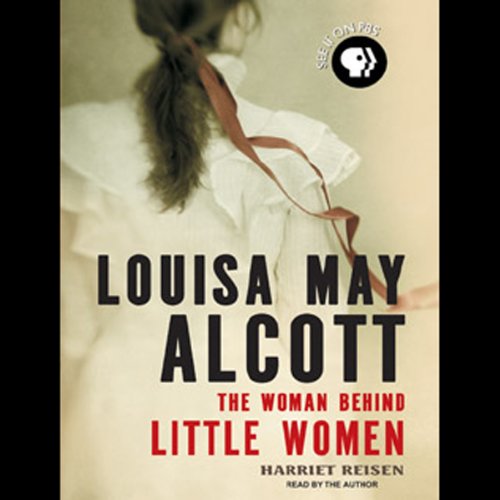 Louisa May Alcott portrays a writer as worthy of interest in her own right as her most famous character, Jo March, and addresses all aspects of Alcott's life: the effect of her father's self-indulgent utopian schemes; her family's chronic economic difficulties and frequent uprootings; her experience as a nurse in the Civil War; and the loss of her health and frequent recourse to opiates in search of relief from migraines, insomnia, and symptomatic pain.

Stories and details culled from Alcott's journals; her equally rich letters to family, friends, publishers, and admiring readers; and the correspondence, journals, and recollections of her family, friends, and famous contemporaries provide the basis for this lively account of the author's classic rags-to-riches tale. Alcott would become the equivalent of a multimillionaire in her lifetime based on the astounding sales of her books, leaving contemporaries like Nathaniel Hawthorne, Herman Melville, and Henry James in the dust. This biography explores Alcott's life in the context of her works, all of which are to some extent autobiographical. A fresh, modern take on this remarkable and prolific writer, who secretly authored pulp fiction, harbored radical abolitionist views, and completed heroic service as a Civil War nurse, Louisa May Alcott is also the story of how the all-time beloved American classic Little Women came to be. This revelatory portrait will present the popular author as she was and as she has never been seen before.

In the new biography, Louisa May Alcott: The Woman Behind Little Women, author and narrator Harriet Reisen writes not of the genteel, fictional March family, but of the impoverished, activist Alcotts and their obstreperous daughter who would become a world-renowned author.

Reisen begins by noting her fascination with all things Alcott, having spent much of her adult years researching the notable author, writing and producing various works about Louisa May and family. Reisen’s reading of the text is suitable to the subject matter, capturing Louisa May’s tone  from girlish euphoria to gossipy social commentary to curmudgeonly irritation. The Alcotts were lifelong abolitionists whose family friends included Henry David Thoreau, Ralph Waldo Emerson, Dorothea Dix, and Nathaniel Hawthorne.

Louisa May Alcott wrote poetry, short stories, plays, reportage, and children’s books. Reisen’s fascinating detail about Alcott’s success at gritty pulp fiction illustrates Louisa May’s ability to adapt her talent to what would sell. Under the pseudonym “A.M. Barnard”, Louisa enthusiastically wrote of the seamy, taboo topics that were supposedly unknown to women of polite society. Louisa’s lurid fiction paid the family bills from her late teens until the success of Little Women; yet until recently the connection between Alcott and Barnard was not known. Reisen’s narration is especially fun as she relates the story of two rare book dealers (both women, both devout Alcott fans) who were finally able to link lusty author “A.M. Barnard” to the paragon of family devotion, Louisa May Alcott.

When Bronson Alcott encouraged Louisa to write a story based on her own childhood, Louisa was slowly recovering from typhoid contracted while nursing Union soldiers. Little Women was a publishing phenomenon. Louisa May Alcott’s only literary rival at the time  in popularity and in book sales  was Mark Twain.

At the height of her literary popularity, nearly 50 years old and in declining health, Louisa set aside writing to raise the infant daughter of her sister, May, who had died in childbirth. You can hear the excitement in Reisen’s voice as she relates her own part in discovering and publicizing notes from the 1976 interviews with May’s daughter Lulu, the last remaining person alive who had known Louisa May Alcott. The interview with 96-year-old Lulu Nieriker Rassim had been only partially written about, had never published, and had gone missing after the death of author and Alcott scholar Madelon Bedell. In a moment of serendipity, a letter dropped from a used copy of Bedell’s book that Reisen was perusing. The paper contained clues that led to the recovery of the interview notes, which are now joyfully shared with Reisen’s listeners. Carole Chouinard

"A deliciously palatable biography of the iconic writer." ( Kirkus)

In her foreword/prologue, Harriet Reisen says when she first finished reading Little Women, she felt sad that she would never again be able to read the book without knowing what happened to the characters. I felt the same kind of sadness when coming to the end of this book. This is very well written, gripping, and interesting. If it had been narrated by a professional actor/narrator, it would have 5 stars (sorry Ms Reisen). She sometimes sounded like she was falling asleep or eating something, and didn't change tone of voice to indicate a diary extract, letter etc. Quite hard to listen to. If you think you would like the content of the book (which I'm sure you will) I would recommend buying a paperback version, you will also get any potential photos or extras in addition.

I knew nothing about Alcott's life before reading this book. I do remember as a child reading "Little Women" but do not remember much about it. What fascinating people she grew up knowing such men as Ralph Waldo Emerson, Hawthorne, Graham. She grew up in a time women had no rights and were very lucky to obtain any amount of education. Her Father's push to educate women was ahead of his time. Watching and helping her Mother try to support the family by sewing lead to her demand of herself to depend on no one to support her but herself and to do so by writing. It was only acceptable at that time for women to write children stories so she also wrote under a pseudonym for the pulp magazines. Her fight for women's right to vote and her push for an equal rights amendment was interesting. The women got the right to vote but we still do not have equal rights (Federal) still need three more state to reach the required 38.. You will enjoy this book.

writers really should resist the temptation to read their own work. this was one of the most uneven audio recordings i have listened to, largely because her voice changed constantly from soft and powdery to deep and gruff. and, it must be said, sometimes the technical side of it was pitiful. at times i had to listen to it through only one ear phone.

so. if, like me, you remember paying a small fortune for such a book before audibles, and you are grateful to get it at an affordable price, you will excuse the bad reading and enjoy the experience.

louisa may alcott s life is so interesting i think it would be hard to mess up a biography about her. this one is far from perfect, but it is illuminating, not only about her but about other american writers of the time, like thoreau and emerson. also, as a psychological study of a family, this book rates very high.

i never cared for her writing, did not read her as a little girl. i came across something she wrote when i was in college. it was in an original magazine from her time period, and it was so harsh i did not have a good impression of her at all.

but, having just read a bio of dorothy parker, i wanted another woman writer to read about, and this was what i chose, out of very slim pickings. i am glad i did. her life had so many layers, so much happened and yet so much never happened. i will listen to it again, and will never forget it. her s was a distinctively american life, and very much the life of a woman who was probably a genius but never allowed to live that out. the biography does a good job of uncovering why.

Before listening to this bio, I didn't know much about L.M. Alcott besides her major novels and some side comments from my mother (former English teacher). Reisen does an excellent job tying together contemporary resources, historical perspectives and presenting them beautifully. Her reading style is not dry and academic but full of her enthusiasm for her subject. I really enjoyed this book and the narrator.

Compelling look at an interesting life

I disagree with the first reviewer. The audio isn't perfect, but it isn't bad. I didn't find it distracting at all. The story Ms. Reisen tells is fascinating, and I really enjoyed the time I spent listening to this book. Louisa and her family led such unusual lives, and I've come away from this book with a new appreciation for her work.

Would you consider the audio edition of Louisa May Alcott to be better than the print version?

I didn't read the print edition, so I cannot answer this question.

Not possible! It took several times. Reisen's voice will lull you to sleep.

The book is solid, and the information is sound, which is why I got it. However, Reisen would probably serve her audience better by sticking to the writing part.

What other book might you compare Louisa May Alcott to and why?

I'm not sure I will be able to listen to the entire book due to the poor performance of the author/reader. She ought to stick to writing and allow a professional to narrate. Reisen might be tolerable for a 15 min reading at a book signing but NOT for 12 hours. Very disappointed as I adore Alcott and had looked forward to listening.

Sometimes authors should not be permitted to read their own material. The book was interesting and well written. But Reisen, while a good biographer, is a terrible reader - stilted, unemotional, dry....rather like a child trying to read Shakespeare. This would have been a lot more interesting if the reader had been a professional.