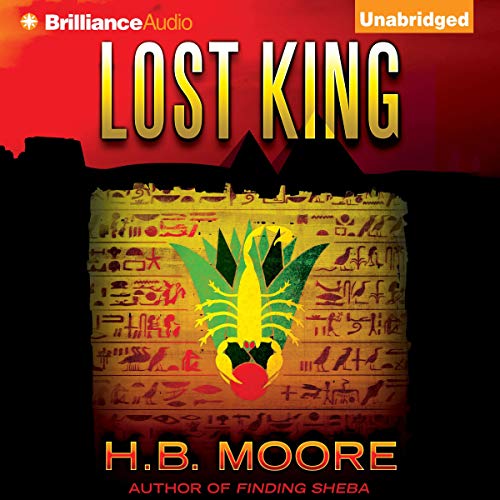 By: H. B. Moore
Narrated by: Bon Shaw

Undercover agent Omar Zagouri has been ordered to Giza. A prominent Egyptologist was murdered, and a priceless artifact - the only complete version of the Book of the Dead - is missing. Omar is still reeling from the recent disappearance of his girlfriend, Mia Golding, but he puts his quest to find her on hold to track down the lost piece of history.

Omar's mission is not just to locate the sacred book; he must also rescue the two archaeologists kidnapped and forced to translate its hieroglyphics under threat of death. Their kidnapper is determined to discover the text's rumored explosive revelation: that Moses did not receive the 10 Commandments from God but instead copied them from the Egyptians. Though Omar's need to find Mia grows more urgent, he must focus on finding the enemy who will stop at nothing to ignite a controversy that will change history, and the world, forever.

What listeners say about Lost King

Just as good as the first volume. looking forward to more. loved the fact that there is no foul language.

I was mesmerized by this audio. I looked forward to listen ing every nite read d it you will be glad. You dif

A two-part story with modern and ancient intertwined. Although I appreciated Omar's adventures, it was the story of the female pharoh that kept me listening late into the night.

The Omar/Mia story-line was just silly. Both Omar and Mia were portrayed as a savvy undercover agents but Omar just couldn't get down to business over worry for his girl. I was hoping the second book would just move on with their relationship, but it didn't. The narrator had problems with believable female voices. The voices all sounded whispering like Marilyn Monroe singing happy birthday to the president. Annoying.

After recently reading a couple of Omar Zagouri thrillers, and one short story, I could hardly wait to dive into Lost King, and it didn't disappoint me! Even though I didn't manage to read them in order, it wasn't nearly the issue I thought it'd be. Seriously, each story is complete and can stand-alone... That said, there is an overall story ARC that threads throughout the books. It's about Omar and Mia Golding's relationship (and I've become very attached to both of these characters), but the slight discontinuity really didn't faze me.
In this book H.B. Moore gives us a fictionalized account of Pharaoh Hapshepsut's (the Woman King) life, and a copy of the Book of the Dead written in her own hand...
Mia and Omar find themselves scrambling to recover this precious, history altering scroll/artifact before, anyone else has to die, and it disappears forever!
Once again, Bon Shaw gives us a stellar performance as narrator!
If you like thrillers, or Egyptian history, you'll want to read this one. Whether you read it chronologically along with the rest of the series, or out of order, I think you'll love this fast paced, action packed book!

I really enjoyed listening to this book. It's the second in a series and I am very glad to have found it.
I enjoyed it so much that I listened to the complete book in one day. The story was very good and the timeline in to the history was brilliant. The voice of the narrator deserves a big compliment because you completely forget that it's just the one person doing all the voices. Looking forward to the next book.

No, it just lost me with all of its meandering back and forth between Ancient Egypt and modern Cairo and Tel Aviv. I didn't finish it.

Better editing. The story didn't seem very cohesive and I found it boring. The characters are very flat and need to be better developed. Perhaps they were in the first novel?

He has a nice voice and can do accents well, but the performance seems more like reading and not a performance and was rather stilted.

Was Lost King worth the listening time?

No, I will return it.

This is the first book I've listened to by this author and I'm not impressed. The story was somewhat "hurky-jurky" and just didn't keep my interest.