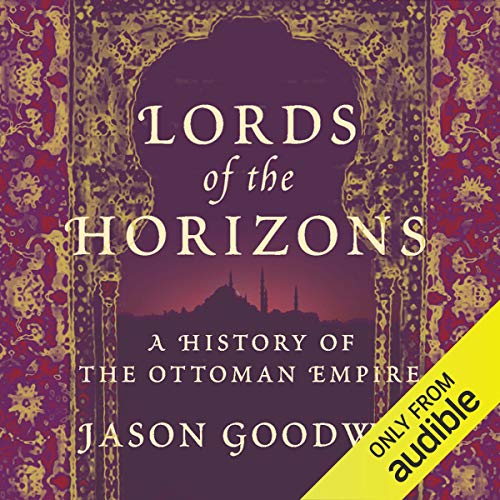 Lords of the Horizons

By: Jason Goodwin
Narrated by: Grahame Edwards
Try for £0.00

The Ottoman Empire has long exerted a strong pull on Western minds and hearts. For over 600 years the empire swelled and declined, rising from a dusty fiefdom in the foothills of Anatolia to a power which ruled over the Danube and the Euphrates with the richest court in Europe. But its decline was prodigious, protracted and total.

What listeners say about Lords of the Horizons

Lords of the Horizons is a beautifully written book that paints a portrait of a world fantastically different from our own. It gives an extraordinary insight into the Ottoman Empire and its rulers and people. What it isn't is a history in any usual sense of the word. Whilst guided by a vague chronology, it does not link one event to another and provides a series of anecdotes that form dreamlike impressions rather than understanding.

The narrator has a pleasant delivery but frequently muddles words or mispronounces them. This creates bizarre results so that a monastery is granted libertines and the empire has many tongs. Unsurprisingly, foreign names, including Turkish, are garbled and sometimes simply mumbled so it can be difficult to know what is going on.

Overall, it feels like much less than it should have been.

A victim of it's title?

Lords of the Horizons can be a challenging and perplexing book for those who expect to hear about the history of the Empire. I had read previous Audible reviews on the book and came into the book with a shifted mindset - ready to listen to a thematic rather than fully chronological approach. However overall the book is a little messy and I a not sure the author bridged the thematic approach to the historical one well. It shifts from thematic topics to historical ones wildly and often left me wondering aloud in certain chapters - 'Where the hell is the author going with this?. For example in Chapter 12 'Rhythms', I completely lost track of why the author was talking about different types of Ottoman bridges for a few minutes and was a little baffled. Even during the historical sections of the books the author would jump between decades and centuries that would probably leave someone unfamiliar with Ottoman History confused or not with a full understanding.

However as someone who is amateurishly familiar with Ottoman History there were some topics covered that interested me and added to my understanding of Ottoman culture - for example the author's discussions about the Ottoman concept of time or the Turkish love for cats rooted in Islam. However I wouldn't say the 13 hours of my life I used to listen to the full book was made worth it by these topics and the book should be titled something like 'A sociological journey through the Ottoman Empire' rather than the history it promises. This may leave the reader slightly more satisfied with the book.

There is definitely value to this book. Unfortunately the book's title of a history of the empire does not deliver for the reasons stated. If you are new to the Ottoman Empire I would recommend another book. If you have the spare time and are looking to develop your understanding of Ottoman sociology this is more the book for you. However I am not so sure it is worth the investment of your money/credit and time overall.

Finally, I am not usually a stickler for narration however pronunciation can be very poor, for example pronouncing 'Celtic' like the Scottish football team, Dolmabace without the Turkish 'Ch' sound and outright misreading 'Trebizond' as 'Trezibond'. So some schoolboy errors that left me frustrated.

Give it a miss.

Non balanced view. completely misses the the motivations of the various kings and sultans from all sides. anectodal and unstructured.

Difficult to take in

I didn't get much information from this book, it wasn't very easy to take in the information being provided.

I'm not sure if it was the delivery or the story but the characters and time periods were not very easy to follow, the state of the rest of the world and the era of the time wasn't always referenced, so I wasn't left with a good understanding of the history or the way of life of the Ottoman empire.

I so wanted to like this book but I found myself unable to follow it. Switching between a chronological and thematic approach doesn't really work; the historical side is too sparse and further reading is required to fill in the gaps.

I thought it was maybe that it was not suitable as an audio book so I bought the Kindle edition as well. When I started reading that I realised that the experience was even worse as its flaws could not be blamed on a failure in my concentration.

It presents itself as an introductory survey but it fails in this aim.

Great overview of the Ottoman Empire.

Descriptive, with some decent historiography, this narrative of the rise and fall of the Ottoman Turks is brilliant.

This is the story of the Ottamans from a totally western perspective. For all references are from western sources and it is therefore a total bias picture which should be taken as I believe it was intended, for entertainment not serious study.

The author is clearly a learned man and writes an interesting history of the Ottomans. The narrator has a pleasing voice, but a poor command of the English language. I started making a list of all his mispronounced words, garbled English, and just plain mangled utterances, but there were so many I gave up, and to list them all here would bore any reader of my review. I blame the producers of this audiobook for their poor choice of narrator and their appalling quality control in allowing such a flawed soundtrack to be released.
Read the book by all means, just don't listen to it.

A trifle chaotic but full of insights.

I don't think I'd pass an exam after hearing this, but it was very interesting just the same.

One of the most boring book , the author write like poem to the level he lost the meaning of history book !!!. Also very little coverage on the Middle East side of the ottoman

This is a book with a terrible narrator. I must say Im not very picky about narrators, but this is a very extreme case, as the voice is not only terribly slow and flat but also sometimes hard to understand. This is especially bad in the first hour.
As I'm very interested in the subject, I soldiered on and got through the end, the narrator got better, but never really good. If you can stand the defective narration there is a very interesting book here, as the history of the Ottoman Empire is both fascinating and crucial as we are talking about one of the biggest empires in the world from the 15th century onwards. Its an epic story which encompasses the history of Europe in the fateful clashes of the Turks with the West, and the history of the Ottomans is crucial to understand the modern world today from the Balkans to the Middle East to the North of Africa to Russia and World War I.
The book is well written and stylish. However, it is also somewhat haphazard in its structure. The writer is not a professional historian but a fiction writer, so sometimes the writing is a little more impressionistic. Also the book is chronological, but the writer chooses his chapter by subject or by theme, and then in the same chapter he flashes back and forward through time so the order of events is not always clear, and sometimes the book is more poetic than thorough. To go deeper this book in audio form should need to be at least 20 hours as the history of the Ottoman encompasses so many centuries and territories. Sample the audio before buying to see if you can tolerate the narrator, and if you do you will have a decent, but not definitive history of the Ottoman Empire.

The complexity of the Ottoman history screams through the narrative. Alas, the somnambulant performance needs to be endured to hear it. The story of bridging the civilizations of the East and West, existing from middle-ages to the 20th Century. The process of blending the mores, laws and cultures of diverse tribes and peoples across vast territories encompassing Hungary, Serbia, Bulgaria, Eastern Latin Empire and Turkey [Anatolia]. The Ottoman's provided a foundation for the growth of knowledge, medicine and economics. They expanded to the west while keeping Mongol influence at bay in the east. A must read/listen for someone interested in how we arrived at today.

I Wish I Could Say I Liked This More Than I Did...

I wish I could say I liked this book morr than I did. Jason Goodwin provides a comprehensive survey of the Ottoman Empire, and for the lay reader, it strikes just about the right level of detail, and fills in enough background to orient the reader to a world very different from our own. That said, it reads more like a series of essays than a book, with numerous repetitions and strange ellipses. Oddly, some repetitions occur within the same chapter, suggesting that some of the fault lies in the editing. Further, while narrator Grahame Edwards has an excellent voice, and conveys the text well, his reading is filled with mispronunciations, generally transpositions,such as "Trezibond" for "Trebizond."

Great summary but no chronological narrative

This is a great book for anybody looking for a moderate, not deep, dive into one of the most interesting empires in world history. It's goal is not a year to year narrative of the empire's history, but a broad description of the rise and fall of the House of Osmanoglu. For a few key events, like the Sieges of Constantinople and Vienna, there is a more detailed, traditional history is told.

Occasional mispronunciation but otherwise a satisfying performance by the voice actor.

Bad performance of a meandering book

The performance of the book is mushy, the writing wanders from narrative to sociological. Weak.