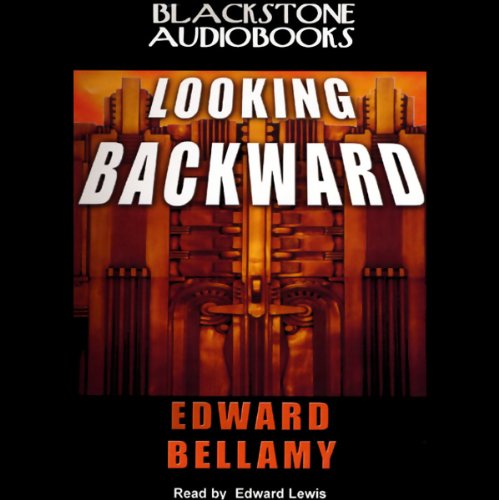 By: Edward Bellamy
Narrated by: Edward Lewis
Try for £0.00

The hero is anyone who has ever longed for escape to a better life. The time is tomorrow. The place is a Utopian America. This is the backdrop for Edward Bellamy's prophetic novel about a young Boston gentleman who is mysteriously transported from the nineteenth to the twenty-first century, from a world of war and want to a world of peace and plenty. Translated into more than twenty languages, and the most widely read novel of its time, Looking Backward is more than a brilliant visionary's view of the future. It is a blueprint of the "perfect society," a guidebook that stimulated some of the prominent thinkers of our age. John Dewey, Charles Beard, and Edward Weeks, in separate surveys conducted in 1935, listed Edward Bellamy's novel as the most influential work written by an American in the preceding fifty years.
(P)2000 Blackstone Audiobooks
Classics Literary Fiction Science Fiction
Show More Show Less

What listeners say about Looking Backward

A good presentation of a great classic

Looking Backwards is a classic of the late 19th and early 20th centuries which contains some of the early ideas of what would become the socialist movement. It is a Utopian novel in which a man form the 18th century is transported to the 21st. I think it is a fascinating picture into the 18th century mindset of what a perfect culture society could be.
To me this is not a book about what 'should' be, but instead it is about what 'could have been.'
The narration is crisp, if a bit fast passed, though to me this fits.
Overall I liked this version of the book and I would recommend it to anyone looking for an interesting glimpse into a possible version of our world today as dreamed up by a 18th century author.

What made the experience of listening to Looking Backward the most enjoyable?

We've all heard that (the love of) money is the root of all evil, but we can't imagine a world without it. This is exactly what the author does. He describes a world of the future where people act to benefit everyone, rather than having everyone do whatever it takes to get ahead. This is a story I'll listen to many times, because it describes the kind of future that I would like to be part of.

It's pretty interesting what people at That is time thought of the future, in which we live now. The reader gets to admire their forecasts, as well as gloat at their naivete. Plus there is some time travel involved.

The author uses an interesting premise to predict the future of America and the world from his 19th Century perspective. It is a true utopian novel full of hopes and dreams of a world where there is no bad, only good.

It is perfectly obvious why Bellamy clubs (also known as Nationalist Clubs) sprung up around the country in his time. There is nothing to dislike about the hopeful vision he projects in the novel.

Like so many utopian thinkers, going back to Sir Thomas More, the internal conflict within mankind over power vs freedom is smoothed over without detailed explanation. It is more dream than possible reality.

Still ... this is an enjoyable read.

A most excellent historical fiction read!

This was NOT what I expected but was still enjoyable. Bellamy creates a utopian society that has similar features to today's world, while criticizing the Gilded Age for all its vainglorious behaviour.

Well thought out, a little too long

The middle third of the book is well thought out, predicting the future, but a little long winded. I skipped quite a bit and didn’t miss anything pertinent.

Now I see How This Book Sparked a Revolution

This is truly an astonishing book, especially considering the time period in which it was written. I must admit, o'clock if not astounding. However, in terms of significance the book is that the up most caliber. The sentiments and implications of this book are among the highest degree.It has become one of my favorite books, and encourage everyone to read it at least once. It is more than just a book, it is a guideline for the future of our humanity.

This book was entertaining. This 19th-century sci-fi author was in many ways accurate.

Things he predicted correctly:
- women's suffrage and liberation*
- the gradual centralization of power and resources (enter Amazon)
- the invention of radio and advanced sound systems.
- the shifting ideas of human nature and mental health
- the changing relationship we have with music.
- and the disastrous effects that poor education and misinformation have on society as a whole
- High-speed tube transportation
- Data-mining

*Ok, by today's standards, this guy's views on gender and sexuality are problematic. However, back then there were far less cisgender males yearning for the day's of gender equality, and his
Random things:
- The capitalists fund the anarchists? My interest is peaked in learning more about both groups.
- How optimistic Bellamy was about the human spirit. It's refreshing.
Some things Bellamy DIDN'T correctly predict.
- Our love/hate relationship with the technologies that run our lives.
- That we wouldn't be that far along the timeline by 2000
- No mention of space travel
- No crime?
- No police?
- We don't need to write our receipts with a pencil on paper.
- More things

This book is worth another listen one day.

132 years later and Looking Backwards is still progressive in all its ideas for the Future. Equality and Freedom reign supreme over the otherwise corruptible people of the world. Thus the narrative reminds us that there was no "great time" in American history. The poor have always been and if Bellamy's dream isn't realized, they current gap between rich and poor will only get worse.