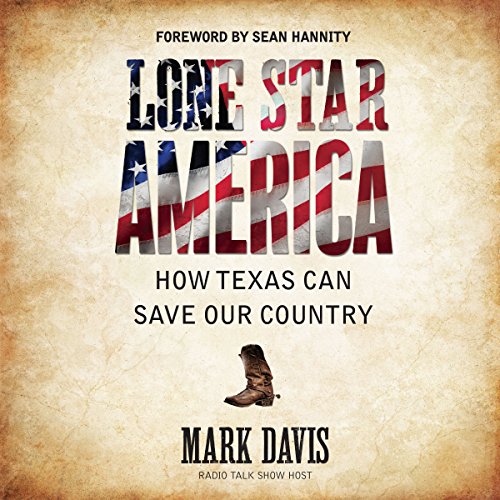 How Texas Can Save Our Country
By: Mark Davis
Narrated by: Mark Davis
Length: 5 hrs and 17 mins
Categories: Non-fiction, Politics

Throughout America and around the world, the United States has been known as a beacon of hope and opportunity, the land of the free and the home of the brave. Sadly, from the crumbling urban ghetto of Detroit to the cash-strapped shores of California to the rust belt of the Midwest, America is not living up to that promise.

While unemployment soars elsewhere, Texans are hard at work. While small businesses across the country are going under, Texas' entrepreneurs are thriving. While large companies are being squeezed by taxes, regulations and unions, more and more corporations are moving to Texas to grow and expand. While people of faith are ridiculed and marginalized in most cities on both coasts, in Texas churches and synagogues are bursting at the seams.

How did Texas embrace what the rest of America seems to have forgotten? In Lonestar America, popular talk radio show host Mark Davis presents a powerful case for economic prosperity, individual freedom, strong families, and even stronger pride of place - alive and kicking in Texas, and easily exportable to the rest of America.

Davis shows how Texas has done it, how some "honorary Texans" in other states (governors and even local communities) have adopted some of the same policies and approaches, and how states across the country can reclaim the promise of the American dream.