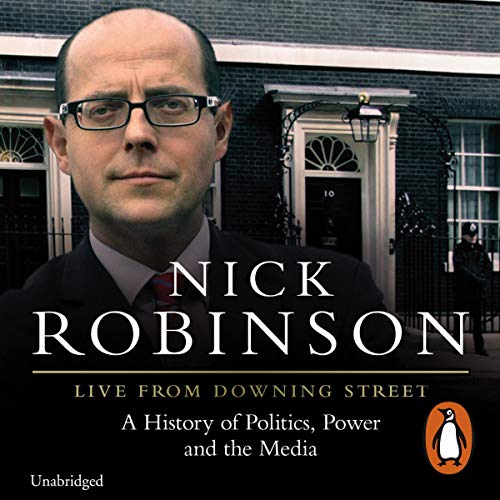 By: Nick Robinson
Narrated by: Simon Shepherd
Try for £0.00

The relationship between those who wield power and those whose job it is to tell us what they are doing has always been fraught with tension. Politicians now expect to be on camera and facing aggressive questions from the moment they open their front door to the moment they return home at night. Everything they say and do is instantly broadcast and dissected on 24-hour news channels, blogs, and Twitter. It was not always this way.

Live from Downing Street takes us on an absorbing journey through the hard-fought battles for the right to tell the public about the decisions taken on their behalf. Parliament once imprisoned those who dared to report what MPs had said. Broadcasters used to be banned by law from debating anything newsworthy and even from covering elections. Since that censorship ended, the two sides have clashed repeatedly. We follow the fluctuations of the power struggle from Walpole to modern times, dwelling in fascinating detail on those who fought back - Churchill, Wilson, Thatcher, and Blair.

At the same time we learn of the emergence of the equally charismatic key players from radio and television: the Dimblebys, Day, Frost, Walden, Paxman, and Humphrys. Nick Robinson provides a colourful and personal examination of what life is like as the BBC’s Political Editor – a role described in a report for the White House as "the most important job in British political journalism".

Peppered with informative but witty anecdotes, his account reveals his own considered view of the controversial issue of impartial reporting. Live from Downing Street is a gripping story written by someone uniquely placed to add his own perceptive insights and observations.

What listeners say about Live from Downing Street

Great content. Well narrated too apart from possibly the worst attempt at almost every kind of accent you care to mention. Still worth listening to, just brace yourself.

Nick Robinson's book 'Live from Downing Street" is a great book. When I bought this audiobook I was expecting a worts and all autobiography giving a gripping insight into the life of a top political journalist. If you are looking for that, then this book is not it. As Robinson says in the introduction "now is not the time" as he is still an active journalist currently working on Today on Radio 4.


What "Live from Downing Street" manages to do effortlessly by journalistic skill is to weave memoir with history lesson. Robinson tells us about his journey to the microphone and the influence of his grandfather in particular. Bernhard, a Jewish refuge from Germany who fled with his wife, Susan as Hitler came to power.  Also a key influence was Brian Redhead, who was the father of Robinson's closest childhood friends


The book is also very interesting because it charts the development of political broadcasting in Britain and the battles to permit it, first on radio and later on television.


This book is great, it wasn't what I was expecting, but it was extremely interesting and worthwhile never the less.

The is a very enjoyable, well written and very well read political potboiler. Whilst not exactly ground breaking, it is nevertheless a well compiled review of the author's career and the political leaders that populate it. Although it didn't tell me too much that I hadn't read about in various places, it certainly held my attention and I enjoyed enough to give it 4 stars.

A fascinating book. I think what you will take away is a good appreciation of how the BBC works with its constituents (the licence payers) and its titular (assumed by the titulator) 'boss', the government of its day. I was sorry to hear this book end.

Enjoyed this, what a shame it ends during the Cameron era, I would love to hear the commentary on more recent events, too.

Good book marred by bad decisions in the telling. The reader is fine in the “authorial” voice, but can’t (simply *can’t*) do accents.

There are also mispronounced place names and sections where the sense is lost (or at least confused) by poor reading/stressing.

Nick Robinson has shone a light on a world which the public so rarely get to see.
it revels the complex relationship between those who govern us and those who attempt to report.
it excellently spells out how lucky we are in britain to have the BBC and ITN
this is a must read for anyone interested in politics, the media and public affairs in general.
bravo Nick bravo.
also the narrator is rather excellent too

Fascinating insight into media and politics

Really enjoyed this book, fascinating insight into the birth of the BBC and the way politics has been reported in our country

I tried to put this in words but can not. It's amazing to hear the history of how political events were reported in contrast to now, and to get an idea of what happens on the inside. A great listen indeed!

Was pleasantly surprised that it included a sort of mini-history of the BBC and news journalism, which makes this book much more interesting than simply a potted-history of 10 Downing Street's reporting.

What made the experience of listening to Live from Downing Street the most enjoyable?

The incredible stuffiness and inability to realise the value of, first radio, then television. The fact that it took the Queen to put down a firm fott with regard to the planning of her coronation

What was one of the most memorable moments of Live from Downing Street?

President Bush 43 telling Nick to cover his Bald spot'
Nick, mistakenly thinking he was out of earshot muttered, I didn't know you cared
Bush . I don't

Do stop asking this daft question. It took nearly a week of careful listening. Then I started it all over again and found stuff I had missed the first time

Fascinating. I even twittered him admiringly