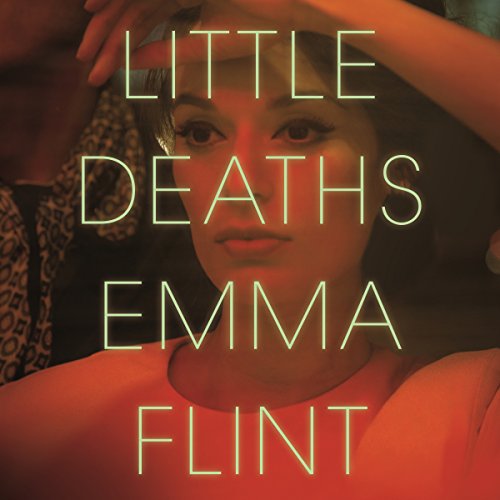 By: Emma Flint
Narrated by: Lauren Fortgang,Graham Halstead
Try for £0.00

It's a mother's worst nightmare. When Ruth's children go missing from their apartment, everything about her life is analyzed by the police and the press. Is there a right and wrong way to act in the face of such tragedy?

It's the summer of 1965, and the streets of Queens, New York, shimmer in a heat wave. One July morning, Ruth Malone wakes to find a bedroom window wide open and her two young children missing. After a desperate search, the police make a horrifying discovery.

Noting Ruth's perfectly made-up face and provocative clothing, the empty liquor bottles and love letters that litter her apartment, the detectives leap to convenient conclusions, fuelled by neighbourhood gossip and speculation. Sent to cover the case on his first major assignment, tabloid reporter Pete Wonicke at first can't help but do the same. But the longer he spends watching Ruth, the more he learns about the darker workings of the police and the press. Soon Pete begins to doubt everything he thought he knew.

Ruth Malone is enthralling, challenging and secretive - is she really capable of murder?

Haunting, intoxicating and heart-poundingly suspenseful, Little Deaths is a gripping novel about love, morality and obsession, exploring the capacity for good and evil within us all.

What listeners say about Little Deaths

A gripping listen from start to finish!

This was a really great listen that kept me gripped all the way to the end! The contrast between Ruth being heartbroken for her children's deaths set against the prejudice and misogynist opinions of the police force is done really well and makes you realise the struggle women had (and often still do) back in the 60's for being independent, wearing certain outfits or having relationships with men out of wedlock.

We are told right at the beginning that Ruth went to prison for deaths of her children and therefore the books focus is about how the police came to convict her. I think the real questions this book makes you ask if what was Ruth really on trial for in the end? The murder of her children or her behaviour as a woman deemed inappropriate by a world run by men.

It was such a fascinating listen and the dual narration of the book between Ruth and the Journalist covering the story worked perfectly. I would highly recommend!

Was she on trial for murder - or immorality?


This debut novel is based on the true case of Alice Crimmins in 1960s New York who was found guilty of murdering her two young children even though there was no conclusive proof that she had killed them. Books have been written about the case, but what Emma Flint does with it is remarkable, not least in creating such a thoroughly American novel that it is hard to believe that she is British.

Alice Crimmins becomes Ruth Malone in Flint's novel. She's an 'attractive red-haired cocktail waitress' with all the sleazy connotations that entails, and is in the middle of a very bitter custody battle with her husband Frank over their two young children Frankie and Cindy. We know from the opening scene that Ruth ends up in prison, so we know she'll be found guilty. The interest then is in the how and why this verdict was returned.

Flint unpeels Ruth's life struggling to support the two little children she loves, failing to look after them in a conventional way and indulging in a great deal of noisy sex with a lot of men, much disapproved of by the neighbourhood in the mid-1960s district of New York. Her dissolute way of life (the empty bottles in the trash can; the children waking at night to see strange men, or just an empty apartment) was enough to seal her fate but more 'conclusive' evidence was her reaction when her children went missing from the upstairs apartment and were later found murdered. Always caked in immaculate make-up with hair and nails just-so, Ruth went shopping for a new dress the very next day and though she was completely destroyed inside, she refused to cry in public. Intrusive neighbours, prejudiced investigators and the Press which buzzed 'like flies around rotten meat' judged her: she'd obviously killed those children who'd got in the way of one of her relationships with a man not her husband.

Sgt. Devlin is determined to nail 'the bitch', but club reporter Peter Wonicke thinks she's innocent, falls in love with the idea of her, and becomes obsessed with proving her innocence. What makes the whole book so good is the insight and sympathy with which Flint creates Ruth's grief-stricken life after the children disappear contrasted with the harsh, duplicitous case built up against her by a society quick to condemn a woman whose skirts are too short and who openly enjoys sex and dancing with random men. Like Alice Crimmins, Ruth is eventually released and Flint leaves us with a totally convincing conclusion in which she learns what really happened and accepts her role in the tragedy - this last brief final section is a brilliant ending both satisfying and thoughtful.

The thoroughly American dual narration is absolutely in tune with the changing moods and characters capturing both the harshness and the delicacy of the language.

Would you listen to Little Deaths again? Why?

I would recommend it to others, most definitely - but I wouldn't listen to it again, purely because I don't like to read the same book twice.

I could have sat and listened to it all in one go. I read up about the true story that this book is based on and I found it so interesting. I just wanted to see where the author would take the book. In real life, you don't know who killed the children. I think Emma's adaptation is great though.

I loved it. The performance from the two readers is great. I highly recommend.

One of the best I've listened to. The story was gripping and although I guessed who the guilty party really was it in no way detracted from the enjoyment. It my first experience with this author but I look forward to reading or listening to more of her work. Highly recommended!

Good story ..goes on a bit..never seems to get to truth..Another frustrating end..Could be more indepth..

This story is based on real events in 1960s New York and concerns the disappearance of two young children from their mother Ruth's apartment in Queens. They are later found dead and Ruth is charged, after a blundering, masochistic investigation by local police, with their murder.

Ruth protests her innocence but her subsequent behaviour is interpreted by the police, her local community and the wider world as evidence of her guilt. No-one seems to consider that her behaviour might be her way of handling her grief. A local reporter is first persuaded to report the case in a sensationalist way but as he begins to observe Ruth and question her friends and neighbours, he begins to fall under her spell. He is gradually persuaded of her innocence and sets out to help prove it, even at the expense of his dream job.

The problem Ruth faces is that she is an intelligent, frustrated woman who is trapped in a life of domesticity and motherhood. She loves glamorous clothes, make-up and looking 'just right' but from the moment she moved into her neighbourhood her neighbours, young and old, have formed negative opinions of her. She is separated from her loving but boring husband and although she loves her children she struggles to cope with everyday life and the role of single mother. Her use of alcohol as a prop, her frequent trips to bars and clubs and her many boyfriends and active sex life all provide talking points for the neighbours when the police are looking for witnesses and evidence against her.

Ruth is eventually charged with murder but the case is rooted in misogyny and failure to investigate other possible suspects in any meaningful way. Is she being charged with murder on the basis of her lifestyle and morality or on hard evidence?All well and good so far. But then comes the trial and we discover that the piece of evidence which the police claim to be a clincher is actually very suspect. Maybe things were different in 1960s America, but the witness (and the defence lawyer's response to the evidence) certainly would be laughed out of court today, I feel.

But my main criticism of this story is that there was a huge plot hole/contrivance towards the end of the trial which I am amazed the book's editor did not address. At a key point the story dissolved into farce for me because I could not believe that lawyers would let various claims go unchallenged.

Having said that, the final half hour of the story was brilliant; the denouement was a surprise I did not see coming. Deftly written, poignant, moving and sympathetically narrated.In many ways Emma Flint's novel is an accomplished and interesting read. The quality of the writing was great and the story was compelling. I could see it all going on in my head and could happily watch it on TV or in the cinema ( with plot revisions.)

The readers were excellent; not irritating at all. But, I did not really care about any of the characters and so the story was dull and the ending was flat.

This thriller ticks all the boxes. Wonderfully observed, meticulously plotted and beautifully written . This book bends the genre half tense courtroom drama half Shakespearean tragedy. It is also the most genuinely feminist book I have read for a very long time exploring what it truly means to be a woman and a mother.

Really great performance, the story just felt a little obvious at times and you knew what the characters were going to say next.

From the first word until the last this book will grip you. The most beautifully executed tale of prejudice, assumptions and judgement that will absorb you and stay with you for a long time to come. Highly recommended