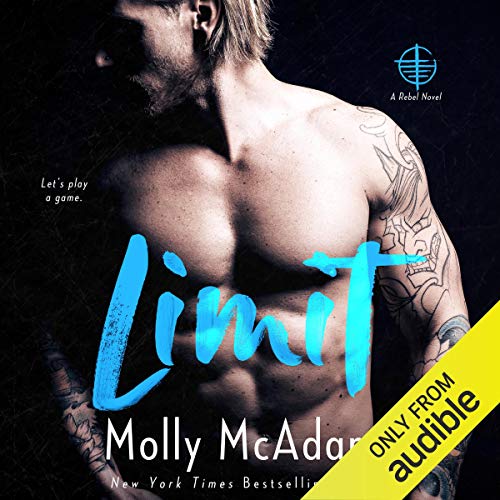 Protecting people isn’t simply my job - it’s engrained in me. It doesn’t atone for my countless sins. There’s no washing the blood off my hands after a lifetime in the mob. I just want to save those who can’t save themselves.

Then Sutton Larson came at me with diamond-encrusted heels. She’s judgmental and guarded and the most infuriating woman I’ve ever met. Gaining her trust is nearly impossible. Protecting her is anything but easy. When she becomes more than a job, our passion builds like a brutal storm - beautiful and consuming.

But we have an expiration date made of lies and betrayals and lethal games. One we thought we could outlive. And it’s taunting us for thinking we could.

My name’s Conor Kennedy. I’ve lost enough people in my life...I refuse to lose her.

What listeners say about Limit

It has been a really good series and this book was great and the narrators are awesome to. Thanks for another book 😊

I loved reading the book, but listening to Jason and Erin bring the characters to life brings it to a whole new level!

This was a bitter-sweet listen as it’s the final thrilling book in the Rebel three book series and it captivated and chilled, warmed and shocked its way to the HEA for all. It’s been great getting to know these characters over the series with their dark backgrounds, their hang ups, hidden agendas, strengths, weaknesses and hearts.. and I’ll miss them all. They made a crazy family and an elite team whose mission was to rescue and relocate abused women and children who were in danger with no way out. And Sutton was one of those women.. or so they thought.

Conor and Sutton’s journey was fraught with tension, secrets, lies, betrayal, bloodshed, twists and endless mind games - because Sutton’s manipulating, controlling, psychotic, twisted, monster of a husband had been pulling her strings for years - as well as mentally and physically abusing her for so long that she didn’t know up from down. She’d been brought up privileged but brainwashed and ‘programmed’ to serve her husband. Once rescued, Sutton felt safe in Conor’s caring and protective arms, she felt hope for her and her sweet six yr old daughter and she felt desire, desired, lust, longing and love for the first time in years. But she also felt remorseful.. because there were things she was hiding from this mixed band of dangerous, suspecting, unhappy brothers.. and the truth will out at the worst time, will devastate, will shake things up, will have brother arguing with brother.. and will open up an opportunity for a very bad man.

Great to hear about the characters from the previous two books who were front and center as the drama and action unfurled. Great alpha, possessive, loyal tattooed hero who was torn and being forced to choose between his brothers who didn’t trust or like Sutton vs. his heart which now belonged to Sutton and little Lexi. Great dual POV narration too.. but Jason (sigh) and Erin are always outstanding. However, I could have smacked Sutton several times for being hopeless.

Worth a credit? Yes definitely.. it’s got passion, emotional turmoil, romance, pulse-pounding action, challenges, suspense, sex, bloodshed and angst.. which makes a bucket full of feels.. but they should really be listened to in order. Thank you Molly for another great listen.

listen to this!!! Both Series!

Worth every credit! I loved all the stories and characters. Conner SO deserved his HEA!!! Holy cow what a ride!!!!

I was so excited to read Conor's book especially since he was a character that was always around through both series and I was wanted to know more about as I read each book. I felt like he was an unappreciated character in this book and didn't like how everyone else treated him. But I also didn't really feel his connection with Sutton. So it was less about the romance for me. Sutton is hard to like because she has no many secrets and doesn't trust anyone and time and time again she puts their life in danger by not sharing information.

I will say the build up to this point was so good as they are searching for Zachary. It was a great cat and mouse game that had the whole tram banding together after what happened to Einstein. Very exciting and suspenseful read.

The narration was really good. Had no problems at all with the narrators. I of course love Erin Mallon and Jason Clarke is always great.

Loved it! Good series, all 3 books excellent wish there were more in the series

I really love this series, this was very bitter sweet for me because its over now but So worth the ride guys! Jason and Erin are absolutely amazing and nailed it brining these characters to life! I cannot say enough about these two. I wasn’t sure about Sutton at first… I felt for her in every way but I got so angry with her at times! And Conor… oh Conor! Talk about SWOON! I want me a Conor!! He loves fiercely and I love that about him. It was so wonderful to hear from all the characters in this series and the epilogue is just perfect! Loved everything about this series and book, thank you Molly!!

Jason Clarke (swoon). I have withdrawals when I go too long without listening to Jason and Erin together. They're usually pretty good together. A few misses here and there but this one was a hit. Loved how the author ended the series and when I get to hear Jason narrate. I just can't help it...lol. Great strong characters in this series and definitely held my interest until the last word.