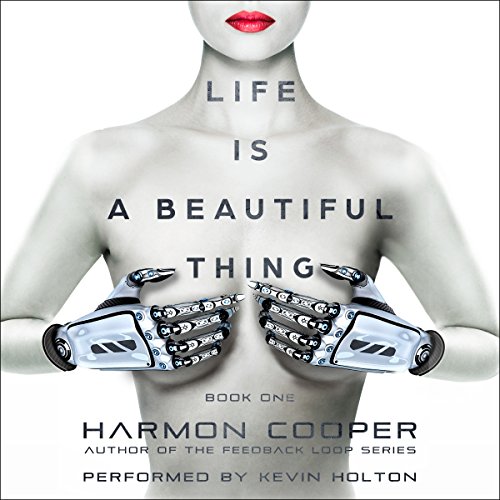 Life Is a Beautiful Thing

By: Harmon Cooper
Narrated by: Kevin Holton
Try for £0.00

A pollute-addicted therapist named Meme battles his way through his mind and LA at the seat of his pants alongside a beautiful android escort with a surprising secret. With the Federal Corporate Government hunting him, will he make it to safety in time?

The hunt is on.

Harmon Cooper, author of The Feedback Loop, Fantasy Online, and The Last Warrior of Unigaea, turns it up a notch with this futuristic, psychological thriller steeped in cyberpunk and designer intoxicants. Listen now!

What listeners say about Life Is a Beautiful Thing

Full Disclosure... I couldn't finish it.

The synopses looked like something I'd be interested in, but for a cyberpunk scifi story, this was a snore. Definitely needed a better narrator and could use some ambience. Perhaps I have been spoiled by Games Workshop's audio dramas, but this is about as interesting as a D&D session with a DM that takes themself WAY too seriously with a group that would rather play mobile MOBA games on their smartphones than roll dice... But that's what I took away from it.

My favorite part of the story was the idea of body switch. In theory that would be cool, but like everything that sounds amazing there’s consequences. The narrator did a great job in bringing the story to life!

I must admit this was a hard book to review. I'm a huge fan of Harmon Cooper and the interwoven worlds he's created. This is definitely a cyberpunk adventure. Our 'hero' is Meme, a drug addicted therapist of human droids, and as such we witness him doing drugs quite frequently. And I must say I was quite impressed with the way Harmon wrote this story because at times you will likely feel like your are tripping right alongside Meme. Word of warning, this book is definitely geared to a mature audience and is loaded with drug use, sex, and violence. As my review title indicates, the story is quite trippy, with one heck of an ending. Great twists!

I received a copy of this audio title for free in exchange for an unbiased review.

Badly written ”novel” trying to be provoking and deep. It fails badly on all accounts.
The poorly recorded narrator tries to sound cool but his fake rasp scratch in the ears like bad poetry. Awful. Just awful.