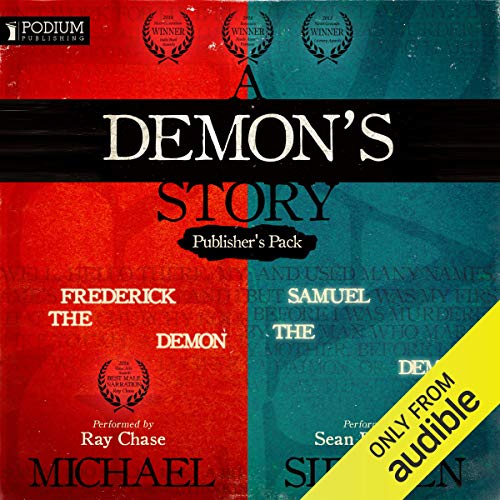 1. Frederick the Demon (formerly A Warm Place to Call Home): Frederick is a demon. Born in Maryland in the early 1980s, he hasn't a clue where he came from or why, but feels an irresistible desire to occupy a human body. Once inside, he finds the previous occupants' consciousness and memories forever erased, an inevitable side effect that gives Frederick pause when switching bodies, but not so much as to truly halt his ongoing enjoyment of human lives. In various bodies, he travels the world for decades - aimless - sampling cultures and experiencing life from the points of view of males, females, young, old, rich, poor.

Now, Frederick has an urge to return to his roots in America, explore the mystery of his origin, find someone to love, and settle down for a while. In his hometown, his mission bears fruit much faster than he expected, as person after person presents themselves, and following his impulses, he is lead directly to love, tragedy, answers, and the humanity he never knew he wanted.

2. Samuel the Demon (formerly The Many Lives of Samuel Beauchamp): In this prequel to the highly acclaimed novel A Warm Place to Call Home (A Demon's Story) by Michael Siemsen, the best-selling author turns back the clock - from post-WWI California to late 1950s New York City. For reasons unknown to him, Samuel's essence remained after his body was killed, and he discovers that the living emit an irresistible force, drawing him inside where he has the power to take over.

After surviving the great depression in the body of a young hobo, Samuel spends years studying the history of his condition, moving from body to body when necessary, and finally settling in New York City in the late 1950s. Following a few years of relative serenity, his beautiful and brash girlfriend disappears, and his search for her uncovers answers to questions he never asked.

I originally picked up this book because the summaries looked right up my ally, and because I have always adored Sean Runnette. I have not listened to any other books narrated by Ray Chase until this book, and oh my goodness, I am absolutely smitten!

There are 2 books here, and they are very different, so I shall review both of them.

1. Frederick
I was really surprised by both these books because they are very unexpected takes on the typical demon story line. Frederick has lived a very colourful life; living in a wide variety of bodies all around the world, and living in both male and female bodies with all the different orientations out there. After a while, he (oddly enough) decides that he wants love. I am not keen on love stories, and I never listen to anything with romance, but I really liked Frederick’s story. Ray Chase’s narration is phenomenal. If it wasn’t for his performance I can’t say for sure that I would have enjoyed this first book as much as I did. The ending takes an unanticipated turn, and I was very impressed by how this book isn’t predictable. I was expecting to like the second book in this set more than the first, but I actually prefer Frederick’s story over Samuel’s.

2. Samuel
I have mixed feeling about this book. I really enjoyed the parts where Samuel is a hobo in the depression era, his later insatiable thirst for knowledge, and his scholarly endeavors. However, Samuel enters a very abusive relationship with his girlfriend. The cycles of abuse are very apparent, and quite honestly, I do not want to listen to stories with such subject matter. I wish this aspect of the book was mentioned in the summary, because I really did not care for the many chapters involving Samuel’s crazy and manipulative girlfriend. As I mentioned above, I am a huge fan of Sean Runnette, so I did listen to this book in its entirety because of the fantastic performance.

Overall, I think this book is a great deal as you do get 2 books in 1, and both of them are superbly narrated. I will be listening to more books by Ray Chase from now on. If you are not familiar with him, you are missing out! I am still giving these books 5 stars all around, despite my not liking of the subject matter in book 2. Please note, though, that book 2 revolves around a very descriptive abusive relationship. If that is not your cup of tea, it is possible to purchase Frederick’s story on its own.

The story deepens in book two quite a bit

A Warm Place to Call Home is very interesting and quite fun when a story makes you want to cheer for the bad guy. I was cheering for Frederick, however, he makes a lot of dumb choices and it aggravates me! I spent half of the book wondering if I should put it down. Fortunately I did not because it gets GOOD!

Frederick has some issues. Most of them he brings upon himself. I have to say though I do not know what I would do in his place. He thinks he’s a demon but really only his actions speak for being a “demon”. He travels the world and figures out he can jump in and out of bodies, leaving them comatose afterward. In his defense he does feel badly about some of them, but that doesn’t stop him!

“Who’s every heard of a demon named Frederick? I’m the only one that I know of. But to be honest that statement should carry little weight since I’ve never met others.”

The story is a great change from the normal demon stories I’ve read. Very intriguing! Many of Frederick’s choices annoy me but for the most part I wanted to know what was going to happen to him. It is worth the wait. The twist at the end dazzled me! The clues are there but never in a million years would I have come up with what happens. Love that Michael Siemsen was able to throw me for a loop!

The narration of Ray Chase was fantastic. It was only Frederick who got on my nerves. Listening to the narrator was a pleasure and really helped me dive into the story. Ray Chase does a great job of bringing the story to life and keeping me wanting, even when I’m annoyed with Frederick, listening and wanting more!

The Many Lives of Samuel Beauchamp threw me off but not like Frederick did. I was curious why Michael Siemsen set the books up the way they are. This seems, at first, like it should be book one. Very soon into the book though I realized why. This book would be a spoiler for the first. It goes backwards in the plot line but gives away the information that is learned in book one.

That said, I loved this one! There’s so much more in book two and Samuel is very easy to love even though he also makes mistakes but nothing like Frederick in book one!

Again, the narration by Sean Runnette was wonderfully done and kept me listening and wanting more. The characterization of Samuel was great, especially when he runs into things he does not want to do, which is often!

In short: Both books were great. The story deepens in book two quite a bit. The audio and narration are spot on. I’m hoping there will be a book three. I will be first in line to listen!

Audiobook purchased for review by ABR.

12 of 22 people found this review helpful

The first half was good