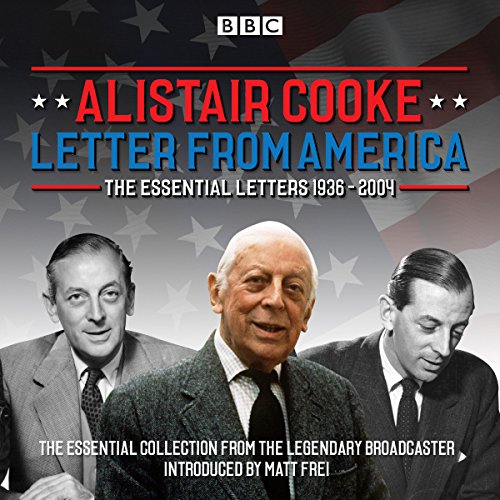 All six volumes of The Essential Letters from America, brought together for the first time in this definitive chronological collection of Alistair Cooke's finest broadcasts.

Alistair Cooke was the doyen of foreign correspondents and a radio legend, entertaining millions of listeners for over 50 years in his weekly Letter from America. It was the longest-running show in radio history, and every show was a virtuoso performance.

In this selection of his best and most memorable letters, Cooke reports on landmark political events from presidential elections to Franklin D. Roosevelt's funeral and the assassination of JFK. He reflects on the war in Vietnam, the Watergate scandal, the Monica Lewinsky affair, the Watts and Rodney King race riots in LA in 1965 and 1992, the Gulf War and the terrible events of 9/11.

Here are Cooke's observations on the Challenger space shuttle explosion, Black Monday, the catastrophic San Francisco earthquake of 1989 and - in his final letter - President Bush's difficulties with the situation in Iraq. But there are also letters in a more personal vein, as Cooke reflects on topics close to his heart such as sport (the Ali vs. Liston fight, baseball star Joe DiMaggio and golfer Bobby Jones) and music (pianist William Kapell, jazz singer Louis Armstrong and composer Irving Berlin).

The letters are set in their historical context with a specially commissioned script narrated by award-winning broadcast journalist Matt Frei. This collection also includes a bonus programme, Remembering Alistair Cooke.

What listeners say about Letter from America: The Essential Letters 1936-2004

I really enjoyed this journey down memory lane having listened to Letter from America for most of my adult life. In his amiable style Alistair Cooke ranged in topics from the mundane to world-shattering events. A compilation of his broadcasts to treasure.

For many years I eagerly anticipated the broadcasts of these letters each week, so what a joy to have another opportunity of hearing Alistair Cooke's wonderful voice, and the composition and delivery of his fascinating insights.

And Matt Frei's introduction to each of these selected letters in chronological order, is just right, not intruding but adding helpful information.

And after you reach his final letter, with what could be real sadness, there's a tribute programme that was broadcast by the BBC after his death, that adds even more to the background and context.

I have just finished listening to the letters and I feel like I have lost a friend . I learnt so much about America, the people, their culture,their politics, and the many famous (and otherwise ) people he knew and met.

I doubt we shall see his likes again.

Brilliant just wanted more, a history of a great broadcaster and human being. Will listen to it again all the way through sometime soon.

An absolutely wonderful listen. Thoroughly absorbing, and highly informative. Make you wonder what he'd make of the world today.