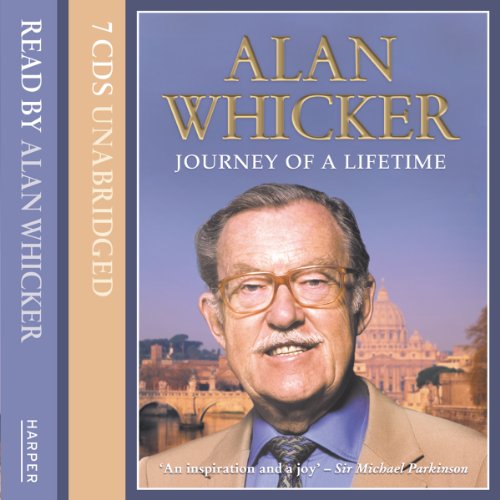 Journey of a Lifetime

"You might say I'm set in my airways. I'm one of those lucky people whose professional and private lives blend exactly." Alan Whicker, 2007

This sumptuous book, to accompany the major BBC TV series of the same name, is a glorious celebration of 50 years in front of the camera.

For as long as most can remember, Whicker has roamed far and wide in search of the eccentric, the ludicrous, and the socially-revealing aspects of everyday life as lived by some of the more colourful of the world's inhabitants. Since the late 1950s, when the long-running Whicker's World documentary was first screened, he has probed and dissected the often secretive and unobserved worlds of the rich and famous, rooting out the most implausible and sometimes ridiculous characters after gaining admittance to the places where they conduct their leisure hours.

The great man's legacy contains a number of genuine TV firsts. As well as landmark interviews with figures as diverse as Papa Doc, Paul Getty, and the Sultan of Brunei, he was a pioneer, covering subjects like plastic surgery, gay weddings, polygamy, swinging, and gun-toting cops, fly-on-the-wall style, for British screens long before anyone else.

This wonderful new book is the end product of a very personal journey. Whicker retraces his steps, catching up with some past interviewees and reflecting on how the world has changed - for good and bad - over the passing of time. Journey of a Lifetime is lyrical, uplifting, and peppered with our favourite globetrotter's brand of subtle satire.

What listeners say about Journey of a Lifetime

I loved Alan Whicker's TV documentaries over the years, and this audio book brings them back to life. Some of the narration goes off on a tangent, but when Alan is talking about the highlights of his life, such as meeting Papa Doc, it is spellbinding. Well worth downloading.

As soon as I heard the author’s voice I was taken back to my youth when my family used to watch Wicker’s World and be given a glimpse of other worlds. This book is a series of essays gleaned from programmes going back to the 1950s interspersed with anecdotes from his war-time experiences. The writing is like his commentaries: fluid, entertaining and non-judgemental. The latter even when recounting his meeting with the Sultan of Brunei and the obscene extravagance of him and his family. The chapters about his interactions with Papa Doc are as jaw-dropping now as they were when First broadcast. As with his programmes, there's a bias towards interviews with the rich and powerful with an undercurrent of viewing them as another species.

I enjoyed this book all the more for hearing Alan Wicker’s voice again: a little more gravely with age but utterly recognisable. I suspect the book will appeal more to those of us who remember his ground-breaking programmes in the 60s and 70s, though he sustained his output for Wicker’s World until the early 1990s.

Highlights of a 50 year career in TV journalism

Alan Whicker was a successful journalist who began his career in an army photographic unit in WWII and went on to create a 50 year television career interviewing interesting people from around the globe. In this memoir, he discusses some of the interviews he considered to be his most memorable. The range is a wide one, from brutal dictators, to devout bare-footed nuns and a wide range in between.

For those who remember and liked Whicker’s World , this will be an excellent purchase. For those who don’t know about him it may be a little less accessible, as it will probably mean that you are relatively young and may not relate to some of the topical issues and bygone celebrities. On the other hand, there are some interviews that are timeless and hearing Whicker discuss them is enthralling. As far as the delivery is concerned, it is typical, but a rather old, Whicker.

For Whicker fans, this is a definitely good buy, for those who have not heard of him I advise listening to a sample of this book first.

Poignant, understated and dignified. Last listened at length to those familiar, unmistakable tones a few decades ago! A pleasure!

I bought this book in one of Audible's sales, and am very glad I did. It is a super audiobook. Alan Whicker's deft turn of phrase and gift for drawing a character or place in a few words, coupled with his perfectly paced narration makes this such a pleasurable listen.

My only caveat about the book is that you need perhaps to be of a certain age to really appreciate the book - anyone under the age of, say, 40 might not be very familar with some of the people he meets and describes, and part of the pleasure is wallowing a little in the nostalgia of a bygone age. For an oldie like me, however....just wonderful. Best audibook I've listened to for quite a while.

Thought this book was wonderful. I always had an intrest in his travels and his TV documentries, he sometimes takes the scenic route when telling a story but this is part of his charm and the book is the better for these little excursions. The only problem ive found was, his voice is so deep and calming i would nod off and then have to rewind. Must download his time in the army.
WICKER?.....WONDERFUL'

Love the voice and the way he uses words to build a picture of where he is. It was because of him I developed my wander lust and for that I will always remember him

Anecdotes from an interesting life

This is a very interesting book that was meant to go hand in hand with the series of the same name that was on ITV last year. I hadnt watched the series and feel it is a worthy listen without having seen the series and am inspired to hunt it down.

The stories range from his stay and interviews with Papa Doc to living in rural Jersey.

Fascinating book, my only issues are with the chapters. Chapters seem to an hour long but include multiple book chapters, this makes navigating to where I left off when using different devices difficult

Good in places but somewhat jaded I thought

If you could sum up Journey of a Lifetime in three words, what would they be?

Kind of fizzled out

He sounds tired as well he might be at his age. I am not convinced he should have read it himself. However his fans would no doubt disagree on this one.

No, it is not for that. It is a book to dip into, chapter by chapter.

Alan Whicker was a TV mega-star in his time. However times move on and many of his stories no longer resonate as they did when he wrote them. The world has moved on faster than he could have imagined and in a very short time. Thus his book is really a glimpse into the past, which may or may not interest the reader.