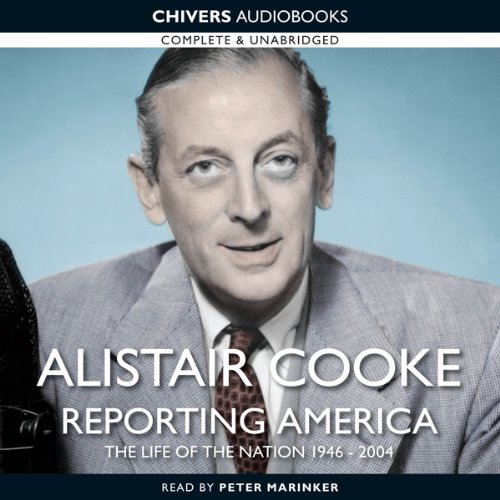 Alistair Cooke was the greatest of all twentieth century reporters of life in America to the rest of the world. This book presents the cream of his writings on the events that shaped modern American history, from the end of the Second World War through to the assassination of John Kennedy and Bobby Kennedy (Cooke was actually present), the moon landings and the Monica Lewinsky scandal. Almost all the material will be new to Cooke fans – transcripts of his legendary Letters from America, long-forgotten reports in the Guardian (whose correspondent in New York he was for 25 years) and other freshly discovered writings.

Alistair Cooke actually spent more than 50 years in America, but this documents his "Letters from America" program that ran from the 1950's until his death in 2005. It does provide a lot of first-hand reporting of the major points in American history--Kennedy's Assassination, the Civil Rights Protests, Watergate, and many more.

Its a huge throwback to a time when a member of the media would start the day with teh New York Times, write an article, finish his day, sit drinking a cocktail as he watched the 3 major networks give their "news", and then would write the next day re-inforcing the media themes. It was all very cosy and clubby and as long as there were no competing sources for information, it made the people doing it feel like they were kings of the world.

Cooke brings an interesting perspective--especially in the early year--from his English background. And this book has some long recollections from his daughter.

All the audio is either his daughter or from Cooke himself. And he had such a smooth and polished delivery that its never boring.

This was a truly fascinating sweep of history and Alistair Cooke's life. I thank his daughter and publisher for the time and care that went into selecting the letters and the thoughtful narrative that humanized his work. I've been talking to my grandmother about this book, as she is 87 and would enjoy its scope and the perspective it provides.