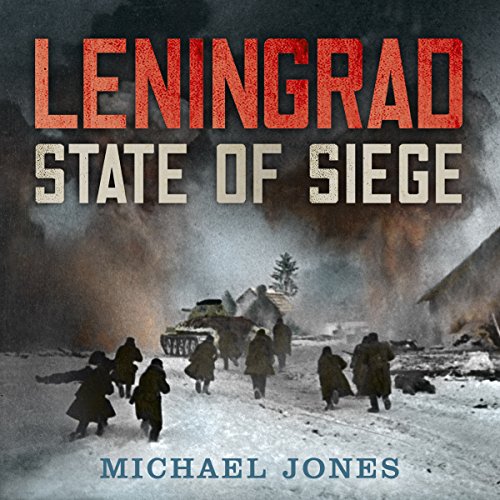 By: Michael Jones
Narrated by: Simon Shepherd
Try for £0.00

In 1941 Hitler's armies blocked the last roads leading into Leningrad. What followed was one of the most horrific sieges in history.

When the German High Command encircled Leningrad it was a deliberate policy to eradicate the city's civilian population by starving them to death. As winter set in and food supplies dwindled, starvation and panic set in.

A specialist in battle psychology and the vital role of morale in desperate circumstances, Michael Jones tells the human story of Leningrad. Drawing on newly available eyewitness accounts and diaries, he shows Leningrad in its every dimension including taboo truths, long-suppressed by the Soviets, such as looting, criminal gangs and cannibalism.

But for many ordinary citizens, Leningrad marked the triumph of the human spirit. They drew deeply on their inner resources to inspire, comfort and help one another. At the height of the siege an extraordinary live performance of Shostakovich's Seventh Symphony profoundly strengthened the city's will to resist. When German troops heard it in their trenches one remarked, "We began to understand we would never take Leningrad.'

Yet Leningrad's self-defence came at a huge price. When the 900-day siege ended in 1944 almost a million people had died, and those who survived would be permanently marked by what they had endured, as this superbly insightful and moving history shows.

What listeners say about Leningrad

Great insight with historical and personal anecdotes and well told. This story is gripping, yes it’s a mix of history book with personal accounts, but there is continuity of individual stories and the extremity of the accounts is very powerful. Profoundly thought provoking.

Well performed audio. Story not strong but from a social and civilian point of view this audio deals with the peoples plight more than the military situation. It is very descriptive and informative and points out the shadow of censorship that distorted history from the Soviet side.