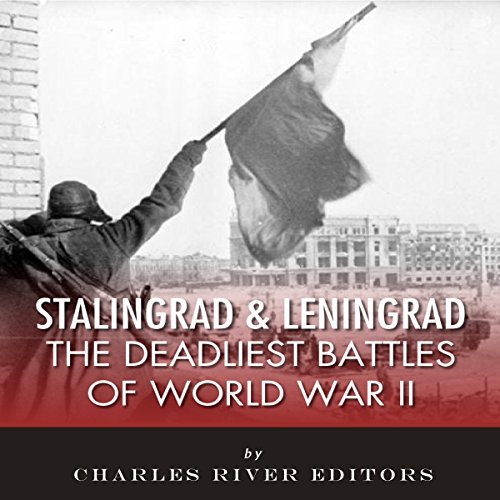 Stalingrad and Leningrad: The Deadliest Battles of World War II

By: Charles River Editors
Narrated by: Tom McElroy
Try for £0.00

"When Barbarossa commences, the world will hold its breath and make no comment." - Hitler

World War II was fought on a scale unlike anything before or since in human history, and the unfathomable casualty counts are attributable in large measure to the carnage inflicted between Nazi Germany and the Soviet Union during Hitler's invasion of Russia and Stalin's desperate defense. The invasion came in 1941 following a nonaggression pact signed between the two in 1939, which allowed Hitler to focus his attention on the west without having to worry about an attack from the eastern front. While Germany was focusing on the west, the Soviet Union sent large contingents of troops to the border region between the two countries, and Stalin's plan to take territory in Poland and the Baltic States angered Hitler. By 1940, Hitler viewed Stalin as a major threat and had made the decision to invade Russia: "In the course of this contest, Russia must be disposed of...Spring 1941. The quicker we smash Russia the better." (Hoyt, p. 17)

Once the Siege of Leningrad began in the fall of 1941, the Soviets knew they were in a desperate struggle to the death. In fact, the Russians wouldn't have even been given a chance to surrender if they had wanted to, because the orders to the German forces instructed them to completely raze the city.

What listeners say about Stalingrad and Leningrad: The Deadliest Battles of World War II