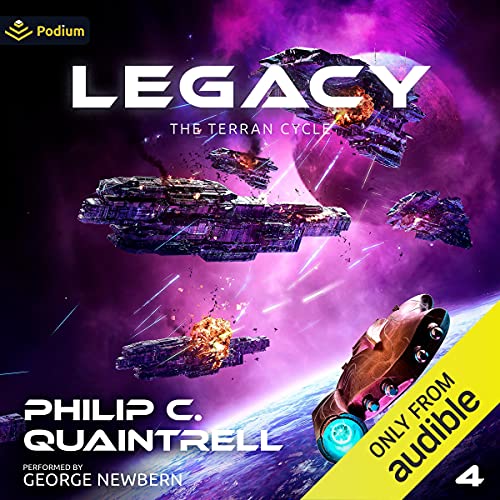 By: Philip C. Quaintrell
Narrated by: George Newbern
Try for £0.00

They wiped out humanity's ancestors. They laid waste to the Terran Empire. They destroyed Earth. Now, they have come to harvest what remains.

The Conclave has been preparing for war, but no one guessed the scale of what waits on the edge of the galaxy.

Humanity's battle for survival has spread across every world. The planet Evalan shelters the remnants, but too few remain to keep the enemy at bay.

Kalian Gaines can only see one way to win the war. If he chooses that path, will the cost of victory be too high?

With human and alien blood being spilled, Roland North is in his element. Might the fate of humanity rest on the kind of decision a natural-born scoundrel hates to make?

What listeners say about Legacy

Good finish to an enjoyable series. a little predictable . a good pace to the story.

never read the Author before but he writes a gr8 story and has a gr8 imagination.