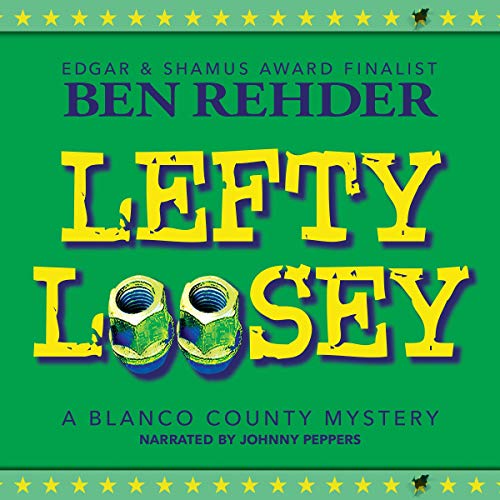 By: Ben Rehder
Narrated by: Johnny Peppers
Try for £0.00

Deke Gilbert was a legend on the central Texas demolition derby circuit, until a suspicious late-night crash ended his life. Unfortunately, Deke left behind a teenage daughter, Christie, who now has nowhere to go. That’s when good ol’ boys Red O’Brien and Billy Don Craddock step up and, in a rare moment, do the right thing. They give Christie a place to stay until her 18th birthday, just a few months away. But things get complicated when Christie brings home gossip that draws Red and Billy Don into an investigation of Deke’s death. Soon, they are on a collision course with one of the baddest men in the county, and it quickly becomes a wild ride that none of them will forget.

What listeners say about Lefty Loosey

Narrator: Johnny Peppers
I like this narrators voice and he does a good job with the characters.
I am a fan of this series and as with the others this story is highly enjoyable, we get to see a new side to Red O’Brien and how much his friendship with Billy Don Craddock means to him.
I did miss game warden Marlon and the usual deputies tho.
Overall it was another great visit to Blanco County.

Loving this series, Another great plot and strong and fun characters to listen too.

Red and Billy Don are so entertaining and so are their friends. A great mystery .

Down the rabbit hole

This was a very different book from what I have come to expect from this author, mainly because John Marlin who I think of as the main character in the series didn't even put in an appearance. I still enjoyed the adventure because Red and Billy Don played much bigger parts and there softer side has been showing for a while now but with this book it really comes out that they aren't the goofball/ bad guys they like to pretend. The story did jump around as it is told by multiple characters, one of which was on the whacky side, so it took some time getting use to his particular ticks. The mystery turned out interesting in the end but was a bit slow to begin as it sets up the plot. This is book twelve in the series but it shows no signs of coming to an end or of losing it's spark and quirky humour.
When a demolition derby drive does in a car crash the last thing Red expected to do was take in his teenage daughter. It turns out he is related to Billy Don by marriage or something or other (who pays attention) and now Red gets saddled with her when she has no where else to turn. It also turns out that there might just be a little bit more behind the accident than everyone thought. With Reds dislike of faith in the police he and Billy Don has no choice but to start there own investigation into the death. Can they tap into there more maternal side and help the teenager in there care of will there redneck ways prove to much?
I liked the deep voice for the characters of Billy Don and Red so thought Johnny Peppers was perfect as the narrator.
I was given this free review copy audiobook at my request and have voluntarily left this review.

This was an extreme episode of the life and times of Red and Billy Don. Totally u predictable and edge of your seat action and drama! This is one wild and crazy ride you can't miss. Checked it out. I voluntarily listened to a free copy of this and am giving an honest review. The narrator did a great job with voices and expressions bringing it to life.

Far and Away my least favorite book in the series. I like red and Billy Don as bit characters however I don't feel they can carry a book