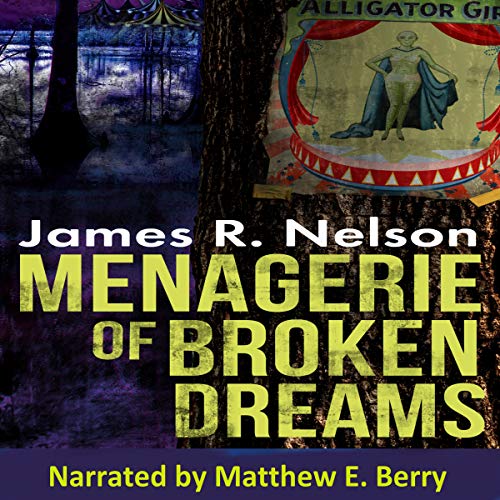 Young Stephen Moorehouse is excited about his new job. His uncle, a famous movie director, has asked him to travel to Florida and scout out a location to film a remake of a famous 1950s movie. Anxious to do a good job, Stephen discovers the perfect location, which unfortunately, is located next to a bizarre roadside attraction.

A thick fog blowing off the Gulf of Mexico is making it difficult for the beautiful Savannah Blanchard to find a ride as she hitch hikes along Route 90, just outside of Biloxi, Mississippi. Still reeling from the sudden loss of her job, she is hoping her good friend can put her up for awhile and maybe help her get a fresh start. Savannah holds a dark secret which will soon become apparent to the next unfortunate lonely driver who pulls over to pick her up.

Speeding south from Indiana after a brutal crime wave, tormented Willard Ferguson and his 16 year old girlfriend, Anna Mae, leave a wake of death and destruction behind them. Anxious to find a safe haven from the authorities, they end up taking refuge in an odd attraction called Doctor Merryweather's Menagerie. Rather than offering the solace they had hoped for, Willard and his girlfriend find themselves thrust into a grotesque world far removed from anything they ever thought existed. Several seemingly separate events slowly merge into one, as the Menagerie of Broken Dreams pulls everyone into a dark web of danger, deceit, and murder.

This story had a an interesting concept, a film crew obtain permission to use a swamp like location for their monster film close to what used to be referred to as a "freak show", an entertainment/variety show based around peformers exhibiting their physical deformities. There are murders and deaths. I'm not entirely sure why I can't give it five stars. Perhaps I was disappointed that the film making of a Creature from the Black Lagoon style film itself plays such a tiny part of the book although the characters hang around waiting to make the film a lot. The hidden secret of the barn seems to be a bit of an anti climax considering the spectacular nature of the menagerie itself. making the monster film, the escaping murderers etc. So I felt for me it lacked a focus, a main character to take me through the story and empathise with.
The Narrator Matthew E Berry turns in a perfectly fine performance, uses different voices for the characters, even utuilises a few effects every now and again, (treating his voice to sound like a character is speaking through a microphone at one of the shows for example) However I would have liked to have heard more variety in pace, whether a scene was exciting or sad the delivery was very consistently paced and so became a bit laboured and samey. This might be why I felt the book didn't build towards the end. all in all it was good but not outstandng.

I enjoyed listening to this fun and twisted story so much, with an abundance of eccentric characters, that I listened to most of it twice. I am eager to listen to other books by this author or narrator. I have already recommended the book to others.

WHAT I LIKED MOST:
*So many quirky, eccentric, well developed characters - yet each one was quite believable and you cared about them
*Humanizing the lives of circus, carnival, and sideshow performers gave the story extra merit
*Lighthearted and sometimes sleazy insights into the independent film industry
*Weaving together of three seemingly unconnected plots into a very unique and creative story
*Narrator easily and successfully toggles through the numerous and varied male and female characters
*Story will make a wonderful and colorful movie or TV series; I'm already thinking who should be cast in the different roles.


WHAT I DID NOT PARTICULARLY ENJOY:
*Willard and Anna were a major part of this story. But, I was left wondering about the chaos that they left behind. I would have liked more details.
*What happened to the lobster man was horrific. Yet, there is so little said about the ramifications.


DISCLAIMER: I was given a review copy audiobook by the author, narrator, or publisher at my request and have voluntarily left this review.

Stephen thinks he hit the jackpot working for his uncle. Going to Florida to find a good location for his upcoming movie. Location had an unusual roadside attraction that lead to problems, mayhem and survival..Good narration added to the story with his clear voice. Given audio for my voluntary review.

I loved this book! Scanning the area where 'The Monster from the Black Lagoon' was made,the perfect spot is found for the sequel.It is twenty years later.A circus like set up is nearby with a Menagerie of oddities both living and dead.They have Lobster boy,The wildman from Borneo etc.The people of the town hate the menagerie,the feelings are similar about the townsfolk.Setting up a movie set just makes things a bit more interesting. Matthew E Berry was a terrific narrator. I was given this free review copy audiobook at my request and have voluntarily left this review.'

Easy to follow plot line. Good story arch and characters. The narrator did a great job bringing life to the characters. I enjoyed listening to this book quite a lot. The fact that part of it's plot was about a movie I grew up watching with my late father was even better!

Steven and uncle Philip do it again!

When I first started reading this series of books I had three I hadn’t read yet. Once I started reading and loving these books I consumed all of them and now alas I am done and have to wait for book number four. So bittersweet until then I guess I will have to read other books by this author or books by the narrator or maybe just re-read these books. I love them and highly recommend them.

A place to call home

Another wonderful story by Mr. Nelson heartwarming exciting just great in all respects now I go to number three. I think the author and the narrator did a great job. I look forward to more from you thank you. I would highly recommend this book to everyone.

genre choice but spotted it on AudioBook Boom and requested a copy.

I was surprised at how much I enjoyed the story and the characters.

It was like sitting down on a dreary Sunday afternoon and binging on black and white B movies. For me, a woman almost 60 who cut her "spooky movie" and "Private Dick movies" teeth on the old school black and white B movies...the essence of all those old movies are here in spoken word. I feel a loony saying this, but this book played out in my head like a black and white movie. It's the stuff so many of the movies I watched as a kid are made of.

Teenagers in love go really bad.
Over the top drama queen stars who end up showing their true colors.
The nice guy who gets the right girl but still ends up in a mess.
The woman who was shunned by a hateful father finds peace at last.
The whole town of people who don't fit anywhere, trying to survive and get by...just get by....as they deal with their own struggles inside the community itself....to prevent the local community from burning them out.
The good guy who maybe isn't such a good guy after all.


This isn't just ONE story..it is several woven together in a way that you get invested in each story, each one could stand alone on it's own...and has...in a lot of old school B movies...it's awesome.

The narrator fits right into the "old school" feel of stories. His grasp on dialect, cadence and accents is pitch perfect......his voice isn't smooth but it will lull you into feeling the story as he tells the story. He doesn't "read it".....he tells it thru each character. He handles adding a feminine touch to the female characters in a way that doesn't feel forced, isn't screechy or over pitched.

Locations wise, the author knows his stuff. I have been in all the areas mentioned as the story moves along, even traveled the hi-ways mentioned and he doesn't miss a beat with his descriptions of the areas or the people.

Some rough langue....I'd call it PG 13...overall it is an enjoyable listen without over the top language or gore.

I did receive this book at my request in return for my review.

I really liked this book. It is a good old fashioned mystery in the best sense. It comes complete with a grim menagerie, eccentric characters, and mysterious happenings. It is very well written, and reveals all very satisfactorily at the end. And, of course, Matthew E. Berry's narration is a delight, he did a great job of bringing the many laughs in this marvelous book. I was given this free review copy audiobook at my request and have voluntarily left this review.

Stephen, Uncle Phillip and Jeanette are back! Stephen is searching for a movie location; Savannah is a beautiful woman with a dark secret; Willard Ferguson and Anna Mae are hiding their own secrets; and all of them are connected which unravels in the story amazingly!

James writes very interestingly and uniquely. He creates an amazing build up that does not disappoint! Matt narrates superbly! His character impressions and accents are amazing, it really seems like there are different narrators for the characters!!

Overall, job well done to both James and Matt!! I will be looking for more from you both!!