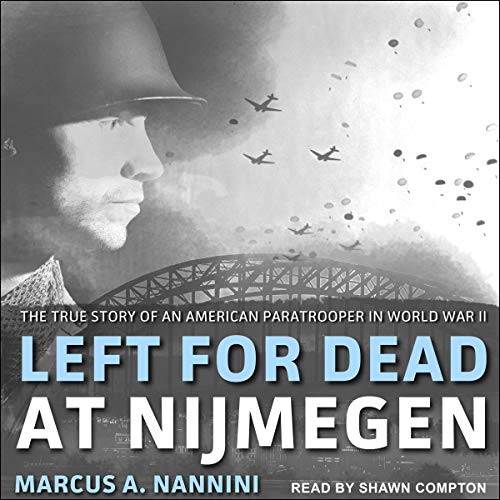 Left for Dead at Nijmegen

By: Marcus A. Nannini
Narrated by: Shawn Compton
Try for £0.00

When Metcalfe boarded the C-47 which would drop him at Groesbeek Heights, just outside of Nijmegen, Holland, he was handed a box of twelve dozen condoms by an overconfident British lieutenant. He was to be among the first to jump into what should have been a picture-book meadow, free of German troops. Instead, it was defended by three German antiaircraft cannon emplacements.

As he jumped into a hail of bullets and exploding shells, he watched his plane roll over and plummet into the ground. It was at that moment he realized the condoms had either been a bad joke or the planners of Operation Market Garden had seriously underestimated German resistance. Gene was listed as KIA and left for dead by his patrol, who presumed the worst when they saw his injuries from a shell explosion.

The rest of his story is equally gripping, as he became a POW held outside Munich, being moved between various camps ridden with disease and a severely undernourished population. Eventually, after making an escape attempt and being captured within sight of the snow-capped Swiss mountains, his camp was liberated by American troops in April 1945.

What listeners say about Left for Dead at Nijmegen

For someone who likes WWII history this is a must to have. What a story. Thank you for your Service

Gene Mercalfe lived a fascinating life to say the least. He was almost forced to forgo WWII service due to blood pressure problems. Thank goodness that didn’t happen. The only problem with the book is the desire to almost slip into first person but then immediately goes back to third. Rather like the author is talking in third person. Other than that it’s very good. Great narration as always by Shawn Compton.

My sixth grade teacher was a war hero!

I loved this book. Metcalf was my sixth grade teacher! Amazing story. He was a foreboding presence when I was 11 years old. Now with adult eyes, I see so much more; I can see through his eyes the experience that shaped him.