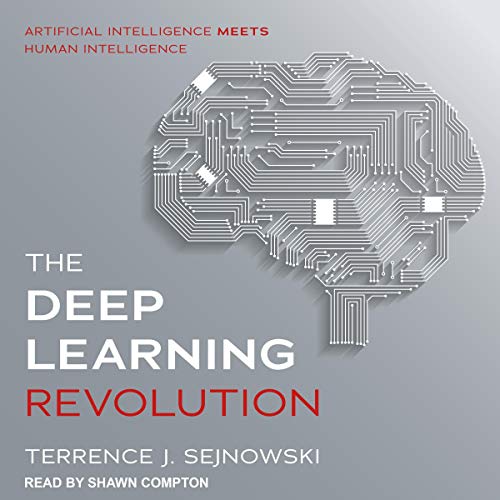 By: Terrence J. Sejnowski
Narrated by: Shawn Compton
Try for £0.00

How deep learning - from Google Translate to driverless cars to personal cognitive assistants - is changing our lives and transforming every sector of the economy.

The deep-learning revolution has brought us driverless cars, the greatly improved Google Translate, fluent conversations with Siri and Alexa, and enormous profits from automated trading on the New York Stock Exchange. Deep-learning networks can play poker better than professional poker players and defeat a world champion at Go. In this book, Terry Sejnowski explains how deep learning went from being an arcane academic field to a disruptive technology in the information economy.

Sejnowski played an important role in the founding of deep learning, as one of a small group of researchers in the 1980s who challenged the prevailing logic-and-symbol based version of AI. The new version of AI Sejnowski and others developed, which became deep learning, is fueled instead by data. Deep networks learn from data in the same way that babies experience the world, starting with fresh eyes and gradually acquiring the skills needed to navigate novel environments. It took nature many millions of years to evolve human intelligence; AI is on a trajectory measured in decades. Sejnowski prepares us for a deep learning future.

"If you want to understand AI, you need to read The Deep Learning Revolution." (Erik Brynjolfsson, coauthor of The Second Machine Age)

What listeners say about The Deep Learning Revolution

An epic story of astronomical import

An excellent history of AI leading to our current explosion in ML/DL, told by one of the few leaders if the field.
Having grown up in this world, I am intimately familiar with all of the characters and their work, books and breakthroughs.... and yet, I could not put this 'book' down, as it ties together all the disparate events, algorithms, personalities, and their relationships in a neat, meaningful way that you could not get from reading ALL of the books, jounals and articles. Furthermore, this is a call to action and awareness, told by a preeminent expert -so you better take heed. I will re-read/listen to this again, to mentally connect all the parts ... and then read it yet again, taking notes and crosslinking to what is happening now.

a lot of facts but lacking overarching theme

I don't know too much about the machine learning field but from the book I get that the author is a leading pioneer. However, the book can sound too self-congratulatory from time to time and that is distracting. The book is informative in the sense that it introduced the history of how machine learning came about in some of the chapters, but beyond that I can't say I gather much insight of the field from the book. I am often confused by the timeline of things as the author appears to be working with so many different institutes at different points in the book (again, on the line of self-congratularoy) and if the book is intended as some memoir, I don't think it is doing a good job.

The book reads like a list of things people achieved in the field over time, but there is little information on how people actually think to come to those solutions. I expected that by listening to the book I can have a big-picture understanding of the field but I can't say I did.

The narration of the book feels so mechanical that I start to wonder if it is actually read by one of the artificial neural networks the author mentioned.

I really loved this book. It gives a lot of great insights into deep learning. I especially liked the section about behaviorism since my background is in psychology and this really peaked my interest in deep learning. I do still have a lot to learn but the book was a great guide. It even recommends online courses to help understand deep learning. I will probably give the book a second listen. I’m not really a fan of the narration. It’s strange to me how the narrator seems to talk with a robot voice. It’s mildly distracting but tolerable.

wonderful read. breath taking fulfilling.
a must read. mix of compsci and biology with physics

loved it. extremely clear, accessible, bold, and engaging. I only hated one sentence, when he admitted that he started a talk at a conference, once, by saying that language is too important to be left to linguists. as a linguist, I'd say that he is unfortunately referring to a small subgroup of normative descriptive linguists, probably, and that many computational linguists, machine learning people, neurolinguists, cognitive linguists as well as theoretical linguists are badly needed in deep learning and related disciplines, cause engineers simply do not know how language works. so, cross disciplinary approaches are the right way to go.

Gripping tale of the story behind intelligence

Terrece systematically explained the advancement of technology behind deep learning and AI in the backdrop of human understanding of biological intelligence. Unless the reader is a specialist in this field, it is difficult no to be amazed at the developments in deep learning, neural networks and AI. This book gives the reader orientation to the modern thought on the subject as he explains the seat of intelligence and how the need to solve problems originated enhanced and shaped intelligence. Enjoyed listening to this book. The narration by Shawn Compton was excellent compliment to the book.

Best book on history and future of deep learning

this is really a testimony as much as it is a review on the topic - the author was and remains a key contributor to the field of AI. The advantage of first hand accounts is that they go a lot further and a lot wider than books by outsiders. In addition to a detailed account of neural computing from preceptrons to multilayer neural networks with time delayed memories, we also learn about related fields like Neurobiology, Artificial Life, and the sociology of learning. This book has a good chance of becoming the reference account for a general audience on the formative years of Artificial Intelligence.

A perfect balance of technical knowledge and historical context for AI and ML. A must for anyone in the field.

Give a good history of AI and where it is going.
Account for a broad spectrum of AI

This should be required by people that want to understand the future and where we are heading.
Well written and extremely and interesting listen to someone who loves the subject of learning… machine or human ;)