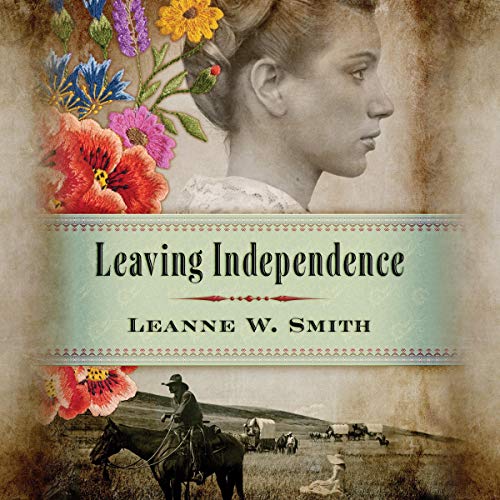 Abigail Baldwyn might not be a widow after all....

Ever since she received word that her husband, Robert, was killed in the Civil War, Abigail has struggled to keep her Tennessee home and family together. Then a letter arrives claiming that Robert isn't dead, yet he has no plans to return. Desperate for answers, Abigail travels to Independence, Missouri, where she joins a westbound wagon train to find him.

Leading a company along the Oregon Trail isn't part of Hoke Mathews's plans. But then the former cavalry scout gets a glimpse of Abigail - so elegant compared to the rest of their hardscrabble wagon community, yet spirited and resilient. Through every peril they encounter - snakebites, Indian raids, fevers, dangerous grudges - his bond with Abigail grows.

Abigail knew this journey would test her courage. Now it's testing her marriage vows and her heart, daring her to claim a future on her own terms in a land rich with promise.

The full copyright information can be found below:

Scripture references are from the Holy Bible, King James Version, public domain, except for those where the New International Version is used. 1 Corinthians 11:15 taken from the Holy Bible, New International Version®, NIV® ©1973, 1978, 1984, 2011 by Biblica, Inc.® Used by permission. All rights reserved worldwide. The John Donne poem "No Man Is an Island," excerpts from A Tale of Two Cities by Charles Dickens, and "The Star Spangled Banner" by Francis Scott Key are in the public domain. Grateful acknowledgment is made to reprint lyrics from the following hymns: "Blue Bell of Scotland," traditional Scottish folk ballad by Dora Jordan and "I Want Jesus to Walk with Me," slave spiritual, author unknown.

What listeners say about Leaving Independence

The story is really good, but I found it unfortunate that it contains a lot of swearing. I think that it wouldn't be necessary.

Enjoyed listening to this one

I enjoyed this story of love on the plains with a few twists. Although I thought the performance was very good, some of the voices were excellent, others didn't seem to match what I thought main male characters should sound like. I enjoyed the Christian elements which were subtle.

This book was not a page turner, but it flowed nicely and kept me interested. I loved it and the performance was perfectly done.

This book was engaging from beginning to end. It was uplifting and inspiring. I loved it!

Liked the attention to detail by the narrator. Good story line. It made me feel as if I was on one of the next wagons on this train.

This was a sweet story-not very deep but something I would enjoy listening to on a long trip. The narrator is very good but not necessarily one of the best I've ever heard. Perhaps it is because I'm a Southerner I found her accent just a little bit forced and over the top at times. Tennessee accents are difficult to do and she does an admirable job- but after about 10 hrs I started noticing it more. I don't know if I will listen to this book again but I would try another one by this author or performed by this narrator.

Narration is outstanding. Loved this story, kept my interest so much so that I didn't do my laundry last weekend because all I wanted to do was listen and not be bothered with mundane chores. Loved all the characters and not to give a spoiler alert, I loved that it had a happy ending. I definitely recommend this one.

Simple fem jep romance. Except for one detail it was completely predictable. Relied on every romance troupe imaginable.

the only disappointing thing is that the book is over! I found myself becoming so attached to the characters in this story, and the vocal performance really helped in this. What a wonderful little story, full of Adventure, hardship, romance, and love on all levels. This book was not some Fantastical regaling of pioneer days, but rather a grounded, realistic retailing of a brave woman's Tale during a wild and adventurous time in history. I adore Abigail Baldwin, and I'm certain that most readers would fall in love with her too. Excellent book, excellent performance. Highly recommended. Great for long drives!

This book kept me hooked from start to finish. I liked the inspiration, hope and strength of all the many characters throughout the journey West on the Oregon Trail.

Where does Leaving Independence rank among all the audiobooks you’ve listened to so far?

One of my absolute favorites. I will definitely re-listen to this title. I listen to 3 to 5 audiobooks a week. That's saying something.

The story was really good! I loved it! Her characters were well written, loved and hated perspectively. I loved the way she had their inner most thoughts and feelings discussed. Making these characters completely relate-able and understandable.

Have you listened to any of Nicol Zanzarella’s other performances before? How does this one compare?

She was the perfect narrator for this story. Can't imagine another voice revealing this story to us.

Several moments. That's what makes the book so good. I really enjoyed so many moments. But my favorite (SPOILER) was him dunking her in the creek. Totally awesome!!!

Nothin' but love for this story!