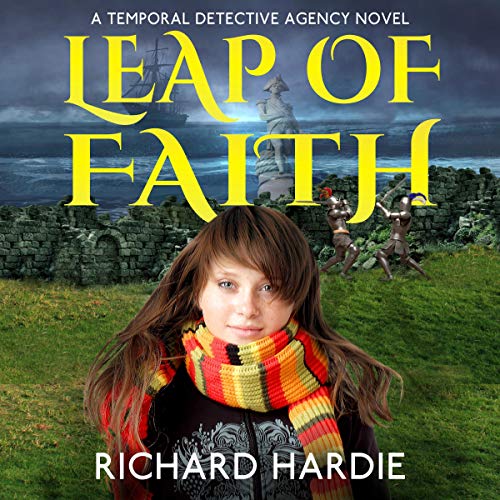 By: Richard Hardie
Narrated by: Penny Scott-Andrews
Try for £0.00

Merlin the wizard is a good-looking, but very well-disguised woman. She's also ambitious and becomes Arthur's mentor, falling in love with him. It's reciprocated, and they elope, leaving the wizard's cave to Tertia, Unita, and Marlene (Merlin's apprentices and her sister).

They start a detective agency, however bored with the lack of fifth century crime, they start up the Temporal Detective Agency and use Merlin's time portal to move from Camelot to the 21st century, where the cases are better. They also take Galahad, now owner of the Ole Grill restaurant, so he can act as their front.

One morning, the portal transports Tertia onto Nelson's column in Trafalgar Square, and then on a temporal diversion to South Wales in 1734, where she joins up with Bryn, a young Welshman, and sees her deadliest enemy - the Black Knight - who she believes to be Bryn's father.

Tertia and the agency try to solve the thefts of the Koh-i-noor diamond and the Mona Lisa. Realising that South Wales and the Black Knight are very much connected with their investigation, Tertia and Unita relocate to South Wales in 1734, where they come up against a gang of vicious ship wreckers, led by their deadliest enemy, the evil Black Knight.

Indeed, within an hour of arriving, Tertia is nearly killed by him. Going undercover, Tertia becomes a teacher in the village school, while Unita becomes a maid in Bryn's father's household.

One stormy night, they're on the clifftop, looking for wreckers, when they're surrounded. Help comes from Sir Gawain, who now lives in the South Wales village as the local squire. He had followed the Black Knight through time to Wales where they continued their fight. Gawain is actually Bryn's father, and has even more reason to hate his enemy after he believes the Black Knight killed his wife.

After convincing the Black Knight that she wants to join his gang of wreckers, Tertia learns where they intend striking next and helps Gawain defeat his enemy and his wrecking thugs in an ambush.

What listeners say about Leap of Faith

Great book worth a read

This is a great adventurous book based around the gower. This is definitely worth a listen and I hight recommend you guys read it.

A mix between a detective novel, a time travelling adventure and a wonderful stream of consciousness. The book is written from point of view of a wonderfully carefree young woman, whose continuous thoughts really makes this story a fun and light hearted read. Would recommend to anyone who likes fantasy or sci-do stories with a bit of a detective twist and anyone who needs a bit of a smile!

A great book packed with lots of adventure and good humour

An entertaining tale of the Temporal Detective Agency's adventures whilst solving their newest case - featuring time-travel, ship-wreckers and smugglers, romance, and some great wit. Keeps you hooked until the very end!

I thoroughly enjoyed listening to Leap of Faith, written by the talented Richard Hardie and narrated by Penny Scott-Andrews. Set in Wales in the time of King Arthur, Leap of Faith tells the story of the Temporal Detective Agency founded by three girls, Tertia, Unita, and Marlene. This is a fast-paced tale with time travel, mystery and sword fights. What more could you want? You’ll quickly find yourself wrapped up in this tale and carried along til the end.

An exciting listen, from the first word to the last.

Leap of Faith is a fast-paced, light-hearted and well-executed novel. The brilliant, first person narration throws you straight into the story, instantly submersing the listener.

The book is both well written and well read. The narrator clearly understands the characters and brings them to life. Overall, an exciting audio and well worth listening to.

I really enjoyed the daring Tertia and Unita. The trouble they got themselves into and out of.

In an original twist, this book combines Arthurian/knights of the round table lore with time travel with a contemporary twist that makes this story unique and a delight to follow. Although this is a swashbuckling tale aimed at young adults or teenagers, familiar names like Sir Gawain, Merlin and The Black Knight aka Mr Schwartz have always held a certain appeal for older readers - and I am no exception.

Hardie's work, the first in his temporal detective agency series, is cleverly original in its contemporariness, while it pays homage to legendary tales of the age of chivalry. Traits like loyalty, friendship and filial love shine through, balancing the darkness and cunning of the book's antagonist wonderfully.

I wasn't overly fond of the narrator's voice with it's slight lisping tendency, which detracted a little from my overall enjoyment. Taken altogether, though, this is a very good listen and a promising start to a series!

It's Quirky, Fabulous, and Fun.

Leap of Faith is a light hearted tale in which you can expect to meet some of the characters from Arthurian Legend. But not as you know, or might remember them! Therein lies the magic of Richard Hardie's, unique storytelling. If you are looking for something different... This is great entertainment!

I am a newbie with 'Audible' having always read my books in paper book form however I was given the opportunity to listen to 'Leap of Faith' and found the whole experience gratifying.
My other hobby is sewing patchwork and I found I could follow the exciting twists and turns of the storey with only the occasional risk of sewing too fast or stopping altogether as I listened to what happened to Nelsons Column and Marble Arch and the Black Knight and all the female wizard detectives - power to the sisters.
If I'd been reading a book - my patchwork wouldn't have got as far as it has. It was meant to be a tablecloth but now it's destined to be a double Quilt and sometimes I listened to the tape when I'd gone to bed purely because I wanted to find out what was happening next.
The narrator was also expert in making the characters come alive - thank you Hazel Honeywell - a modern day magical trip.

The synopsis was intriguing, but I couldn't tolerate the reader. I had to quit. Unless you like a pinched, nasally voice with an accent that sounds affected, don't bother with this book.

I thought this was a really fun listen. Quirky, adventurous, and attitude. I am no Arthurian Legends expert, but I knew enough to understand the characters. I do not mind a gender swapped role, and it was tangential to the story, so it should not bother anyone. I am not saying this story will win any awards, but I hope to read more with these characters. My only down side was the narrator. She wasn't bad, I personally just found her voice a bit scratchy. She was generally pulling off the voice of a young girl, but it sounded like she had recently been yelling, and needed to recover. Not enough to keep me from reading more, but some thing that could be improved.

An interesting, unique story, with a likable main character and a good narrator. Look forward to part two.

This was a really good, giggle filled story interspersed with some laugh out loud moments that garnered me some odd looks in the office. The Olé Grill killed me. I'm looking forward to the next story.

Leap of Faith by Richard Hardie is a delightful listen. I so enjoyed this time travel detective book. The characters are endearing, the descriptions are vivid, and the narrator is energetic. Penny Scott-Andrews was great performing the book. I really enjoyed this clever and humorous listen.

No spoilers - listen to this book. Can’t wait to see what the detectives get up to next.

I really enjoyed this book. It has comedy, romance, mystery and time travel! What more could you ask for? This is a YA book but I found it to be so interesting and funny.

This is a really cute book, especially in the YA category. The narration really makes it. There are several twists and turns that might get a bit confusing for younger listeners, but overall it’s well written. The characters aren’t as well fleshed out as I’d have liked but I’m hoping there will be more agency business in the future, giving the listener the opportunity to learn a bit more background story.