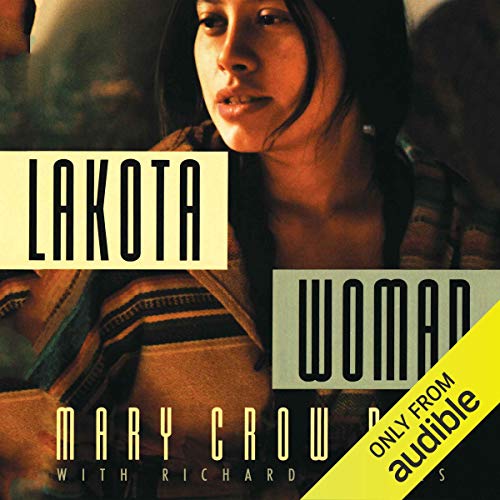 Mary Brave Bird grew up fatherless in a one-room cabin, without running water or electricity, on the Rosebud Indian Reservation in South Dakota. Rebelling against the aimless drinking, punishing missionary school, narrow strictures for women, and violence and hopeless of reservation life, she joined the new movement of tribal pride sweeping Native American communities in the '60s and '70s. Mary eventually married Leonard Crow Dog, the American Indian Movement's chief medicine man, who revived the sacred but outlawed Ghost Dance.

Originally published in 1990, Lakota Woman was a national best seller and winner of the American Book Award. It is a unique document, unparalleled in American Indian literature, a story of death, of determination against all odds, of the cruelties perpetuated against American Indians, and of the Native American struggle for rights. Working with Richard Erdoes, one of the 20th century's leading writers on Native American affairs, Brave Bird recounts her difficult upbringing and the path of her fascinating life.

What listeners say about Lakota Woman

The story of Mary Crow Dog was wonderfully written, but the story spoke in a white womens voice takes away from the actual suffering of the Indian people. I would have liked to hear the story spoken by the author or an Indian woman instead.

As a Native woman, this book has been on my radar for years. I was very interested based on the title alone and the notoriety of the author’s last name. I was sorely disappointed. Mary Crow Dog, while admirable in her role and actions in AIM, comes off as trite and stereotypical. Her portrayals of Native men and Native women is condescending and rude. Her references to white people as “honkies” and police as “pigs” is out of line. That being said, there are some wonderful parts of the book, such the first had accounts of Wounded Knee and relationship with Anna Mae Aquash. A big issue for me was the narrator. Her mispronunciations of Lakota words and their awkward intonations, probably due to not understanding what certain words meant, were grating. I believe the narration may have also played into my dislike for Mary. I had to stop the book multiple times and almost quit altogether simply because the narration was so poor. Audible really needs to hire Native people to narrate books like Lakota Woman.

Sad Day on the Reservation

What made the experience of listening to Lakota Woman the most enjoyable?

I wasn't aware of all of the strife that went/goes on at a reservation and this certainly opened my eyes to the problems. It is very sad commentary on what has been done to the Native Americans.

No not that I remember but her performance was very good.

Don't learn this in history class

Amazing depiction of a woman's journey growing up Lakota as an activist, as a woman and the struggles of life of just being native. Highly recommend.

I read this book when I was still in high school and loved it. decided it was time to listen to it can't wait. I highly recommend it its well written.

What made the experience of listening to Lakota Woman the most enjoyable?

I liked the flow... Her story was sad & empowering

What other book might you compare Lakota Woman to and why?